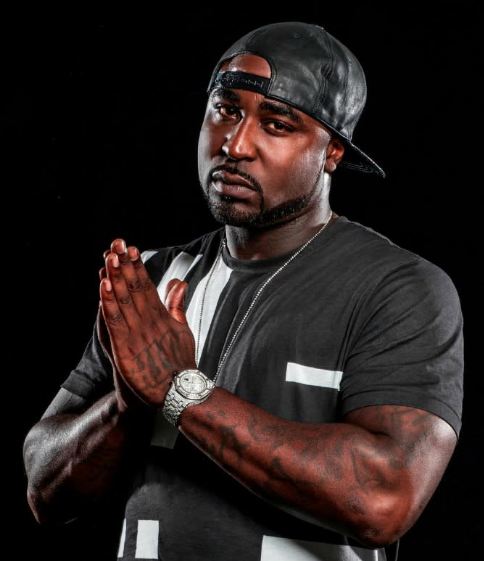 Having earned unprecedented success, G-Unit eventually disbanded. In the years that followed, Buck and his fellow members engaged in countless feuds. The grimmest of them came in 2019 when 50 Cent - the group's leader - accused him of being a closeted gay.

It all began when 50 took to Instagram, accusing Buck of having a sexual relationship with a transgender woman named GlamourPurfek. While threatening to leak private videos with alleged partner GlamourPurfek, the In Da Club hitmaker insinuated that Buck might be gay. Responding to the gay allegations, the Nashville, Tennessee-native stated,

“Let me address this real fast real quick … ain’t shit gay about me... "

With the given statement, there is no place for any gay allegation or speculation. Making the singer a straight man.

Apart from gay allegations, let's take a look at the artist's romantic and married life.

Does Young Buck Have a Wife?

Tanee McCall is a real estate agent, actor, model, and dancer. The husband and his former wife Tanee reportedly got married in July 2005.

The reason for the couple's split is still unclear, but his former wife now has a beautiful family of four, and they look very happy together. However, by Buck's accounts, he doesn't have a wife & is focusing on his career at the moment.

Before making his mark as a G-Unit affiliate at the turn of the century, the Hip-Hop veteran made a name for himself as a close confidant of New Orleans-based rap label Cash Money.

Standing at the height of 6 feet (1.8 m), the "Get Buck" hitmaker boasts a humongous discography with memorable songs such as Can't Lose, I Know You Want Me, Stomp, You Ain't Going Nowhere and Bonafide Hustler, to name a few.

Over the years, the father of three has released an aggregate of eight studio albums, four of which as an independent artist through his label Cashville Records.

According to Celebrity Net Worth, Buck's net worth falls to $100K despite the RIAA-certified musical projects. It wasn't always the case, though. At the height of the G-Unit days, in 2004, the star splashed over $600 thousand on the house in Tennessee.