By LRU Writer | On: November 24, 2019
Yungblud's dating life remains under speculation, his ex-partner has moved as...his girlfriend gifted him a guitar that year and...dating rumors with Anais Gallagher, daughter of prominent British singer 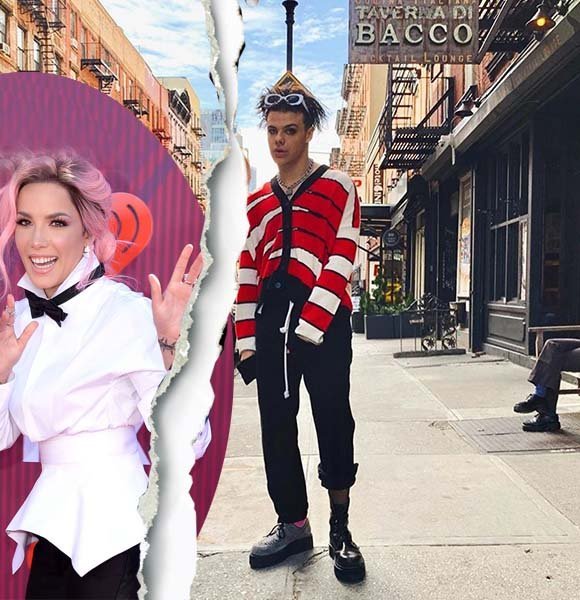 Less than three months of his split from ex-girlfriend and Yungblud seems to be back in the dating game again.

The artist (birth name: Dominic Richard Harrison) has been making headlines with his dating rumors with Anais Gallagher, daughter of prominent British singer Noel Gallagher. Speculations from the tabloids are on the rise after his rumored girlfriend shared a picture on 22nd November 2019 featuring the two in a striped matching outfit.

Alongside the picture, Anais captioned,

"Pick your striped fighter! Is it A) Anais ‘darling I was swaddled in cashmere’ Gallagher or B) Dominic ‘it’s called making a statement’ Harrison." In the photo, Anais was spotted looking at the singer with a starry-eyed expression. Moreover, it appears that the songwriter has managed to make an excellent impression on her with his music.

On the night of Yungblud's performance at London's Brixton Academy in November 2019, his supposed model girlfriend joined as an audience. On top of that, she even accompanied him backstage, and they also spent the evening together.

However, neither of them has yet commented on their relationship status. Interestingly, even if the two initiate a dating affair, there is a probability that Anais' father Noel won't be taking the news lightly.

It turns out that Yungblud had once appeared at Noel's party event uninvited and made a terrible impression on his rumored girlfriend's father.

Before making headlines with Anias, Yungblud was in a committed relationship with American pop singer Halsey (real name: Ashley Nicolette Frangipane). Reports of their dating first started to surface online in November 2018. A month later, the pair made it official by posting a picture of them getting cozy together.

Further, Halsey even gifted him a guitar, which he ended up using at the pair's performance at iHeart Radio Awards 2019. Likewise, a year later, the lovers collaborated on the song, 11 minutes. But, in September 2019, the two broke up without citing the reasons behind their split. Halsey later addressed the breakup with a tweet in October, which read,

“Sometimes. People just break up. It doesn’t mean someone cheated or something bad happened or someone f—ed up. Sometimes. It just happens. Because life is constantly changing. And adults stay friends and move on.”

Furthermore, the rock artist disclosed about their mutual separation citing,

“Me and my ex-girlfriend are good mates now. That ended mutually. We had too much going on. We were too busy. We were going on our own missions. She’s doing her thing, I’m doing my thing and in terms of it, I’m feeling love from everywhere."

As of now, while the singer's dating life remains under speculation, his ex-partner has moved on as she is dating American actor Evan Peters.