By LRU Writer | On: April 07, 2021
Zoe Lyons, a stand-up comedian by profession, is blessed with a blissful love life...She shares romance with her girlfriend-turned-wife...with whom she has been together for...years...The couple met back in...at...which sparked the romance between them...Since then the pair is inseparable... 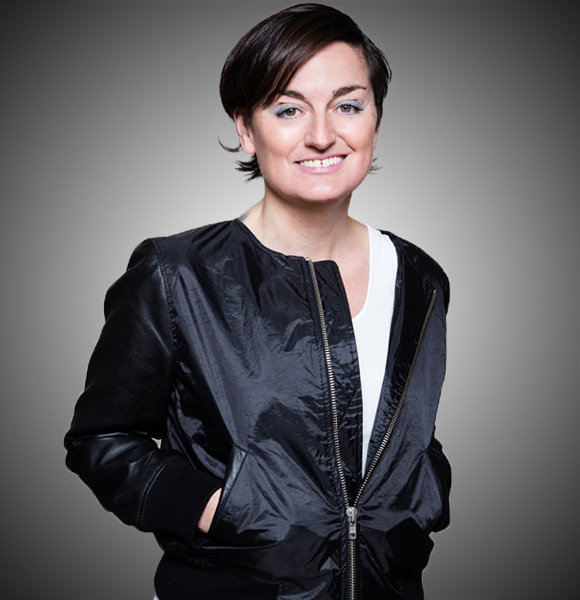 British comedian Zoe Lyons has earned both name and fame for herself through her humorous performances as a stand-up comedian.

Apart from her growing career as a comedian, Zoe has a personal life where she shares a loving relationship with her partner. As far as the reports go, she is already married to her girlfriend-turned-wife, who is more of a blessing to her.

They have been together for years and are still going strong while changing the values on traditional relationships.

Zoe Lyons, the Funny Women Awards winner of 2004, has been lucky when it comes to love. She is blessed to have found someone in her life who loves her dearly and is willing to spend every single day with her.

The couple has a lesbian relationship at its finest which evolved 20 years back on the Isle of Lesvos. Back when Zoe was with her friends celebrating life on the Isle, she first crossed paths with her now girlfriend-turned-wife, Sindy De Jong.

The Wales native had apparently lost a tequila challenge with her friends, due to which she was hell drunk when she first saw Sindy. Zoe's friends tried to put her into the van, but she slid straight across the seat and fell out of the van. Sindy picked her up and helped her into the van.

It was the first time their eyes met which instantly sparked romance between them. For Zoe, it was love at first sight.

During that time, Sindy was living in Holland, and Zoe had her room in London as she was taking baby steps into her career. As time passed and their romance prospered, the couple moved in together.

After 18 months of dating, Sindy moved into her lesbian partner's London apartment. Until then, the pair had been maintaining a long-distance relationship.

Zoe is married to her wife, Sindy De Jong. However, there is no exact date of the ceremony, but back on 14 December 2014, she tweeted "Married," which suggested she got married on the very day. Then came an article on May 2020 that wrote the couple had been married for fourteen years. Zoe Lyons with a pet dog in her new home, which she shares with her wife, Sindy. (Photo: Metro. news)

Being blessed with the love of her life, Zoe has not missed out on any chance of admiring it. She does know how to value important things in life.

Zoe, who stands at a height above 5 feet, often posts on her social media, cherishing her wife's presence in her life.

You may also like: Even After Three Children, Laura Ingraham: Still Not Married, Fending Off Any Issues of Husband and Divorce

Although they have a huge age difference of 14 years, the gap is not at all visible because of the chemistry they have.

Now the couple lives together in Brighton.