By LRU Writer | On: October 10, 2018
Film director Trevor Engelson gets tied in a matrimonial knot months after ex-wife chooses to go "royal." Meghan Markle's ex-husband, Trevor married his longtime girlfriend Tracey Kurland, a nutritionist by profession, in Southern California over the weekend. 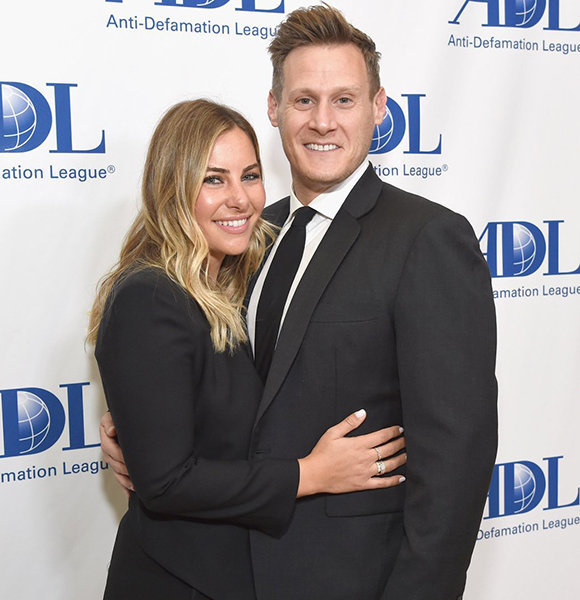 Meghan Markle's ex-husband, Trevor married his longtime girlfriend Tracey Kurland, a nutritionist by profession, in Southern California over the weekend. According to DailyMail, the pair tied the knot in an intimate ceremony attended only by close friends and family on Saturday night.

The wedding took place in a private property in the exclusive Hidden Hills, California.

For the ceremony, Trevor was dressed up in a gray suit and pink shirt while the bride looked flawless in an off-the-shoulder mid-calf white dress. Trevor Engelson with his bride, Tracey Kurland on their wedding day (Photo: Instagram)

Trevor's bride, Tracey is no less royal than his ex-wife for she is the daughter and heiress of Stanford Kurland, a multi-millionaire banker and founder-CEO of mortgage lending company PennyMac.

Tracey is a Los Angeles native who graduated with a bachelor of arts from the University of Southern California in 2008. She also has a Masters degree in Science and Nutrition Education from the Teachers College of Columbia University and is currently working at The Renfrew Center located in L.A. as a registered dietitian since 2015.

She then completed her master of science in nutrition education at the Teachers College of Columbia University. New York, in 2014. Kurland has worked as a registered dietitian at The Renfrew Center in Los Angeles since January 2015.

Trevor and his wife had earlier started dating in November 2017. Trevor, aged 41, later proposed her for marriage in June 2018; two weeks after the wedding of Prince Harry and Meghan Markle.

Previously, Trevor was married to actress Meghan Markle for two years. The former couple had first met in 2004 before Meghan became a household name from Suits after which the pair started dating.

The duo dated for nearly six years before finally getting engaged in 2010. The former husband and wife got married in September 2011 in a beachfront ceremony held at the Jamaica Inn in Jamaica. The wedding ceremony was attended by nearly 100 guests which included close friends and family.

However, soon after the marriage, the pair started developing differences and the feud between the partners became apparent when Meghan moved to Toronto, Canada for the shooting of Suits.

Trevor and his former wife eventually separated in the summer of 2013 but were still legally married until 2014, when they got legally divorced. The couple cited "irreconcilable differences" as the reason for the divorce in the divorce papers.

Additionally, Trevor also dated RHONY star, Bethenny Frankel in the past; however, the pair broke up after dating for a short while.