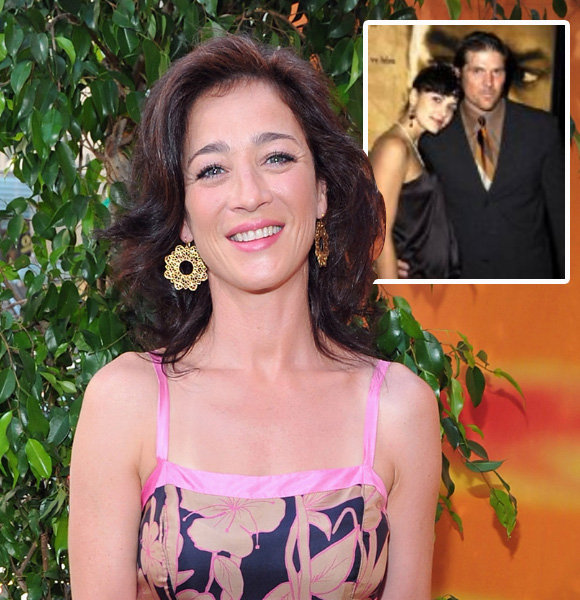 Ever since appearing in the political television drama The West Wing, American actress Moira Kelly has been an unforgettable presence in the series.

As committed Moira is to her profession, the same level of commitment and dedication shows in her long-lasting relationship with her husband.

While she has left a big mark in her audience’s hearts with her astounding portrayal, she has equally garnered attention regarding her notoriously private personal life.

But, her preference of keeping her personal affairs away from the limelight has sure gotten her curious fans restless to learn more about it.

Moira Kelly’s Life with Her Husband

If you are a hardcore admirer of the actress, you might have skimmed through her social media. But, to your disappointment, there is not much to find out about her on social media as she is not a social media person.

However, it is known that The West Wing actress is married to her husband, Stephen Eric Hewitt. Unlike Moira, her husband does not belong to the entertainment industry. Instead, he is a Texas-based businessman by profession.

Although she remains quiet about her married life, her resounding marriage has inspired her previous co-star, Hilarie Burton, with whom she shared screen for the series One Tree Hill. Moira Kelly in a scene from One Tree Hill (Source: Pinterest)

As reported by People, Hilarie once shared how Moira’s advice helped her build her own family. Hilarie elaborated that Moira saved her life by giving her permission to leave the show, One Tree Hill in 2009.

She further stretched that when she was in dilemma whether to continue doing the show, Moira maturely advised her to ‘run’ and start the new chapter of her life.

Valuing her opinion, Hilarie left the show, and she could not be happier about her decision. Inspired by how Moira prioritized her family above work, Hilarie wanted the same for her. Now, Hilarie is a mother to two children from her husband of several years.

Hilarie’s confession about how her happy married life came to be, says a lot about Moira’s resounding life with her husband of over two decades.

More on - All about Simone Ashley's Parents & Impressive Net Worth

It would not be unfair to say that she learned the values of family growing up in a household where her parents were the prime example of a happy married life.

Born in March 1969, The West Wing actress was brought up with her five siblings. Her parents, Irish immigrants, settled in Long Island, where Moira grew up.

Her mother is a nurse by profession, while her father is a violinist—no wonder where she gets her artistic gene from. Moira Kelly in a scene from Christmas In Louisiana (Source: Facebook)

After Moira received her education, she pursued her career in acting in 1984, and it did not take too long for her to mark her place in Hollywood with her astonishing talent.

After her decades-long career in entertainment, she sure has marked her prominence, but never once did she let her profession jeopardize her personal relationship. Indeed, she is a big family woman at heart and an inspiration to countless of her admirers.