Omotola Jalade-Ekeinde's Happy Married Life- Who Is Her Husband? 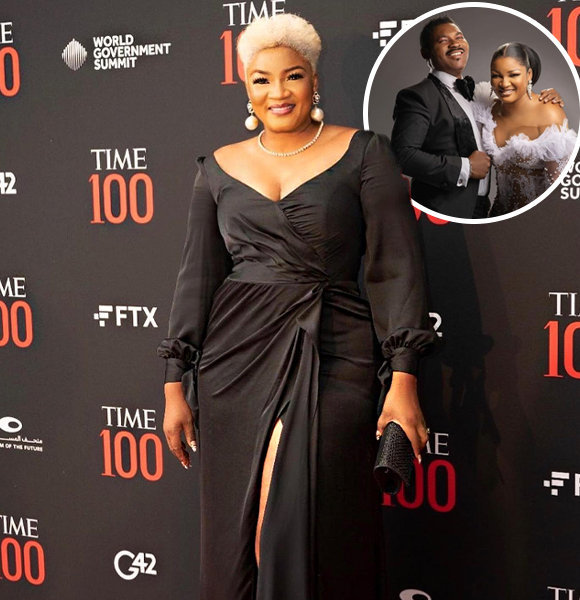 Omotola Jalade-Ekeinde, a Nigerian singer, actress, and philanthropist, is a well-known personality in Nollywood. Her married life with her husband is as successful as her profession.

Let's take a look at the reason behind her long-lasting marriage.

Omotola's husband, Captain Matthew Ekeinde, a pilot and businessman, has been by her side for many years. They initially met when she was sixteen, and he was twenty-six.

The couple fell for each other connected at a chapel in Iyana Ipaja. They got acquainted through Captain Matthew's sister and quickly became friends.

The moment Omotola turned 18, Captain Matthew proposed to her for marriage. They had a court marriage on March 23, 1996. After five years of marriage, the couple held a white wedding ceremony in 2001 after they welcomed their third child. Omotolo shared an old picture with her partner. (Photo: Instagram)

Omotolo and Captain Matthew are proud parents of four children, two daughters, and two sons. All of their children are pursuing their dreams.

Princess Ekeinde, the eldest child of Omotola, loves to cook and holds a master's degree in tourism and hospitality management.

Matthew Johnson Ekeinde Jr., better known as Captain E, her first son, is more interested in music and decides to pursue a career in the music sector.

Meraiah Ekinde, her second daughter, is a popular model and fashion designer in Los Angeles.

Michael Ekeinde, her youngest son, has expressed interest in the movie industry and will soon follow in his mother's footsteps. Omotola's vacation in Dubai with her hubby and children. (Photo: Instagram)

Omotola supports her kids in the same way her husband backs her up.

The 'Temple of Justice' actress has frequently praised her husband's support in interviews. The couple has been working together to manage their home.

In an interview, Omotola mentioned how her spouse does grocery shopping while she handles cooking. She also adds that her husband is her biggest fan and has watched her every movie or Tv show.

In addition, she shared how her hubby has framed the posters of her films everywhere in their house.

Nollywood has always loved them. But every couple experiences a challenging period.

In 2021, Omotola and Adams Oshiomole, the former governor of Edo state, were said to be having an extramarital affair.

The rumor started after a picture of Omotola and Adams together was uploaded on the well-known blog Gistlovers.

However, there wasn't any information about their relationship, so it wasn't clear that she had an affair.

Find Out: Mara Brock Akil and Her Husband Still Feel Like Newlyweds!

Fans of the couple were worried about them divorcing. But, instead of a divorce, the couple worked out their differences privately and decided to stay together.

They have been together for over 26 years and are still going strong. 'The Island' actress has been living a happy and comfortable life with her family of six.