By Asmita Neupane | On: October 28, 2021
Stephanie Ramos & her husband just completed their 11 years of marriage and the duo's rare wedding picture is sure to leave you in awe. 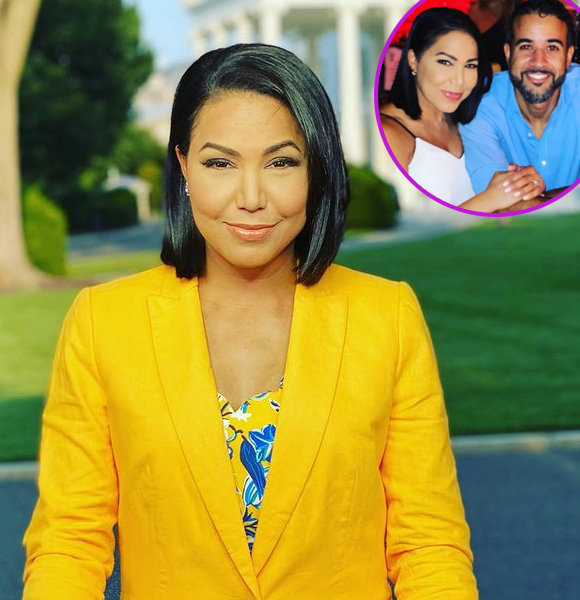 "Celebrating 11 years of marriage! So happy to celebrate and reminisce with this bunch. Heart full,"ABC News

Indeed her 'heart full' 'gram post where she flaunted her pictures with her husband, Emio Tomeoni, and close ones is enough to reflect her happily married life.

As the Instagram post suggested, the couple had a cozy anniversary celebration, dining at a restaurant with their dear ones. Congratulatory messages came flooding in the comment section. Stephanie Ramos and her husband celebrating their anniversary dining at a restaurant (Source: Instagram)

While her husband is barely active on social media, Stephanie makes sure to treat her followers with sneak peeks of her happy love life.

Another one of her adorable couple posts is from Valentine's day of 2020 when she took to her 'gram to wish her beau on that particular day. Her caption read as,

DAY LATE but must contribute! This Valentine’s Day I’m reflecting on the amazing love and friendship I’ve found with this guy. Hope everyone had a lovely Valentine’s Day.

Moreover, reminiscing back to her wedding day on September 6, 2010, she uploaded a rare glimpse of her wedding ceremony photoshoot.

In the monochrome picture, where the bride and groom shared a loving smooch, Stephanie looked flawless on her strapless sweetheart-necked white gown that perfectly complemented her physique with an A-line silhouette. At the same time, the elbow-length veil made her appear as a dreamy Disney princess. Though their wedding marks their eleventh year this year, they have been together for sixteen years and are parents to two sons, Xavier Tomeoni and Gio Tomeoni.

More on - Does Jennifer Grant Have A Husband? All About Her Children

More On Her Husband & Kids

Stephanie's husband Emio is currently a founder at Emio Created Media, where his association dates back to 2014.

The St. John's University graduate began his career in media in 2005 when he worked for Page.

Working there for a year, he later joined NBC News in 2006 as an associate producer.

Despite Emio and Stephenie's demanding careers, they rejoice in their parenthood, raising their two kids with all the love they need.

As seen in the journalist's Instagram handle, the proud parents seem to be closely bonded with the kids who are seemingly below the age of ten years. In a post from May 9 on the occasion of mother's day, the proud mother shared some old pictures of her kids on her 'gram and captioned it as,

It’s not an easy job but being their mother is my absolute favorite. Happy Mother’s Day to all the expert multi-taskers.... moms. Indeed raising kids is not an easy job, especially when you have a profession that demands most of your time. But, it's wonderful to see how effortless Stephenie makes it seem to take both her personal and professional life parallelly.

Get to know - Is Joshua Johnson Finally Married To His Partner?

Stephenie Ramos, age 31, has established herself as a notable journalist through the years of her versatile professional journey.

Before coming into the broadcasting media, she served as a 1st Lieutenant in Iraq in 2008. For her outstanding service unmilitary, Stephanie earned several medals that included Military Outstanding Volunteer Service Medal, Global War on Terrorism Medal, and so on.

Her impressive accomplishments do not stop there. She found her place amongst the noticeable journalists as soon as she stepped into broadcasting.

Starting as an anchor and reporter for the broadcasting network KMBC, she was most recognized for her coverage of immigrant children crossing the borders of Mexico to the U.S.

Presently she is serving as a reporter at ABC News, where she probably has an annual salary of around 100 thousand dollars based on the average salary range reported by Glassdoor.