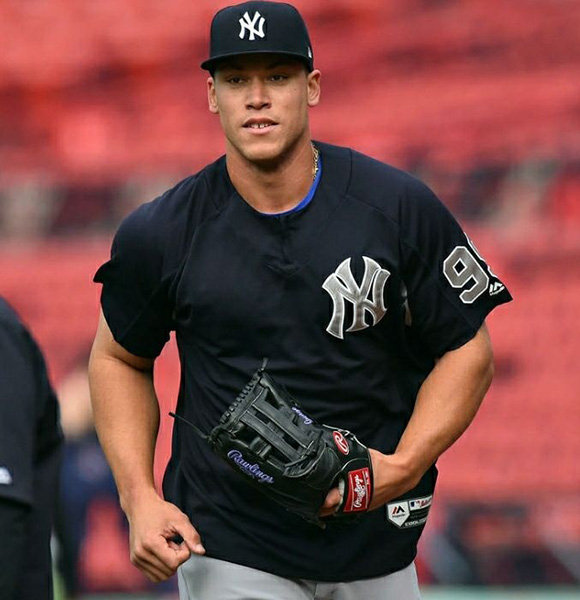 A New York Yankee, Aaron Judge, excelled in every sport he engaged in!

With his successful career in sports, he credited his different ethnicity parents' supportive nature as the primary source of inspiration. Overlooking his story, it appears that his journey as a professional baseball player would not have succeeded if not for his family.

Let's take a deeper look at his upbringing.

New York Yankees outfielder, Aaron Judge, was born on 26 April 1992 in California. His biological parents' whereabouts are unknown as he had been adopted right away after birth.

His adopted parents, Patty and Wayne Judge, are physical education teachers. They have beautifully raised him, thus making him capable of what he is today. He was raised alongside an older brother John, who was adopted as well.

By the age of 10/11, Aaron had realized that he looked different than his father and mother. He confronted them about his appearance, and that was when only he came to discover the truth about his origin. The 2017 MLB Home Run Derby winner talked about the incident with MLB.com in May 2017,

Who are Aaron Judge's parents? Well, no one knows the answers.

Being raised by white ethnicity parents, he never discovered his true ethnicity, but the baseball star pretty much reflects the bi-racial native. Aaron has even claimed that he would not be a Yankee without his mom. His remark made the audience google more information about his white ethnicity, mother, and father.

Aaron is proud of his adoption and regards his mother as the best teacher in his life. He told Newsday in June 2017:

“Some kids grow in their mom’s stomach; I grew in my mom’s heart. She’s always showed me love and compassion ever since I was a little baby. I’ve never needed to think differently or wonder about anything.”

Though the 6'7" tall athlete does not stay with his family due to his sporting career, he always showers his mother with flowers every Mother's Day. He considers himself fortunate to have had a supportive family. Aaron expressed his feeling in New York Post profile in 2015:

“I feel they kind of picked me. I feel that God was the one that matched us together.”

But his American nationality parents seem to be more proud of him as well as his brother, as they explained in the post:

“Both of our children are adopted. Aaron has an older brother, John, 29, who is teaching English in Korea, and we’re real proud of him, too. Really, it was all meant to be."

Although Aaron hasn't talked much about his brother, he always acknowledges John's contribution to his accomplishment. He has repeatedly stated that his family has given him a lot of support in his career.

The American nationality sportsman charmed his sports skill during his time in Linden High School. He is involved in basketball, football, and baseball. But later, he chose baseball to enhance his skills.

During his freshman year, the baseball outfielder played football and impressed others with his skills. Well-known schools like Standford and UCLA wanted him to play for them, but he rocked on his passion for baseball.

At the age of 30, Aaron has impressed the world with his thrilling performance as his disciplined manner and abilities have fueled his firing career.

More importantly, he credits all his success to his mother. He disclosed to New York Post that his mixed-ethnicity family was amazing and taught him many life lessons.

He remarked that his mom had significant influence over his every decision, making his career with the New York Yankee possible.

Describing her as a caring individual, the 2017 Silver Slugger Award winner said:

"The guidance she gave me as a kid growing up, knowing the difference from right and wrong, how to treat people and how to go the extra mile and put in extra work, all that kind of stuff. She's molded me into the person that I am today."

The retired school teachers always taught Judge to prioritize his education first, and their advice led him to live a higher standard of lifestyle.

Though his retired parents cannot take their time to attend Aaron's every game, they never miss watching his game on TV. His mother and father were also invited all the way from California to the New York Stock Exchange in December 2016 to inaugurate the fame by ringing the opening bell.

Aaron has amassed a huge fortune with his parent's guidance and his dedication to baseball. According to Celebrity Net Worth, Aaron has accumulated a net worth of $10 million.

As of now, Aaron has got married to his long-time girlfriend, Samantha Bracksieck. Aaron will hopefully pass down to his children the same values his white ethnicity parents gave him.

Stay tuned to get more updates on Aaron Judge.