Actress Arianne Zucker is Dating Again After Divorce with her Former Husband! Well, Who's her Lucky Boyfriend?

By LRU Writer | On: May 15, 2019
Actress Arianne Zucker is Dating Again After Divorce with her Former Husband! Well, Who's her Lucky Boyfriend? Love knows no limits when it comes to finding the right person. Arianne Zucker, famous as Nicole in “Days of our Lives,” has found her new soul mate Shawn Christian after dissolution with her former husband, Kyle. Arianne and Shawn have been dating each other since 2014. Let’s have a sneak peek at Arianne’s personal life.

Love knows no limits when it comes to finding the right person. Arianne Zucker, famous as Nicole in “Days of our Lives,” found her new soul mate Shawn Christian after dissolution with her former husband, Kyle.

Arianne and Shawn have been dating each other since 2014. Let’s have a sneak peek at Arianne’s personal life.

Arianne and her boyfriend Shawn began sharing love and affection soon after they started dating in 2014. They went for skydiving in Sydney at the beginning of their relationship in early 2014.

Nothing typified the Days of Our Lives co-stars turned lovers' commitment to each other than the house they bought for $1.4 million in the same year as they commenced dating.

The lovebirds' seems to keep her new relationship smooth and steady since there is no news regarding conflicts between them. Arianne and Shawn were feeling cloud nine at the top of Sydney Harbor on 26 March 2014 (Photo: Dailymail.co.uk)

The couple posted the same picture on their respective Instagram accounts quoting each other “protector” and “guide.” Arianne and Shawn along with her daughter from ex-husband, Isabella Reese Lowder, got spotted skating together in 2017.

The lovebirds' dating life continued to flourish well into the year 2019. Their respective Instagram handles is living proof. To their credit, the duo makes every moment count. Whether it's New Years Day celebration or Valentine's Day or birthdays, Arianne and her husband prospect, Shawn celebrates the occasions in the most spectacular way.

Celeb With Knack For Creative Partys:- Does Alessandra Garcia Have Dating Affair or a Boyfriend? It'd be a Surprise if She Doesn’t

Back in 2018, they hinted relationship upgrade by putting their Californian house for rent. Sadly, no news of further development came afterward.

Friends With Husband Despite Divorce; Pregnant After Reunion

Arianne and Kyle Lowder met each other in 2000 during the cast of Days of our Lives. The friendship soon converted to a love affair followed by their wedding on 3 August 2002.

There were no disputes between them until 2007. The separation didn’t last longer than a year. Soon in 2008, they reunited, and Arianne got pregnant with a baby girl. Their daughter, Isabella arrived in 2009, right after the reconciliation of the pair. Arianne and Kyle after their reunion at Emmys where Arianne flashed her baby bump (Photo:- celebritybabies.people.com)

In a joint statement released on Soap Opera Digest, she shared,

"In response to ongoing inquiries, we would like to announce that with respect to our privacy, we quietly separated a while ago and are officially divorced. We continue to remain great friends and loving parents to our daughter."

"Ari was like, ‘I love you. We love each other, but you’re 21 years old. If you need to experience life, go out, and do it. I don’t want us to be married and all of a sudden for you to have a crisis,’”

Unfortunately, Arianne and Kyle announced their divorce after 12 years of relationship in 2014. This separation was heartbreaking for their beloved fans, but the couple could not convey the appropriate reasons for this act.

Reportedly, the main reason for their divorce is rumored to be the age gap between the couple and different values in their career. Regardless of the failed marriage, they stayed good friends and caring parents to their 9-year-old daughter. 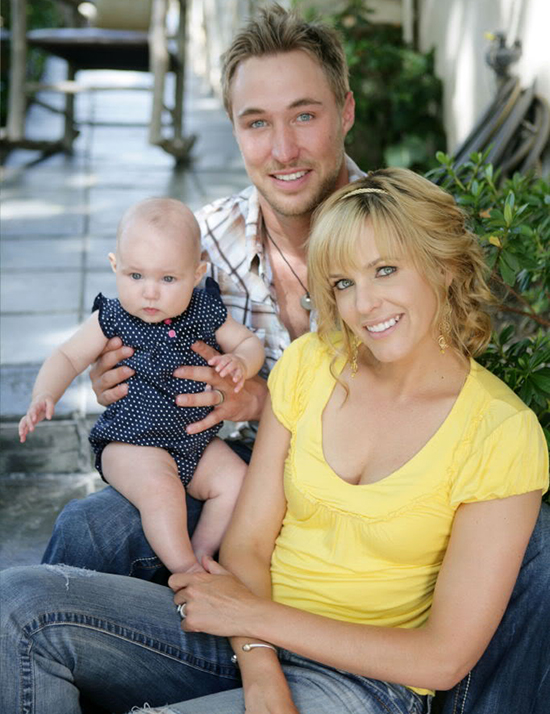 Kyle and Arianne with their daughter Isabella (Photo:- Photobucket.com)

Arianne is now happy with her new boyfriend, Shawn Christian. However, there aren’t any hints where this relationship is heading. Now that Arianne knows Shawn is her new life, she seems content with her decisions and Shawn Christian.

Leaving 'Days Of Our Lives'

Arianne has announced her departure from NBC Soap Opera 'Days Of Our Lives' and this announcement took everyone by surprise. The actress' contract expired in April 2017, and she announced that she had no plans to renew it. As a goodbye to fans and the cast, she released a video of her on the last days of her work on the set.

Reportedly, Arianne planned to leave two years prior after writers failed to create a good plotline for her character and the subsequent firing of Boyfriend Shawn Christian. She also clarified about her decision on her blog stating,

"After 18 years of an incredible run as Nicole Walker on 'Days of our Lives', I will not be returning this contract year. I have had such beautiful support from all of you who have loved to hate Nicole and then love her again. Nicole has been through a life not fully rewarded by some of your standards, but I have also been able to connect with you on personal levels. Although nothing is ever permanent and I never like to say never, it is bye for now. I will see you all in other places as other characters and I am excited for my journey. I leave you for now with the Dreams (Blue Angels) video to inspire YOUR dreams. Thank you Van Halen and Sammy for helping me fulfill my dreams."

Her decision to exit the show left the fans in the state of bemusement as her character's role was beginning to gain momentum as its fort runner. On the series' 21st anniversary, the mother of one took to Instagram to share her disbelief. She was eight years of age when she made her first appearance on the show.

After leaving Days Of Our Lives, Arianne went to star on numerous TV films including Mommy Be Mine and Webcam Girls.