By LRU Writer | On: August 10, 2018
American actress Aijona Alexus won the hearts of many with her terrific performance on 13 Reasons Why alongside other cast members, Christian Navarro, Dylan Minnette, Alisha Boe, Ajiona Alexus. And early fame at a young age has made Aijona more humble and down-to-earth. However, before Aijona started writing success in her acting resume, she reflects the success of her family, with whom she shares a passionate relationship. American actress Aijona Alexus won the hearts of many with her terrific performance on 13 Reasons Why alongside other cast members, Christian Navarro, Dylan Minnette, Alisha Boe, Ajiona Alexus.

And early fame at a young age has made Aijona more humble and down-to-earth.

However, before Aijona started writing success in her acting resume, she reflects the success of her family, with whom she shares a passionate relationship.

Let's take a detour surrounding the personal life of Aijona along with her bio-related details.

Aijona, who possesses an African-American ethnicity, belongs to a family of musicians and singers. In spite of having a busy schedule, she is close to her family and likes to share their details on social media.

Later, on 2 June 2016, she mentioned in a tweet that her parents' had treated her like a princess. Further, Aijona also sent a message to her future boyfriend through the post that she would be expecting no less from a man.

Moreover, Aijona also shares a lovely sibling bond with her brother. On 15 December 2017, she posted a tweet in which she wished her brother, Dee Brown, for his 19th birthday and also proclaimed herself as the "World's Greatest Sister."

Aijona hasn't mentioned much about her mother except on one occasion. On 14 May 2018, she shared an old family photo in which a baby Aijona could be seen with her father, mother, and brother. She further claimed that she got her beautiful eyes from her mother. 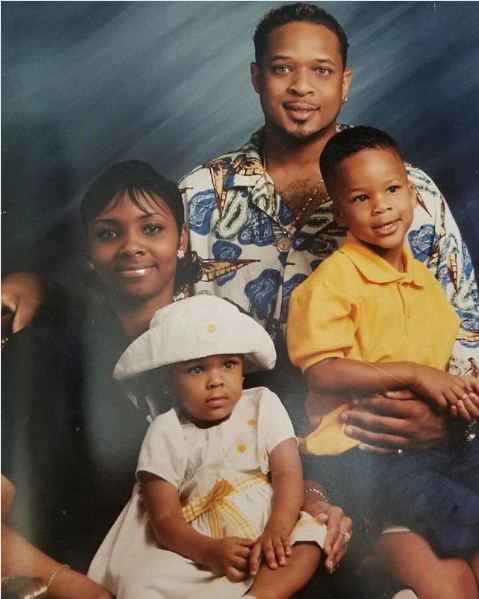 A baby Aijona poses with her mother, father, and brother in a family picture (Photo: Aijona Alexus' Instagram)

In the past, Aijona had also mentioned about her god-parents.

She wrote in a tweet posted on 16 March 2014 that she received the cutest cake from god-parents for her birthday. Besides having a loving family, Aijona has been leading a committed relationship.

While many assumed her dating life to be absent, the 22-year-old actress was going on dates on rare occasions. Talking to JustJaredJr in June 2018, she admitted that she had gone on a date with a guy who rented a movie theatre so that Aijona could enjoy a film with no disturbance.

“Don’t really go on dates…But this sweetheart rented out the movie theater and took me to see one of my favorite cartoon movies, The Incredibles.”

However, she didn't mention the identity of her secret boyfriend or if they were still together. Later, in August 2018 she hinted towards dating musician Hobbz after she shared a picture of the two which was earlier posted by Hobbz calling Aijona as his girl. But the dating rumors soon turned false when Aijona revealed via an Instagram post on 9 August 2018 that their relationship was not real. In the meanwhile, Aijona is still single and appears to be in search of her Prince Charming.

Born in Tuskegee, Alabama; Aijona moved to Birmingham at the age of three in 1999.

Aijona developed a passion for acting at an early age. At the age of 8, she delivered her first monologue on stage. While studying in the seventh grade, she got admitted to the Theatre Department of Alabama School of Fine Arts.

At 14, Aijona earned her first lead role in a feature film Unspoken Words.

She got her breakthrough in 2012, playing the role of De'Anna on The Rickey Smiley Show. She went on to perform in the show till 2014. After her departure from the show, Aijona did a couple of minor roles in television series including Code Black, Grey's Anatomy, and Empire.

Later, she received wide acclaimed after performing the character of Sheri in the Netflix original series 13 Reasons Why. Along with a swiftly rising acting career, Aijona is also an established single. She released her debut single Dream Big in 2013.

Recently in 2018, she released the lyric video of her latest song Baggage.