Alex Brooker, On His Disability: Married in 2014, Happy Father of Baby Boy

By LRU Writer | On: April 07, 2019
It is an unhidden fact that both men and women tend to marry when they are at their best; age, financial status, mental/ physical state and everything else. However, some less fortunate people can't wait for their 100 percent. We are talking about the physically challenged people, who were born with a disability or acquired it after birth.

It is an unhidden fact that both men and women tend to marry when they are at their best; age, financial status, mental/physical state and everything else. However, some less fortunate people can't wait for their 100 percent.

The same is true of the physically challenged people, who were born with a disability or acquired it after birth. But, it doesn't mean that they will not find love or get married, as our celebrity here has defied all the odds.

Alex got famously married in the November of 2014 to his partner and now wife; Lynsey Brooker.

The pair posted several pictures on their Facebook after the wedding, which took place amongst friends and family. 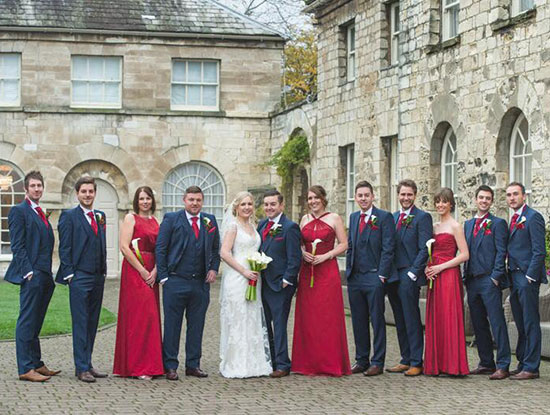 Alex Brooker and Lynsey Brooker during their wedding circa 2014 (Source: JustBridesmaids.com)

In 2013, one year before sharing vows in a beautiful wedding ceremony, Alex's wife Lynsey had appeared on a documentary, which focused on the male body image. In the stated doc, she professed her love to him despite his "disability."

There had also been some Tweets from his fans, who were almost surprised to know that he was married.

Baby In 2017 Followed By Cheating Scandal

Three years after tying the knot, Alex and his wife, Lynsey welcomed their first bundle of joy in 2017. The married duo named their baby daughter, Daphne.

But, then came the news of the TV personality cheating on his other half Lynsey, who's an accountant by profession. Per reports, Alex cheated on his wife with beautician Claire Killock.

Between June to August 2018, he and his alleged mistress were in a romantic relationship, before the latter ended things prematurely. A source close to the Last Leg host attributed the long distance nature of Alex and Lynsey's marriage behind the affair.

Seven months after the initial surfacing of the ex-marital affair, British tabloids reported that the estranged married duo was working on their marriage. If the reports are accurate, Alex and Lynsey might not have to go through a divorce after all.

Alex Brooker On His Disability

Most people with disability may often exhibit shyness, hesitancy, and low confidence when they have to encounter with nondisabled people.

Also, a nondisabled person may feel slightly uncomfortable dealing with the disabled ones. However, Alex Brooker of England is not someone who'd sit at home in front of the TV all day and watch others live life; just because he is not perfect. He is bold, funny and smart. He is the 10th most famous disabled person in the U.K. 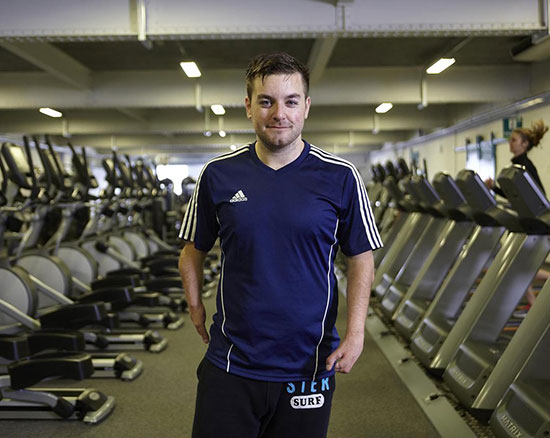 Alex Brooker during one of his workouts in the gym, 2014 (Source: digitalspy.com)

Alex was born with abnormal arms and no bone in his right leg. He now wears a prosthetic leg. In an interview covered by standard.co.uk in 2016, he said:-

“When I was born my fingers on each hand were fused together and I didn’t have the opposable thumb [on my left hand]. Operations at GOSH have given that to me."

Although he often got teased, he took the jokes on himself at first and then made the jokes out of himself. This attribute made him emerge to the T.V in 2012. He is now famously known as the host of Channel 4's The Last Leg; which is a comedy as well as a talk show. He began hosting the show since the 2012 Summer Paralympics.

Alex enjoyed fame after he participated in the "Half a Million Quid" Talent Search in 2012 organized by Channel 4. Intending to find talented physically challenged persons, it covered the 2012 Summer Paralympic Games.

Alex hit the spot, and after interviewing some famous people including David Cameroon, the prime minister, he became famous. Having worked for several charities and organizations to benefit the differently abled ones, he and his team currently opened a new clinic named Prosthetic and Orthotic Midlands Clinic, in Bertby.

He also hosts the show The Superhuman Show for Channel 4 daytime.

Why Is Alex Zanardi His Hero?

In a surprising episode of the comedy show 'The Last Leg,' Alex went on to deliver a monologue that is considered his most passionate speech. The host went on to explain why he felt Alex Zanardi, Italian former professional racing driver, and para-cyclist, was his idol while tearing up.

The para-cyclist received a gold medal in the Paralympic games, 15 years after an accident that took away his legs. Alex then nostalgically talked about how much this meant to him and about how Zanardi was prideful about his condition rather than remorse about it.

"I've been disabled all my life, and I've complained about it when I wanted. I come on here celebrating my disability, and I'm confident, but I'll never entirely be completely okay with it."

"Non-disabled people at home will watch the Paralympic games and be inspired by it – but as a disabled man, he inspires me. I've overcome a lot of issues over the years, and as I come into later life, I've got new ones to come - I worry about how I'll hold my child and things like that. But to see somebody like that talk the way he does, to me it means the world and makes me proud to be disabled. That epitomizes the Paralympic games."

It's easy to see why Alex Zanardi is his hero.

Alex Brooker was born on May 15, 1984 (age 34 years old) in England, United Kingdom. Brooker attended the Norton Knatchbull School and later enrolled at the Liverpool John Moores University and graduated in 2006 which then led him to work as a sports reporter for the Liverpool Echo.

Alex joined the Channel 4’s The Last Leg as a co-host from January of 2013. He has also hosted a one-off documentary on Channel 4 titled Alex Brooker: My Perfect Body.

He is also equally involved in charity for the betterment of disabled people. He is currently working at the Press Association.