By LRU Writer | On: November 14, 2019
Known for his food and wine expert role in the critically exclaimed Netflix show... Queer Eye, the actor stars alongside the likes of Jonathan Van Ness, Tan France, Karamo Brown and Bobby Berk. In the show, which is known for transforming men including gay too... 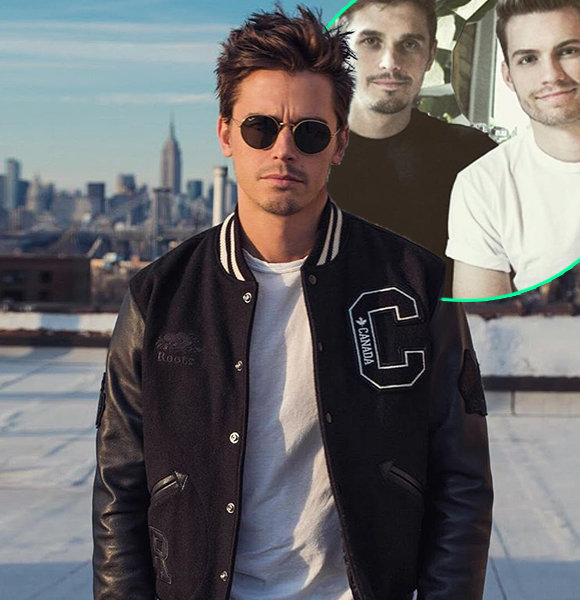 The Fab Five is the new sensation in the town, and Canadian actor Antoni Porowski is one among them.

Known for his food and wine expert role in the critically exclaimed Netflix show, Queer Eye, the actor stars alongside the likes of Jonathan Van Ness, Tan France, Karamo Brown, and Bobby Berk.

In the show, which is known for transforming gay and straight men alike, Antoni holds the chef section and has a unique taste in everything. Among five, Antoni is also the one who does not like to label his sexuality as gay but some other terms.

And his romantic taste has also been revealed as he has been dating his longtime partner.

Among the Queer Eye stars, Antoni Porowski is the one, who likes to prefer his sexuality as fluid sexuality, pansexual. The food expert refuses to term himself as gay. Antoni Porowski (center) along with cast members of Queer Eye in 2018 (Photo: Huffingtonpost.com)

The star further added that he never had a specific label or definition for himself. Speaking on the May’s edition of Gay Times magazine the star added:

"Some people want to define themselves and they should as it is part of their identity. For me personally, I’ve never really had a label for myself."

By sexual fluidity, the star meant that it was not just about being a bisexual as it limited his choice range from man and woman. His rebellious nature said that he never wanted to be labeled with a specific term but be known as Antoni. Further, adding to the same, the food expert addressed calling him a gay would be disrespect for the women he fell in love with.

Though his preferred choice of dating partners is boys, Antoni dated more women than men before opening up about his sexual preferences. So, he thinks it would not be right to the women he shares such much memory with getting erased easily with the label of gay.

"The term bisexual means [he] can only like girls and guys” and I don’t want to deny potentially liking “something else” in the future. Maybe it’s just my rebellious nature. I’m me, I’m Antoni, and I’m all these things.”

The star further opened up about his sexuality and accepted that at that moment, he was gay because he was in a romantic relationship with a guy.

But, coming out as a gay has also been challenging for the wine curator. In an interview, he said as he was in his first relationship with a guy, he felt very stressed out about his body. While dating women, he did not feel the same as they possessed different physical attributes, but while being around men, the physical aspect made him insecure.

Also, adding to the same Antoni recalled being very harsh on his body. Similarly, the food expert is mainly focused on his diet plan and conscious about how he looks around his partner.

Well, sorry news for Antoni's fans, the star, who stands at the height of 6 feet(1.83 meters), is in a romantic relationship with a gay partner and is happy with his husband like figure.

The star was living a blissful dating life with his partner, Joey Krietemeyer.

The loved-up duo lived together in a posh apartment at Brooklyn NewYork and regularly updated about their relationship on Instagram, be it at night out in a lavish restaurant in the big apple, or lazily spending on the weekend at home.

And on the occasion of Valentine's Day 2018, the celebrity chef also arranged a lovely platter filled with goodies and presented it to his boyfriend.

Previously on 9 February 2018, Joey had posted the cute looking duo’s picture and described it as his honor to be walking beside his husband like figure.

The couple was also friends with American actress of Indian origin Reema Sampat, and Antoni on his Instagram on 3 July 2017 shared a photo of the trio, Joey, Reema, and himself and labeled family.

You May Also Like: Jonathan Van Ness Only Man Without Boyfriend Or Husband In Queer Eye!

Unfortunately, things took a turn for the worst when the news leaked out that the loving pair broke up on 27 October 2018. According to the report, Antoni and Joey had already separated at the start of 2018 but kept their relationship status to themselves.

The reason they did not open up about the matter earlier might have been the fear of ruining the opening of Antoni's new restaurant in New York City. Further, they also claimed to part ways on good terms and still share the friendly bond that was always there between the two.

Surprisingly, it did not take Antoni much time to recover from the break up as he started dating the Flipping Out Alum Trace Lehnhoff in October 2018. However, their relationship did not last much as they called it quits in August 2019.

Despite a second relationship crash, Antoni was at his humorous best. He and his Queer co-star Jonathan Van Ness spread fake news of the two dating each other. John frequently shared pictures of himself with the chef on his Instagram, which made everyone believe the rumors were true.

But, in reality, he was single and more focused on his work than ever. On 9 September 2019, he released a new cookbook named Antoni in the Kitchen and marked his return in the cooking scene in a fabulous style.

Along with commitment towards his work, Antoni seemed to be paving a way towards maintaining a healthy love life as well. This became apparent with his appearance at model Heidi Klum's Halloween party in October 2019.

It turned out that he didn't come all by himself in the party as he had Kevin Harrington to give him company. The TV icon and his rumored boyfriend, who is involved in brand planning, were both dressed up in their Halloween costume of zombie employees of the former movie rental giant Blockbuster. He shared the picture of their night out at the event through his Insta handle, and interestingly, they seem to share a common interest after all. In the caption, he wrote

While many were quick to address that as solely the motto of the Blockbuster back in those days, it's also the reference to the 2008 movie Be Kind Rewind. So, it's very probable that the two share some same taste for films as well.

As a result, with a mutual decision on their custom and frequent appearances together, fans and tabloids speculated that the two were seeing each other. However, none of them confirmed their relationship, nor did they deny it either.

To Have 'Pride-Themed Brunch'

As Montreal's Pride Weeks began, Antoni Porowski, alongside the Canadian prime minister Justin Trudeau had a "Pride-Themed Brunch." While the Pride Weeks goes from 9 August to 19 August, the Liberal party took it to announced their collaboration.

The announcement also revealed a chance to win a trip to join them. They sent one lucky winner to a special brunch reception alongside Antoni and Justin. Adding to it, they threw a dinner along with regular swag to make sure to be prepared for the parade.