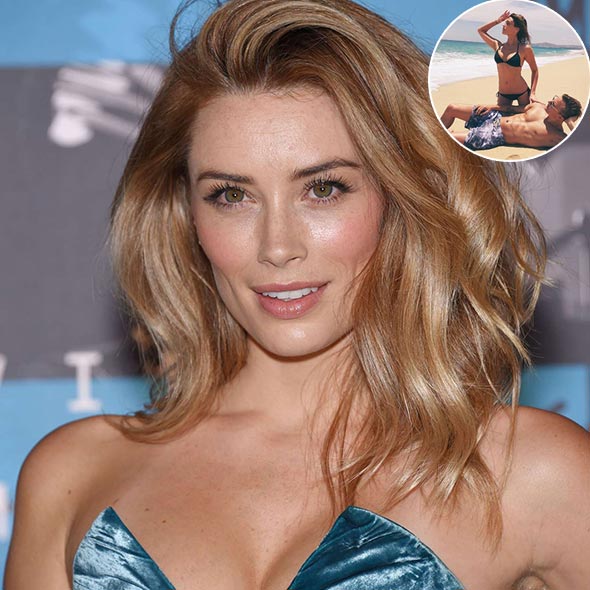 Enjoying a weekend with the beloved is something everybody loves. Likewise, the life of Arielle Vandenberg is also quite interesting, sharing some beautiful moments with her sweetheart boyfriend.

Let's get into the details about this lovely couple,

Who Is Arielle Vandenberg's Boyfriend?

An American actress, Arielle Vandenberg, and her boyfriend, Matt Cutshall, are enjoying each other's company for a few years. From spending a weekend on the beach through her Instagram posts.

The couple had been good friends for a long time now. They have together featured in many Vine videos and interviews, which gives us the idea of as long as a lifetime.

While the couple's relationship became more and more evident over time, the two accepted each other and eventually started flaunting their relationship on social media. And many agree that the couple looks great together.

Arielle is taken, and she looks perfect with her boyfriend, Matt. While the couple has not disclosed how long they've been dating, they've made sure that people realize that they're fully in love.

As the couple is so perfect together, there have been ongoing questions about the next step. The next step being an engagement, Let's Get Into It.

While Arielle only mentioned Matt Cutshall as her “best friend in the universe" back in 2014. Three years later, love bloomed between the two vine stars.

As of 2019, only happy moments have arrived for the duo, who have been dating since 2017. The pair got engaged to each other in September 2019. Both the vine stars shared the news on their respective Instagram handle.

Her boyfriend turned fiance shared the moment of the proposal with a lovely caption stating,

"It's been quite the journey with you my sweetheart and I wouldn't have it any other way. You are perfect for me and I can't wait to spend forever with you. I LOVE YOU my best friend, my cutie, my almost wife,"

Her boyfriend was not shy to propose to her, revealing a beautiful round-shaped diamond engagement ring. In her Instagram post, Matt and Arielle were seen together, with one hand around her boyfriend, who was kissing her cheek. Only a few minutes into their announcement and their well-wishers and followers flooded them with messages and comments of congratulation. Including many celebrities like Ruby Rose, Sarah Hyland, Nina Dobrev, and more other friends of the couple also commented on their happy moment.

Adding to the happiness, the couple has now officially been engaged for five years, which Vandenberg shared on 11th May, 2022, through her Instagram, stating,

"Cheers to 5 years! God blessed the broken road that led me straight to you. NOT me quoting Rascal Flatts. But seriously - you are my best friend @mattcutshall you are the love of my life and that’s that! I love you to the stars and back then back to the stars then back. Anja’s forever!"

While the news is official that the two have been engaged for five years, Arielle nor her fiance have said anything about the wedding.

Arielle has dated a series of men in the past. Some of them are listed below:-

Arielle and Will Arnett, a Canadian actor, were dating from December 2014 to May 2015. Will Arnett was previously married to Amy Poehler and Penelope Ann Miller but now has been divorced from both of them. Arielle Vandenberg and ex-boyfriend Will Arnett made their red carpet debut at a party for the 2015 Golden Globes (source: wennermedia.com) Arielle and Shaun White, American Snowboarder, dated for about five months. The relationship started in early 2011 and ended in June 2011. Shaun White, however, has been dating Sarah Barthel since 2013 Arielle and Adam Levine, an American singer, dated for about one month. The relationship that started in December 2009 ended shortly in January 2010. Adam is the singer of the popular band Maroon 5. In 2019 he married his wife, Behati Prinsloo. Arielle and Adam Levine in the streets (source: famousfix.com) Born on September 27, 1986, Arielle was raised in Fallbrook, California. Arielle studied tap, ballet, and jazz dancing from the age of five, which later led her way to community theater.

Her net worth is not disclosed yet.