American rapper Da Brat has never opened up about her sexual orientation but has been found dating both males and females. Is she straight by sexuality? Lesbian? What about her partner? Let’s find it out.

According to afterellen.com, in an interview in the year 2011, De Brat revealed that she likes to keep her sexuality private. She said:- 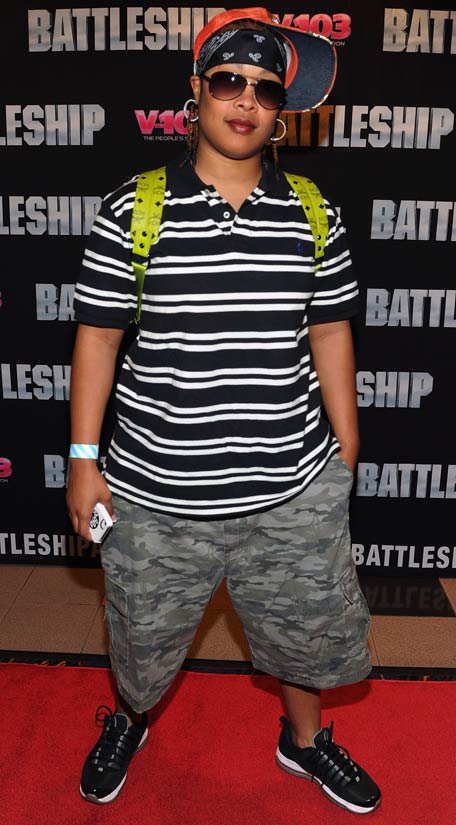 Da Brat dresses up like a guy who has created many speculations regarding her sexuality (Source: theboombox.com)

She also got questioned about her attire. The way she dresses up has created many thoughts regarding her sexuality. They asked her the reason behind dressing up like a guy. Da Brat answered them as:-

“When I dress tomboyish, I don’t really consider it dressing like a guy. I am a full fledge woman and I like to dress however I feel comfortable. So when I feel like getting glam-med up, and throwing on the Christian Louboutins, and the weave, or whatever I’m going to do to my hair, and push up my t****** in a push-up bra, throw on my La Perla, then that’s what it is and I’m comfortable either way. But when I’m performing or just, on the day to day, or in the streets, I’ll probably have my braids with my hat cocked to the back.”

Like it or not, Da Brat has a point. Because someone wears clothes a certain way doesn't mean it defines his/her sexual orientation.

Though Da Brat hasn’t uttered a single word regarding her sexuality, many people have hypothesized her as gay due to her actions and attire.

Similar:- Queen Latifah Former Girlfriend Pregnant; Has Anything To Do With It?

In September 2015, she was seen partying with her new girlfriend in Tao, a nightclub in Las Vegas. Celebrities like Black Chyna, Wilmer Valderrama, Amber Rose, Nick Cannon, and James Harden were also present in the club.

According to sandrarose.com, gay rapper Da Brat was sitting in the VIP corner with her girlfriend. Loyal reader Hilary, perhaps a reporter to Sandra Rose, wrote:-

“So Dat Brat was out & about in Vegas with her undercover lover. Brat was rockin great make up, we all had a great time & Brat made sure that she was in the VIP’s VERY back corner so she and her girl could get reallllllly intimate. The joke of the night was “y’all get a room!” because of their…. How should I say… Goings on.”

To this day, the identity of Da Brat's alleged girlfriend isn't known to the public. All things point towards the affair being short-lived.

Before making girlfriends, Da Brat used to have boyfriends. She was not only linked up but also rumored to be dating many male celebrities from the town. In Jan 2006, Da Brat was found dating American television personality David Gest.

Ten years after getting linked with the legendary rapper, in April 2016, David - who gained popularity for being the husband of Liza Minnelli - passed away at Four Seasons hotel in London, United Kingdom. Reports suggested that he was abusing sleeping pills and consuming body enhancement drugs to treat his pneumonia, which could have contributed to the death.

Rapper In Our Vault:- Who Is FatBoy SSE? Wiki Reveals Girlfriend, Net Worth & Essential Facts

Though never publically acknowledging their dating history, the pair's romance possessed all the intensity, or so the gossip sites claim. To this day, Da Brat has yet to speak on her rumored boyfriend's untimely death.

According to whosdatedwho.com, she has been in a relationship with other guys, namely Andre Benjamin and Allen Iverson.

Speaking of boyfriends, Da Brat was rumored to have dated reality star Kirk Frost for money. According to the gossip site Sandra Rose, the latter paid more than $2,000 for dating him.

Besides boys, she was also seen with many women, viz. Keisha Spivey, Missy Elliott, Karrine Steffans, and Traci Bingham. All in all, the Chicago native's versatile charisma on the microphone is also reflected in her dating preference, in that she has mastered all that there is when it comes to sweeping her love interests off their feet.

An American rapper from Chicago, Illinois, Da Brat was born on April 14, 1974. She was raised in two different households with her siblings as her parents were never married. Actress LisaRaye McCoy is her younger half-sister.

Her parents' not getting married was by no means the worst tragedy the McCoy siblings faced; learning about her father's brutal murder in 1988 was the worst thing that ever happened to them.

Da Brat's father, David Ray McCoy, a renowned businessman in Chicago, was murdered by his then-girlfriend Sheila Daniels with her brother's assistance over a financial rift. Sheila and her brother, Tyrone, are currently serving their 80 years and 60-year sentence.

During her sophomore and junior year, she attended Kenwood Academy. She also went to a Baptist church where she sang in the choir. She is a graduate of the Academy of Scholastic Achievement.

Da Brat is the first female rapper to go platinum which has received two Grammy Award nominations. Her debut album Funkdafied (1994) was an immense success. She has also participated in the fifth season of the VH1 reality series Celebrity Fit Club in 2006.

Since July 2015, she has been working as a co-host for the Rickey Smiley Morning Show. Brat’s net worth is estimated to be $3 million.

Despite her impressive net worth & regular stream of income from her music, she currently finds herself in a difficult financial time. Fearing the possibility of seeing a jail sentence, the 44-year-old rapper filed for bankruptcy in August of 2018 after losing a $6 million lawsuit against her assault victim Shyla Stevens.

At the filing of her bankruptcy, she cited her debt to be around $7 million. Unlike Brat, her sister seems to be flourishing both on personal as well as career fronts. Lisa - who has a reported net worth of $10 million - got engaged in 2018.