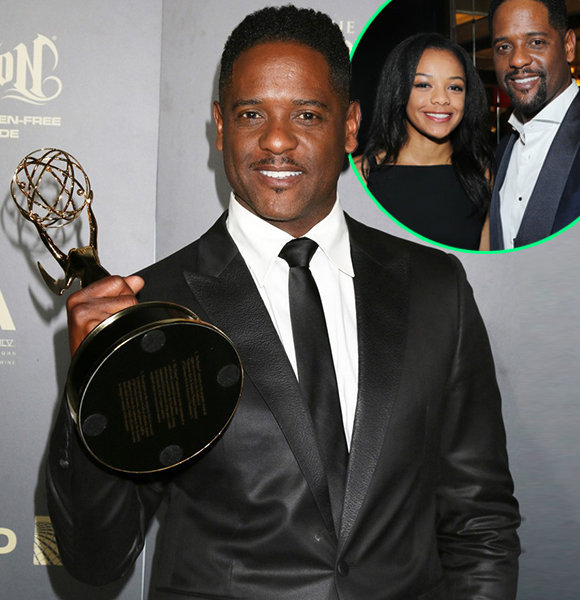 African-American actor Blair Underwood knows all when it comes to justifying the character to the fullest.

He portrayed the role of the abusive husband in Madea's Family Reunion, making it real to such an extent that many cannot help but speculate the actor is abusive in real life.

There's no question that Blair is a great actor in himself, and in his 50s, he may not be abusive but is a family man. Blair is a very dedicated husband and a father who has taken his married life for more than two decades.

Blair's love for his wife is still fresh and new as that of a newly married couple.

While Blair has been ruling the audiences' hearts from his big-screen roles, his wife has also contributed her inputs from behind-the-camera works. His wife was Eddie Murphy's assistant for three years, from 1989 to 1992.

Later, the movie buff couple exchanged the wedding vows in front of 350 guests, held at a plush private estate 50 miles south of Los Angeles on September 17, 17, 1994.

The day, the L. A Law actor Blair turned his fiancee Desiree DaCosta his wife, was attended by the likes of stars including Will Smith, Angela Bassett, Kim Fields, and Malcolm-Jamal Warner.

The couple first met four years before their marriage at a Hollywood Party, which was an "instant love connection," as per Desiree. Blair later popped the question on 1993's New Year's Day under the Eiffel Tower.

After three years of marriage, Blair and his wife welcomed their first child, a son named Paris, in 1997. Shortly after that, the pair were again blessed with their first daughter, Brielle, in 1999 and a son named Blake in 2001.

Blair has been sharing quality time with his children and wife with a family of five aside from his busy schedule. Blair was spotted spending family time in Mexico with his family. Blair made his family love more evident when he had to leave his family for the NBC series Ironside in 2013. Instead, the actor convinced the production to film the series Ironside's pilot episodes in Los Angeles instead of New York. He stated:

"I been married for 19 years and have three children [...] And family is the most important thing especially at this time in life. After six months in New York doing stage, I really didn’t want to be away from my family that long, and NBC was nice enough to shoot the series here, which is great."

Well, finding a marriage that's survived over a two-decade is rare to see, and it is truly a hump of wedded bliss. And Heat Wave star regards his wife, Desiree as the most incredible mother to their three kids. And he is eternally grateful that she has embraced God's assignment to their family.

It's not only his relationship that can amaze, but his parents' relationship is something that is very difficult to find.

Born to an Army colonel father and an interior designer mother, Blair learned many things from his parents' good and smooth relationship. And the longevity of his parents' relationship seemed to have served as an extra point for his married life.

You may like: Alexandra Barreto and Her Husband's Picture-Perfect Story

Blair, who has an older brother and two younger sisters, regards his parents as heroes in love, and they have taught him what a relationship can be-enduring and powerful. His parents have been married for the last 62 years. In April 2014, he shared the great moment and congratulated his parents on their 54th year of marriage via Facebook. He quoted them as his "role models" and "example extraordinaire."

So, with his rising career in the entertainment industry, Blair Underwood has a very supportive family who has helped him reach the height of his career.

Blair Erwin Underwood was born on August 25, 1964, in  Tacoma, Washington.

He made his screen debut in the 1985 musical Krush Groove and played attorney Jonathan Rollins in the NBC legal drama series L.A. Law from 1987 to 1994.

Underwood portrays U.S. President Elias Martinez in the NBC drama series The Event from 2010 until 2011.

Underwood made her Broadway debut in the Roundabout Theatre Company's Broadway revival of Charles Fuller's Pulitzer Prize-winning drama A Soldier's Play in January 2020.

Apart from his acting career, Blair is involved with several charitable organizations. He received the 1993 Humanitarian Award for his efforts with the Muscular Dystrophy Association's Los Angeles chapter. In addition, he was the spokesperson for YouthAIDS in 2003, alongside Ashley Judd.

He also spoke at Obama campaign events and endorsed President Barack Obama's candidacy. While Obama was president of the Harvard Law Review, Blair met Obama while studying for his L.A. Law role at Harvard Law School.

Stay tuned to get more updates on Blair Underwood.