By LRU Writer | On: September 12, 2019
Brandon Thomas Lee is the breakout star of the 2019 reality show...everyone couldn't help but wonder if the two were, dating...boasts a net worth of... in August 2019, the model was spotted hanging out with actress. 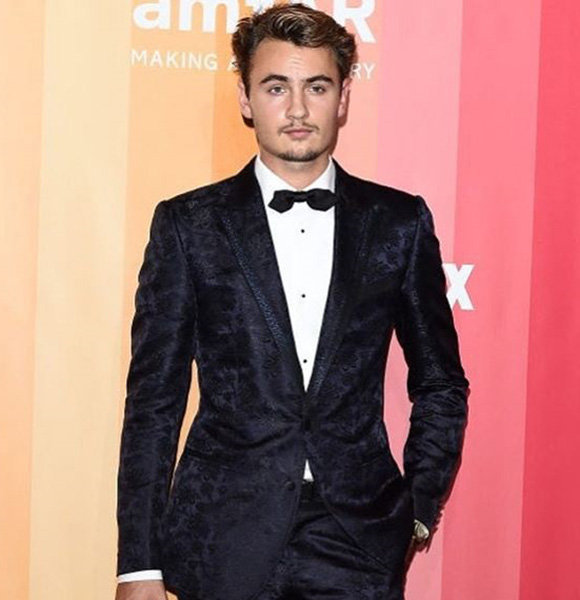 Brandon Thomas Lee is the buzzing star of the 2019 reality show, The Hills: New Beginning. Besides the TV show, he has acted on Netflix movie Sierra Burgess Is a Loser and BET show, Tales.

Also, he worked for brands, namely Tommy Hilfiger and Dolce & Gabbana as a model.

Brandon used to date Bella Thorne in 2015. However, the young couple’s love fizzled out, and the reality star parted ways with his girlfriend. Interestingly, the ex-couple played on-screen lovers in 2019 series Tales.

Despite their romantic past, the pair remained professionals and worked amicably.

Since his failed romance with Bella, Brandon remained coy about his dating life. However, he was photographed with a mystery brunette while coming out of an LA club in 2018. Brandon Thomas Lee walks with a mystery girl on 15th May 2018 (Photo: www.dailymail.co.uk)

But, the reality star didn’t comment on the nature of their relationship.

Instead, while talking to Entertainment Tonight on a promotional tour of his 2019 show The Hills: New Beginning, he confirmed his single relationship status.

However, in August 2019, the model was spotted hanging out with actress Kathryn Newton, which promoted the rumors that he was dating again. On 14th August that year, Brandon and his rumored partner were spotted spending time with his family members.

His mother Pamela Anderson and brother Dylan Jagger Lee joined the two for dinner at Giorgio Baldi restaurant in Santa Monica. As a result, everyone couldn't help but wonder if the duo dating.

There was also a probability that his girlfriend was in good terms with his family, although it could turn out to be Brandon's move to introduce his newfound love to his parents. The next day, he was even seen together with her leaving a venue. His girlfriend Kathryn is an upcoming actress known for playing significant roles in films like Pokémon: Detective Pikachu and Blockers.

Brandon was born to famous parents - Tommy Lee and Pamela Anderson - on 6 June 1996. Besides his parents, the 23-year-old star has a brother named Dylan Lee, who is an aspiring singer and an Instagram star.

The Lee Boys’ parents divorced just a year after Dylan was born in 1998. Their separation was anything but peaceful. Brandon’s mother filed a domestic battery charge against his drummer father. The case resulted in Tommy going to jail for six months in 1998.

Further, Brandon of height 5 feet 9 inches (1.8 m) was also involved in a late-night altercation with his father in March 2018. His father took to Twitter to reveal about the fight and even posted a picture of a swollen face, an alleged result of the reality star’s punch.

Despite the ups and downs, the father-son duo are set to appear together in The Hills: New Beginning in 2019.

Although Brandon was born to famous parents, he was kept hidden from the limelight. His Playboy model mother made sure that the reality star and his brother had a private childhood.

Ironically, Brandon developed an interest in acting when he went to a boarding school in Vancouver Island in British Columbia for five years. Returning to LA, he began partying every night like a typical socialite.

But, he didn’t want the party life for himself and decided to become sober in 2019.

Today, the reality star is looking to enter into Hollywood via The Hills: New Beginning. He is already on his way with acting credits in Inherent Greed, and Sierra Burgess Is a Loser.