By LRU Writer | On: March 03, 2021
Cara Delevingne is one of the most famous models in the world. She has worked with world-renowned brands namely...Cara was born on 12 August 1992 in London, England. The 27-year-old’s parents are Charles Delevingne and Pandora...After multiple outings later, Cara and Ashley confirmed their romance via a public kiss at Heathrow Airport in London on August... 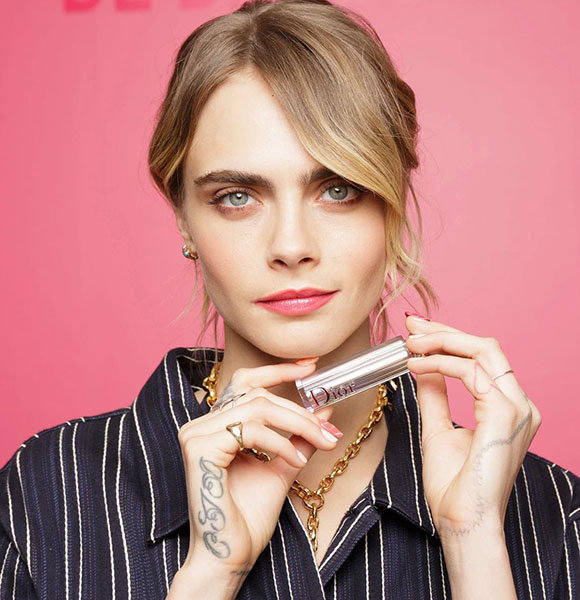 Cara Delevingne is one of the most famous models in the world. She has worked with world-renowned brands, namely Chanel, Stella McCartney, Oscar de la Renta, Burberry, and Moschino.

Along with a flourishing modeling career, she forayed into the acting world with the role of Princess Sorokina in 2012 film, Anna Karenina.

In 2019, her TV show titled Carnival Row came out. Also, Cara’s movie Life in a Year has completed filming as of September 2019.

Cara is open about her gay sexuality. She has spoken and made statements about her sexual preference multiple times. In such an instance, Cara talked at length about her affinity towards women in a Vogue cover issue in 2017.

However, at the same time, the actress maintained that she still liked men, revealing her bisexual identity.

The supermodel got linked to multiple celebrities, namely Rita Ora, Harry Styles, Jake Bugg, and Michelle Rodriguez from 2011 to 2014.

However, it was her relationship with American singer St. Vincent, which grabbed significant headlines in December 2014. The lesbian partners were also rumored to be engaged in July 2016.

The engagement rumors had disseminated between Cara and St. Vincent as the model was spotted with a ring that resembled an engagement ring.

But, there was no truth to the engaged rumors, and the pair eventually parted ways in September 2016.

Post the demise of their relationship, Cara reportedly moved on with Paris Jackson in 2017. Sadly, the alleged romance fizzled out the next year.

However, the model-actress didn’t give up on love. In May 2018, her dating relationship with Ashley Benson came out. However, the pair took their sweet time to confirm their relationship.

Multiple outings later, Cara and Ashley confirmed their romance via a public kiss at Heathrow Airport, London in August 2018. Further, in June 2019, the model shared a video of the couple kissing each other on the occasion of pride month.

Keeping their romance alive, Cara and her girlfriend reportedly got married in August 2019 at Las-Vegas. However, the ceremony turned out to be a friendship ceremony. Further, the actor duo also didn't obtain a marriage license.

Interestingly, Poppy is also a famous model like her younger sister. Cara of height 5 feet 8 inches (1.73 m) and weight 51 kgs had learned the ropes of modeling from her supermodel sister.

A little tidbit, Poppy was discovered as a teenager by Storm Model Management, and Cara followed the path of her older sister.