By LRU Writer | On: April 09, 2019
The American TV host, Cathy Kelley is a regular on WWE, but not on the ring...Signed to the wrestling franchise in 2016, Cathy has become a household name interviewing wrestlers and making announcements...A native of Illinois, her professional life is an open book; but what about her family and dating relationships? 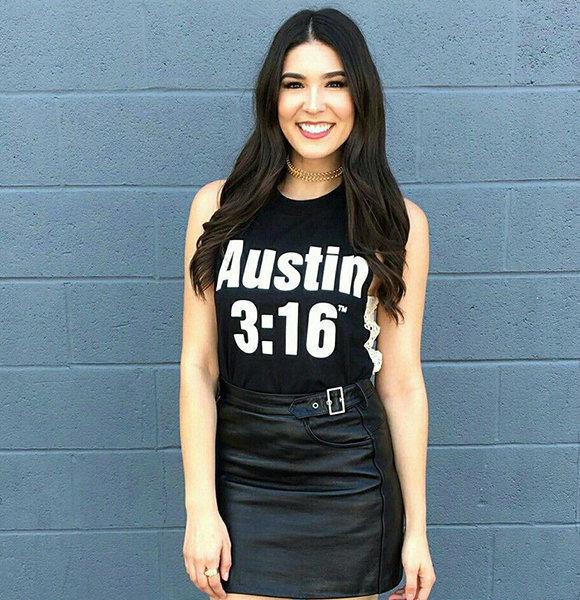 The American TV host, Cathy Kelley is a regular on WWE, but not on the ring. Signed to the wrestling franchise in 2016, Cathy is a household name for interviewing wrestlers and making announcements.

A native of Illinois, her professional life is an open book; but what about her family and dating relationships? Let's find out!

Parents Details With Net Worth

WWE aftershow host, Cathy was born in Oak Park, Illinois. Her parents separated when she was still a child, after which her custody was granted to her mother. Despite growing up in the care of her single mother, Liz Kovacs, Cathy spent a significant time of her childhood at her father's farm located in Vermont.

Cathy - age 30 - was always supported by her parents in making her career decisions, in spite of their differences. Cathy's father has remained low-key to date; whereas, her mother is often spotted in public with her daughter.

Cathy enjoys a successful career as a host on WWE. She earlier rose to fame hosting the recap episodes of WWE Monday Night Raw and NXT. She had also served as the digital correspondent at the Wrestlemania 32 in 2016.

While working at WWE, Cathy has accumulated significant net worth, which amounts to a few million.

The beautiful lady may be a host for the WWE after shows, but she possesses the right attitude and body physique to become a wrestler.

With a moderate height of five feet six inches or 1.68 meters, Cathy has maintained an attractive posture measuring 32-26-34. Further, she has balanced a suitable weight, weighing nearly 132 pounds (60 kgs).

If she can build on a few muscles, Cathy could be perfect at the ring instead of interviewing the WWE stars.

Cathy was in a relationship with professional wrestler Finn Balor, who is also known by his stage name Prince Devitt.

The couple was first linked in April 2017 when they attended the WWE Hall Of Fame event together. While dating, neither Cathy nor Finn commented on their romance. However, they were often spotted hanging out and were also pictured together on numerous occasions. Cathy Kelley and boyfriend Finn Balor hang out with the WWE crew members in 2017 (Photo: Tumblr.com)

The relationship was later confirmed by Sean Waltman, who mentioned that they were indeed dating.

Cathy's affair with her boyfriend came as a shock to many of Finn's fans. They wanted the WWE star to date fellow wrestler, Bayley. However, as Bayley is engaged to another professional wrestler named Aaron Solow, the chances of Finn dating her was slim.

However, Finn's romance with Cathy also didn't last long as they reportedly split up sometime in 2018. With Cathy is now free from her emotional chains, she can entirely focus on her career.