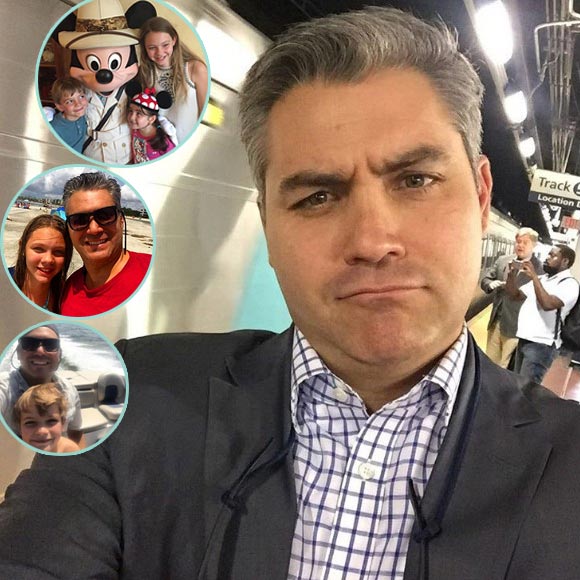 The CNN Anchor & Chief Domestic Correspondent, Jim Acosta, doesn’t miss a chance to spend a pleasant time with his children.

From taking his kids on vacation to family dinner, let's get to know about the anchor's married life with his then-wife.

Jim Acosta and his ex-wife, Sharon Mobley Stow, share three lovely children together. Among the three children, two are daughters and one son. But sadly, the proud father has not mentioned the name of his sweethearts anywhere, keeping them away from the media's limelight. Going by Jim’s Instagram, he is very close to the children as he frequently takes his children to different locations. Adding to the happiness bundle, the star anchor added an adorable fur baby to the family whom he loves to share about on his social media.

The relation of Jim is ecstatic with the children. On the other hand, fans - for years - remained unaware of his relationship with his now-ex-wife, Sharon Stow. However, in a rare 2015 interview, he alluded to his married life by revealing,

"There are lots of sacrifices you have to make, but so far I think we've been able to maintain a healthy balance and enjoy it along the way."

The world had the opportunity to meet Jim's ex-spouse Sharon following the divorce between the two.

Another Sudden Halt To Married Life:- Will Arnett Dating Again, Who Is Girlfriend After Divorce? Kids, Age, Height

Subsequent reports following the divorce announcement revealed that the former couple had been married for more than 24 years and went to college together. Jim and Sharon met as students at the James Madison University in Virginia. The college sweethearts then tied the knot in 1994, just one year after graduating. Around 2008, they purchased a $660 thousand mansion in Maryland.

Since living single, the CNN personnel reportedly got photographed with numerous women. Now back in the dating pool, we cannot wait to meet the anchor's future girlfriend.

He completed his graduation from James Madison University along with a Mass Communication degree and a minor degree in Political Science. He first embraced a career in radio with WMAL in Washington D.C.

Jim has worked in other media like WTTG TV, WBIR TV, KTVT-TV, and WBBM TV. In May 2016, Donald Trump derisively called Jim “Real Beauty” on the nationally televised show. As of recently, Jim appeared at the National Press Club along with Sam Donaldson and Brian Karem, where they talked about their days at the WH and more with ABC News.

For all his endeavors in the world of broadcasting, the veteran journo boasts a reported net worth of $4 million. Meanwhile, he bags $700 thousand per year in salary.

Witnessing his rising career, we cannot wait to update you guys more on him!