By LRU Writer | On: September 19, 2019
Cokie Roberts married to journalist...had been married for more than...have two children...had an advantage of having the same job as they would drive home...she departed from the world due to complications bought by...and several notables personalities rushed in to pour their condolences and tribute... 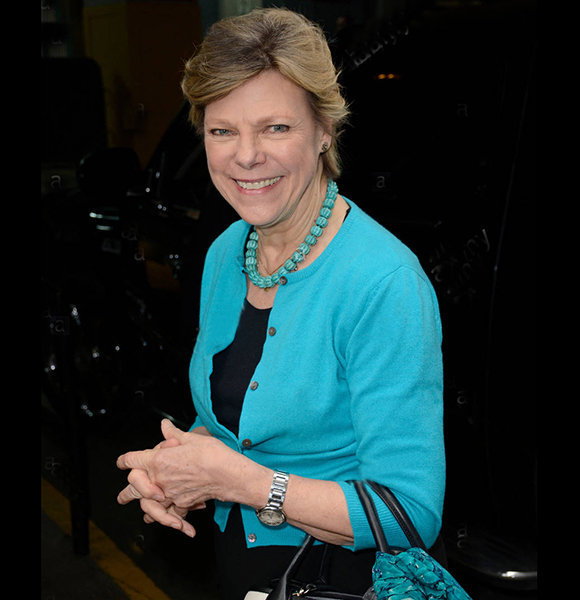 A couple spent more than a half-century together, and their story - like a fairy tale of the 21st century - is worth reading.

The Emmy Award-winning broadcast journalist, Cokie Roberts shares the long and joyful journey with the veteran journalist husband. The couple never got the time to appreciate each other. Still, they have a happy family.

With their growing age, the couple were more into each other and also claimed that they couldn't imagine losing the sight of each other. So, anyone can imagine the situation of Cokie's husband when she broke the news of her cancer in

Cokie got married to the veteran Jewish journalist Steve Roberts on 10 September 1966 in the Cokie's family garden in Bethesda, Md., where the couple went on to settle together.

“We had a Jewish Catholic marriage and had to overcome some hurdles,” Mrs. Roberts said. “So we married in my backyard instead of in a house of worship.”

More than 1500 guest attended the wedding ceremony, and her mother cooked the food for the entire guests all by her self. A couple of half-centuries shared the first glances at the National Student Association in 1962 organized at Ohio State University.

It was Cokie who approached Steven to greet him at first and started dating since then. After many hurdles and communication gap, he proposed to her after she warned him that he was moving to California. As he did not want to lose her, he immediately came with the marriage proposal.

“I said if we didn’t get married I was moving to California. So he proposed. He didn’t want to lose me.

Fifty-one years later, they’ve never lost sight of each other.

Cokie shared two children with her husband; a daughter named Rebecca and a son named Lee. Cokie and Steve Roberts at their 1966 wedding in Bethesda, Maryland (Photo: Steve, and Cokie Roberts)

Both the children of the veteran journalist took the different path of the career from their mother, Rebecca studied Politics at Princeton college and then produced political radio ads in Philadelphia. Afterward, she ended up being the host of a daily talk show, The Intersection.

Cokie's son, Lee Harriss Roberts was an associate in the London office of Morgan Stanley & Company, the investment bank. In 2014, Lee accepted the position of Budget Director at N.C after Art Pope stepped down.

Cokie relished a net worth of $5 million and cherished the old life with her grandchildren as her 48-year-old daughter shared three boys with her banker -husband Dan Hartman.

With the marriage that lasted more than 50 years, the couple revealed to the New York Times in December 2017 that the key to their long marriage is to try to change together. After getting married, she never thought she would have a successful career but also with her quickly adaptation habit; she got the profession for the best.

Also, she revealed that she had two jobs and also was raising her children at the same time.

Likewise, the couple had the advantage of having the same job as they would drive home together and get rid of that whole conversation in the car that married people have.

Cokie, who was appointed by President George W. Bush to his Council on Service and Civic Participation, had a fierce battle with cancer back in 2002. This Week anchor confirmed to the Washington Post about her Breast cancer.

The doctor found a lump in her breast in June 2002 and revealed that it was the small tumor in her left breast. Immediately, she went under the successful lumpectomy at Sibley Hospital in Washington, D.C. Even though she was fighting the illness, she continued her work at ABC News.

With her right treatment at the right time, she was battling against her disease. But sadly, she couldn't keep up the fight for too long. On 17th September 2019, she departed from the world due to complications bought by her cancer. Cokie was 75 years old when she died.

The news of her death came as a shock to many, and several notables personalities rushed in to pour their condolences and tribute for her.

Expressing his condolences, Former President of US Barak Obama wrote,

"Cokie Roberts was a role model to young women at a time when the profession was still dominated by men; a constant over forty years of a shifting media landscape and changing world."

Likewise, Lesley Stahl - CBS reporter and former co-worker of Cokie - shared a video tribute through her Twitter handle. In the clip, she shared about her decades of experience while working with the journalist and Cokie's contributions as a robust inspiring figure in journalism.

Although the majority of the world knew her as Cokie Roberts, she was born as 'Mary Martha Corinne Morrison Claiborne Boggs.' Cokie was an American by nationality - she was born in the city of New Orleans, USA in 1943. The journalist celebrated her birthday on the 27th of December every year.

Cokie came from the family of father Hale Boggs and mother Lindy Boggs.

Both her parents worked in the government and were prominent U.S. Representatives. Her mother died of natural causes in Chevy Chase, Maryland on the 27th of July 2013. Two years later, Cokie lost her father in the Malaysia Airlines Flight 370 crash.

Regarding her political stand, Cokie like her parents' sided with the Democratic Party.

In August 2019, Cokie, along with her husband, Steven shared their opinion on the Trump presidency. On JoplinGlobe.com, the pair mentioned that the country needed a leader that lifts spirits, ease pain and calm fears in times of trouble - and that Donald Trump was not that kind of leader.

As a result, Trump shockingly tweeted a very demeaning tweet post her death criticizing Cokie instead of expressing his condolences. His selfish act evidently received a lot of backlashes online with some even calling the President a narcissist.