By LRU Writer | On: August 02, 2019
Courtney Hadwin is...Entering the stage of...has won the hearts of many... net worth and income for the star...is a native of...shook the stage of her...has charmed her audiences with...reports of dating a boyfriend... 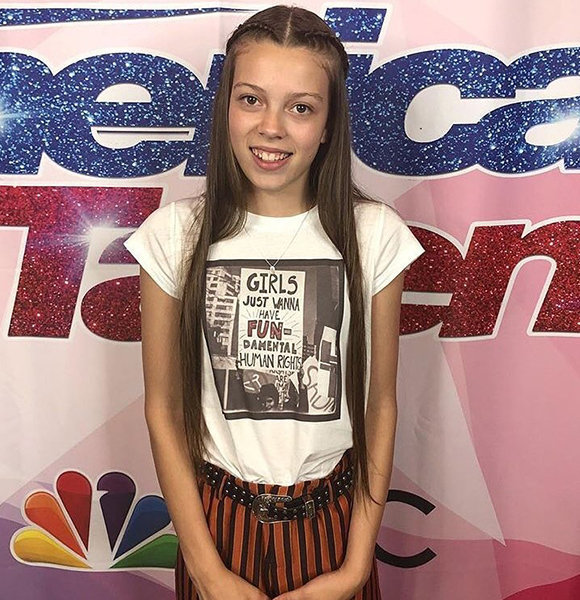 Courtney Hadwin is the Howey Mandel's golden buzzer winner in the 2018 America's Got Talent. Although the little lady didn't win the competition itself, she won the heart of millions around the world.

Entering the stage of  AGT, her shy and nervous persona feared the judges a little. However, soon as the music started, her version of the Black Crowes Hard to Handle changed the perspective of everyone listening.

The vocalist has won the hearts of many including X-Factor finalist Stacey Solomon and AGT judge Simon Cowell. Although she found acclaim in The Voice Kids UK as a finalist in 2017, only after her appearance on AGT, her fame and career skyrocketed.

Finishing 6th overall, Courtney later got the opportunity to sign a contract with Arista Record and Simon's Syco Music in 2018. While a fixed net worth and income for the star has not yet surfaced, her relative earnings after the label signings are estimated to be around a six-digit figure.

The superstar singer is a native of Hartlepool, England.

Born on 6 June 2004, Courtney is the 15-year-old daughter of father Paul Hadwin and mother Annmarie Hadwin. The eldest offspring of her parents, she has two younger siblings, little brother Paul and little sister Melissa. Interestingly, the 5 feet 3 inched (1.6m) lady's talent for singing was recognized long ago. At just the age of 10, Courtney shook the stage of her school Shotton Hall with her blistering version of the classic Say Something by Big World.

A new sensation in the world of music, the shy and introvert singer, has charmed her audiences with her songs.

Sadly, she has also been a victim of bullying because of it. While some are supportive of Courtney's style of music, including her parents and many friends, a select few are jealous, they call her names and a boy.

However, the name-calling has not interfered with the hopes and dreams of the rising star.

She is still going strong, performing in the roads of England since 2016. Busking the streets to pay for a vocal coach and singing lessons, her style of singing has been appreciated by vendors, shopkeepers and passers alike.

Till now, there have been no reports of her dating a boyfriend. While her Instagram account is filled with posts of her family, work, and many other moments, a picture of anyone, who can be associated as her boyfriend does not exist.

Signing new deals and singing her heart out, it appears, Courtney has no free time specified for a romantic relationship in 2019.