Demetria Obilor Age 27 Married Status, Who Is Her Husband? Find Out Here

By LRU Writer | On: December 06, 2018
American actress, Demetria Obilor has always remained low-key when it comes to talking about her personal life......The main reason behind it could merely be her desire not to let her private life overshadow her professional accomplishments......Demetria Obilor is an emerging journalist working as a traffic anchor at ABC affiliate WFAA-TV in Dallas, Texas......With an emerging career, Demetria remains married to......Tackling through online body shamers, Demetria...... 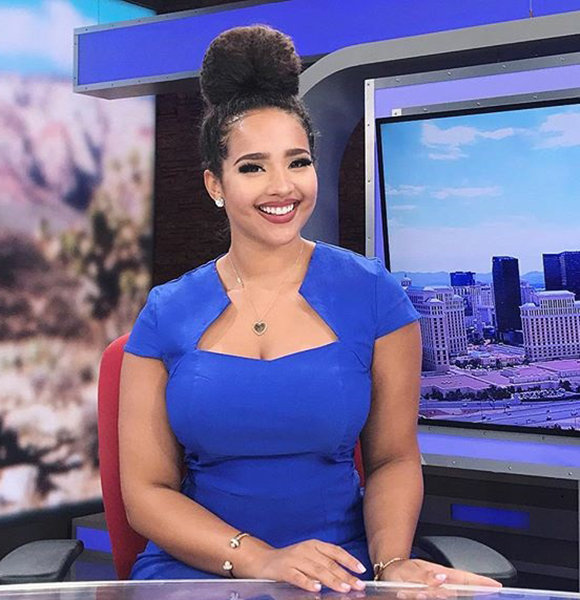 An emerging American journalist determined to make a name for herself, Demetria Obilor is quickly climbing the ladder of success.

Gradually developing her identity through sheer work determinations, she slowly caught the public attention in her career journey. It has thus led to increased curiosity about her personal life among viewers.

Demetria, a traffic anchor who is committed to her job of reporting road updates, hasn't updated a lot of information about her personal life. Maintaining a low-key private life, she has thus managed to focus her entire attention towards work.

So, is she engaged or already married to a husband? Or, is there still a chance for her admirers to try their luck?

Relationship Status At Age 27: Single, Engaged, Or Married To Husband?

Similar to several other emerging TV personalities, Demetria prefers to keep her personal life under the wraps. The main reason behind it could merely be her desire not to let her private life overshadow her professional accomplishments.

However, in these days and age of social media, Demetria’s tweets on several occasions more or less has given her viewers a general idea regarding her relationship status.

Several of Demetria’s tweets have clearly identified her as a single lady, who has no one to put a ring on her. She also provided facts through her tweets about how single girls generally behave.

“If a single girl tells you she has a boyfriend, she's not interested. Facts.”

Demetria went one step further to highlight just how single she is through one of her tweets where she referred the cartoon character Evil Morty from Rick & Morty as her boyfriend.

“Evil Morty is my boyfriend.”

With the former Las Vegas traffic reporter clearly mentioning her relationship status to be single through her tweets, millions of her viewers around the world would be excited knowing they still have a chance with this beautiful lady.

However, it seems Demetria is in no mood to get a husband anytime soon and remains married to her work.

With her mother coming from a Polish-German background, and father a Nigerian, Demetria identifies herself as a mixed ethnicity woman of African-American heritage. Identifying her birthdate as 29 March 1991; the actress, aged 27, grew up alongside her three brothers.

She remains extremely close to her brothers till date, one of whom is an aspiring bodybuilder.

Get To Know: Who Is Alysha Del Valle, NBC4 Journalist Married To & What's Her Salary? Beginning her journalism career post her graduation from the University of Kansas, Demetria has been on TV for almost five years now.

Starting her career in her hometown, Kansas City, as the Morning Traffic Reporter for NBC affiliated KSHB-TV, Demetria has jumped leaps and bounds in her career to land her current job as a Traffic Ensemble Anchor at ABC affiliate WFAA-TV in Dallas, Texas.

Another Intersting Read: PIX 11 Marissa Torres's Age Doesn't Look Like A Married Woman With A Family; Looks Can Be Illusion

After experiencing some significant ups and downs in her relatively short career, her life's major highlight came after she received massive appreciation for the way she tackled online body shaming directed towards her.

After an online post labeled her as a “ 16/18 woman in size six dress,” Demetria came up with a fabulous response to shut down her critics in an interview given to NBC News.

“I'm not a 16/18, but even if I was, for you to try to call out my size like that to hurt me or discriminate against me, I'm not for that. Black people on TV; there’s nothing wrong with that. Naturally, curly hair — I don't care if a black woman wants to wear her hair straight or in braids, you don't get to say what's professional and what's not professional based on your white standard of beauty.”

Tackling through such obstacles in her career, Demetria has quickly gone on to make a name for herself in her relatively short career span. Such fame earns her a decent fortune as well with her salary figure estimated to be around $83k per annum.