By LRU Writer | On: November 14, 2019
Doja Cat is an upcoming talent in the music industry. After releasing her debut EP Purrr! in August 2014, the American nationality further came under the spotlight with her viral YouTube hit Mooo!...But Doja being her goofy self, let the world know about her boyfriend on the day after Valentines day 2019... 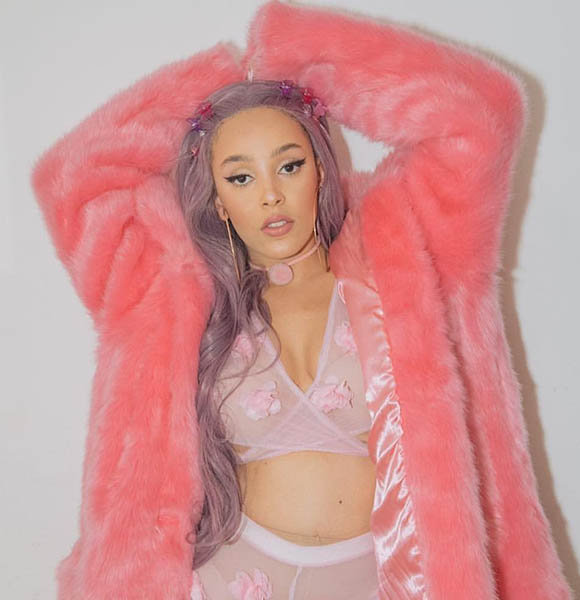 Doja Cat is an uprising talent in the music industry. After releasing her debut EP Purrr! in August 2014, the American nationality further came under the spotlight with her viral YouTube hit Mooo!.

The singer at just 22 years of age is being termed as next Cardi B - a breakout music star of 2018. Keep reading to know about the next big thing in the music industry.

Doja - real name Amalaratna Zandile Dlamini - was making waves in her professional life, but fans want to know about her dating life.

On the day after 2019 Valentine's day, Doja let the world know about her boyfriend. No, she didn’t introduce her actual man but joked about being in love with Sriracha, a hot sauce brand.

It seemed that she was indeed single at that moment. Even if there was someone in her life, it was apparent that she was choosing to keep things private.

One thing that wasn't private was her professional life and the fame that it brought. But new fame can take a toll on anyone, and it can be quite challenging to maintain a personal life under public scrutiny. Doja sure knew a thing or two about being scrutinized.

After she came under the spotlight for her viral hit ‘Mooo!, her past homophobic tweets--she made in 2015- were unearthed by fans. Even Will & Grace star Debra Messing tweeted at Doja for her indecent behavior.

Don't Miss:- The Brandy Bunch’s Susan Olsen Is No More With LA Talk Radio After Her Homophobic Rant; Know More

Similarly, her admirers were left heartbroken due to her ignorance of the LGBT community. Doja did apologize for her homophobic slur, but according to fans, it was tone-deaf.

Nevertheless, she moved on from her Twitter controversy and concentrated on her music. She announced her tour titled Amala would start on 1st March 2019 across Europe and the USA.

Doja is known for giving a collective experience to her fans on her live performances. Dressed up as a cow with elaborate hair extension and eccentric hairstyles in her concerts, she may give her all her fans a ball-esque in her upcoming tour.

Thus, it is a big deal that she is going on her tour. If she keeps her effort towards her music and keeps working, she sure will one day accumulate net worth like her musical inspirations.

In 2019, the singer dating life was no longer a mystery as a big reveal came into the light. Turned out that has been dating indie singer Johnny Utah.

Although it wasn't Doja herself who made the news official, her boyfriend confirmed it with a post on Instagram on 9th September that year. In the picture, she could be seen kissing her partner in the cheek while posing for the mirror selfie. Even though they didn't make cited anything on the caption, it was apparent through the further pictures that they were in a loving relationship.

Moreover, through further pictures, the two could be seen spending time with one another sharing meals. But the two haven't yet made any official statement on their relationship.

However, fans will be seeing more of these two in their future social media posts.

Talking about her new beau Johnny, he is quite an emerging musical artist with more than 40 thousand followers on his YouTube channel alone. Also, he is admired by a wide range of other artists like GirlInRed.

Doja’s creativity can be traced back to her parents. Her father Dumisani Dlamini is a noted South African actor, film producer and her mother Deborah Elizabeth Sawyer is a painter.

Growing up in a creative home Doja of multi-ethnicity sure had a lot of support. But her path to music was not without struggles.

During her high school, Doja, who celebrates her birthday on 21st October, dropped out of class 11 due to her diagnosed ADHD condition. She found it hard to concentrate on various subjects at her school. A struggling kid, Doja added her role as a back dancing troop to her bio.

Overcoming her childhood difficulties, Roll with Us singer became a bonafide artist. She was inspired by Pharrell, Drake, PartyNextDoor and Erykah Badu. On top of that, her body measurements - the height of 5 feet 5 inches(1.6m) and weight of 57 kg(125 pounds) - compliments her artist persona.