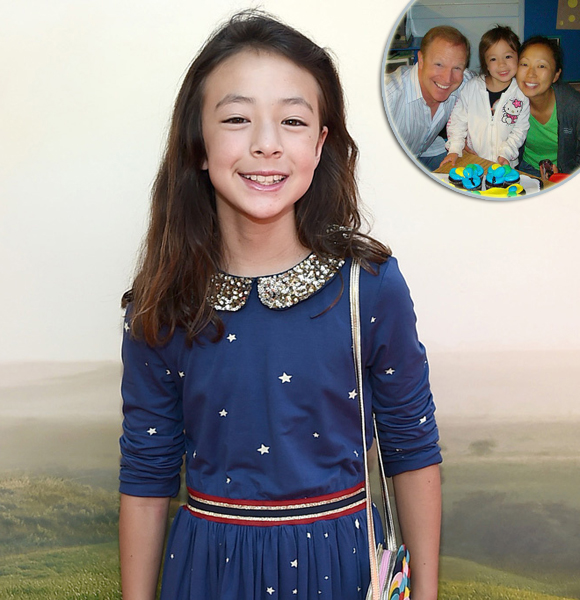 In that case, you are probably familiar with one of the lovely characters Lily Tucker-Pritchett who Aubrey Anderson-Emmons perfectly portrayed.

Aubrey joined the series when she was four years old and has been a main cast member for almost a decade.

The audience was charmed by her performance, but they were still confused about her ethnicity.

Let's clear up some confusion regarding her. Then, keep scrolling to know more about her personal life.

Aubrey Anderson-Emmons was born to a multiracial couple on June 6, 2007, in Santa Monica, California. Her father, Kent Emmons, was of American ethnicity, while her mother, Amy Anderson, was of South Korean ethnicity.

Like the diversity in races, her parents are involved in different professions; Kent is a media entrepreneur, while Amy is a stand-up comedian and actress.

She also has a half-sister named Ashley Emmons, who lives in Missouri. Given that her father is American and her mother is Korean, the ethnicity of the young actress is a bit confusing.

Seeing her parent's origin, we can safely assume that she belongs to the Korean-American ethnicity.

Regardless of her ancestry, she has been able to establish her name in the entertainment industry at a very young age.

Aubrey is best known for her role on Modern Family, and she became a part of the series from its third season, replacing the twins Jaden and Ella Hiller.

She is one of the youngest artists on the set of the TV show, portraying the character of Lily Tucker-Pritchett, who belongs to the Vietnamese ethnicity adopted by an American gay couple: Mitchell Pritchett and Cameron Tucker.

Learn About: Matthew Mercer- The Voice of Many Characters

She is a cute life form, and her co-stars never get washed out pampering her. One of the actors of the same series, Nolan Gould, who plays Luke Dunphy, uttered his experience when he first met Aubrey to Hollywood Reporter in 2011, and his words were:

Aubrey recorded history in 2012 and 2013, for she was the youngest actress to walk the Primetime Emmy Award red carpet.

The adorable actress also made her way on the red carpet of the 2017 Screen Actors Guild Awards on January 29 in Los Angeles.

Her presence was the nomination of Modern Family for Outstanding Performance by an Ensemble Comedy Series, and it was the 18th SAG nomination for the show. Aubrey is too young, yet her concern for her parents' financial situation is admirable. According to Celebrity Net Worth, the little actress earns a huge salary of close to $70,000 per episode, which concludes to a net worth of $6 million.

The girl exhibits impressive acting, assuring us about her glittering acting career. She is now engaged in the YouTube channel that she started in 2015. If we look at her social media, she can be seen traveling a lot.

The busy little princess loves to spend her spare time traveling with her mother. As a result, the mother-daughter combination commonly gets spotted in public places and takes turns sharing their images on their social accounts.

Know More: What Is Betty Gilpin's Net Worth? Age, Height, Dating and More

We got to see their smiling faces on Instagram while they were on a weekend holiday on the occasion of Mother's Day.

In 2016, the cute mom-daughter pair enjoyed their time on a trip to San Francisco, where they hosted a fashion show for the eco-friendly shoe brand Plae. Aubrey with her mom, Amy, in a fashion show in San Francisco. (Photo Credit: mom.me)

As of now, Aubrey has been living her teen life. She has also made a boyfriend, who she flaunts on her Instagram.

Stay tuned to get more updates on Aubrey Anderson-Emmons.