By LRU Writer | On: June 24, 2019
An ever-present face in the British showbiz, Helen McCrory... got engaged her husband Damian Lewis in.. with two children... comes from a family of... biological mother Anne (Morgans) was... 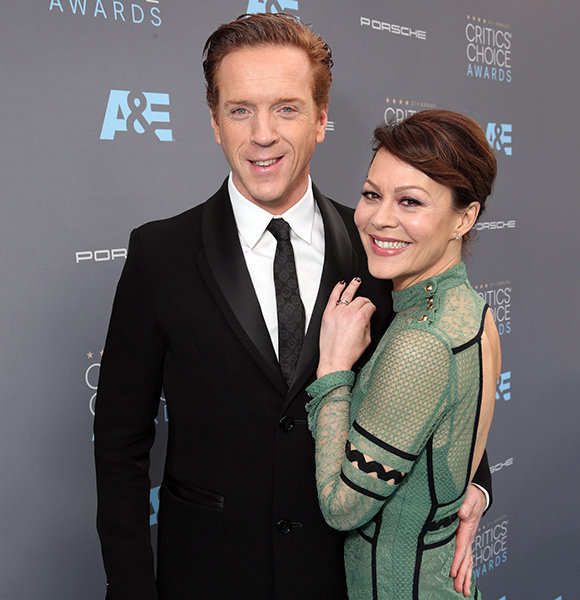 An ever-present face in the British showbiz, Helen McCrory doesn't need an introduction. The gorgeous actress best gets recognized for portraying Narcissa Malfoy in the Harry Potter movies.

In the 2006 flick The Queen, she played Cherie Blair, the wife of Tony Blair. Four years later, she reprised the role in the film The Special Relationship.

With regards to international success, Helen earned Hollywood superstar status by starring in blockbuster projects such as Hugo (2011) and James Bond movie Skyfall (2012).

Helen's career should serve as a blueprint to aspiring actors and actresses. So, should her married life!

The Interview With The Vampire actress got engaged to her husband Damian Lewis in February 2006. A year and four months later, they tied the wedding knots.

Blessed with two children, Helen and Damian welcomed their firstborn, Manon in September 2006. In November the following year, the duo had their second child - also, their first son - named Gulliver. In Helen's eyes, Damian is as lovely as anyone can be. But, she admittedly, isn't jealous of her husband's co-stars as they aren't "gorgeous."

Together with their children, the married duo resides in their North London home. In 2018, they bought their second home in Suffolk.

Damian's $14 million net worth enables the pair to make such savvy investment. Helen, on the other hand, is no slouch either. She reportedly owns $5 million in net worth.

Starring in TV shows "Anna Karenina," "North Square" & "In a Land of Plenty," Helen earned laudable success in the 2000s. It was the BBC gangster drama series Peaky Blinders that helped the talented actress showcase her acting chops.

Born in August 1968, Helen hails from Paddington, London, England. She comes from a family of five. A Glasgow, Scotland-native, her father Iain McCrory was a diplomat. Her biological mother Anne (Morgans) was Welsh.

Talking about siblings, the 50-year-old "Penny Dreadful" actress has two: a sister, Catherine and a brother, John.

Because of her father's occupation, Helen spent her formative years in countries such as Nigeria, Norway, Cameroon, Madagascar, Tanzania, and France. After finishing schooling from Queenswood School, she moved back to Europe. On her return, she enrolled at the Drama Centre in London.