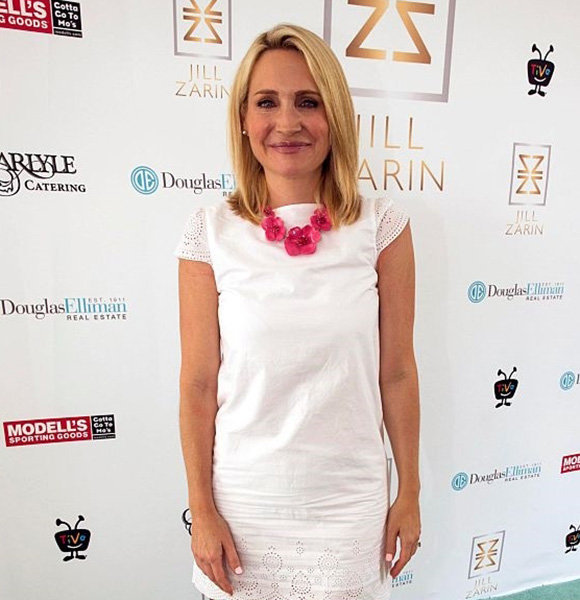 Andrea Canning is a Canadian news reporter best known as the host of Dateline NBC. She started at the show in 2006 and has been a fan favorite ever since. Additionally, she presents another NBC program, TODAY.

Although her career focuses on reporting, Andrea is more than just a journalist. She is also a writer and an actress, praised for her performances in Double Mommy and A Daughter's Revenge.

But, her show hosting job will always be the highlight of her resume as it brought her fame and a considerable net worth for Andrea.

Even with her busy schedule, she has maintained a balance between her professional and personal life. She has been living a happy life with her husband and children.

Keep scrolling to find out more about her personal life.

Nothing less than a knight in shining armor would suffice for Andrea, considering her beauty and personality. Well, it just turned out that her knight was not in a white horse but a F/A-18 Fighter jet. Her husband, Tony Bancroft, was a U.S. Marine Corps Fighter Pilot back when the couple got married. Her husband now works as a research analyst for GAMCO Investors, Inc.

Andrea met her husband on the Thanksgiving weekend of 2006 in Annapolis, Maryland. The pair soon connected, and her husband, Tony, proposed the same year on the beach at Cuttyhunk Island, Massachusetts.

After dating for two years, the couple got married on 7 June 2008 at the All Saints' Anglican Church of Collingwood.

With over a decade of married life, the lovebirds are lucky enough to be parents to six children. Andrea and Tony are parents to five beautiful daughters. 13-year-old Anna is the oldest and is followed by Charlie, age 11, Kiki, age9, Georgia, age7, and Elle, age 6. However, being a mother to five amazing daughters was not enough for Andrea. Earlier in 2019, she announced that she was pregnant again, and this time it was a boy. The news correspondent took to the stage of the TODAY show to reveal the good news to the public. The couple welcomed their son in 2019.

The baby was named after her husband's father - whose real name is George Anthony Bancroft II.

Andrea is happily living with her husband and children. However, this has not stopped her career.

Andrea Canning was born on 10 December 1972 in Collingwood, Ontario, Canada.

She attended the University of Western Ontario and graduated with a Bachelor's degree in Psychology for her education.

Even after giving birth to six children, she has managed to keep her figure in check regarding her physique. Andrea maintains an active lifestyle, and she was also linked with weight loss programs in the past.

Having to present herself in front of the screen for a million, Andrea is very conscious of her appearance. She has an average height of 5 feet 6 inches (1.67m) along with a weight of 62 Kg.

Her previous jobs included reporting and co-anchoring the evening newscast for WCPO-TV in Cincinnati. In addition, Canning worked for WPTV-TV in West Palm Beach, Florida, from 1999 to 2001 and CKVR-TV in Barrie, Ontario, from 1997 to 1999 as a reporter and anchor.

She was also the morning anchor for Greenville, Mississippi's WXVT-CBS. Prior to joining CKVR, Canning worked as an assignment editor for the tabloid TV show Extra from 1996 to 1997. In addition, she worked as an intern for Baywatch and shared a residence with future media celebrity and host Ryan Seacrest while living in Los Angeles.

Canning began working for NBC News in October 2012 as a Dateline journalist while also contributing to other NBC News platforms.

Beginning in 2019, Canning was portrayed as a news anchor in the popular series of Ruby Herring Mystery films.

Stay tuned to get more updates on Andrea Canning.