By LRU Writer | On: March 05, 2019
Jamie Anne Allman is a bonafide actress, known for her role Terry Maerk in hit murder mystery series The Killing...Kansas native of age.. is married to Prison Break star Marshall Allman...Marshall's birthday is on 5th April whereas his wife’s birthday is on... 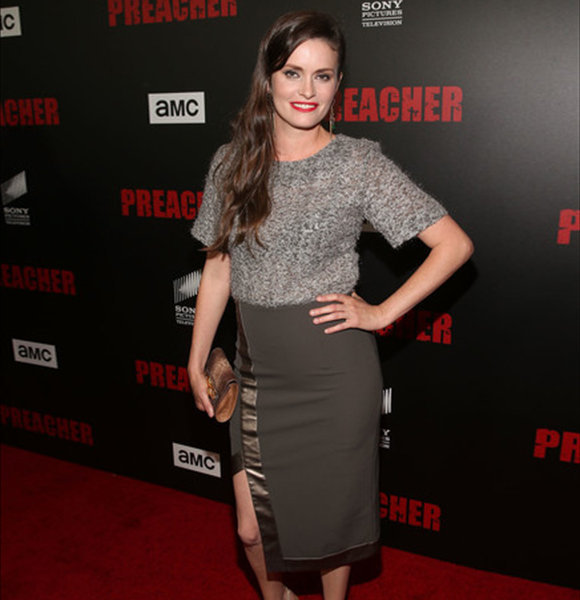 Jamie Anne Allman is a bonafide actress, known for her role of Terry Maerk in the hit murder mystery series, The Killing. She is married to American actor, Marshall Allman. She also has kids with her husband.

A TV star and a family woman, Jamie balances both roles with grace!

Her Age, Birthday And Family

Jamie was born in Parsons, Kansas. Firstborn among five children, the acting bug hit her at an early age. To chase her dreams, she moved to Los Angeles from her hometown.

One of her first roles was a recurring part in Fox series The Shield. Subsequently, she got her first role in a feature film The Notebook alongside Ryan Gosling and Rachel Mcadams.

Kansas native of age 41 kept getting work in top television series like Six Feet Under, Saving Grace, The Closer, and Monk. But it was her role in AMC murder mystery The Killing that gained her full recognition from the audience.

While her professional bliss is budding her personal life is also similar. She shares three children - twins sons and a younger daughter- with her husband, Marshall Allman. However, she had to deal with a lot of complications during her pregnancy. At the time of her first pregnancy, she tested positive of gestational diabetes and had to spend months in bed rest.

Further complicating her term, she had a short cervix, and due to a bladder infection, her twins had to be delivered 81 days before their due date. She gave birth to her sons - Asher and Oliver - on 31st January 2013 but had to keep them at the hospital till April.

Now, all her children lead a healthy life in spite of complications during their birth. The tough pregnancy brought her more close to her True Blood actor husband, Marshall. He used to take great care of her during her pregnancies and help her through everything. Marshall calls her the star of his life and believes there were destined to be together due to their somewhat same birthday. Marshall's birthday is on 5th April whereas his wife’s birthday is on 6th April.

Measurements And Net Worth

With maintained measurements, Jamie stands at a height of 5 feet 6 ¾ inches (1.69 m). Born to parents Mike Brown and Penny Haven, she grew up in a farm.

Jamie attended elementary school in Chetopa, Kansas and graduated from Labette County High School in Altamont, Kansas. She attended Labette Community College for a while before moving to California. To brush up her acting, she took acting classes in Playhouse West in Los Angeles.

As her average salary as an actress is $50,529 per year, it can be estimated that her net worth is quite decent.