By LRU Writer | On: February 27, 2019
Canadian actor Jared Kesso is an award-winning actor who rocked the silver screen as Ben Chartier in the Canadian drama series, 19-2. Undoubtedly, one of the most beautiful men in Canada has ruled more than the award world; the hearts of many female fans becoming a heartthrob of all. His sharp jawline and voice alone, are enough to captivate the female fans. 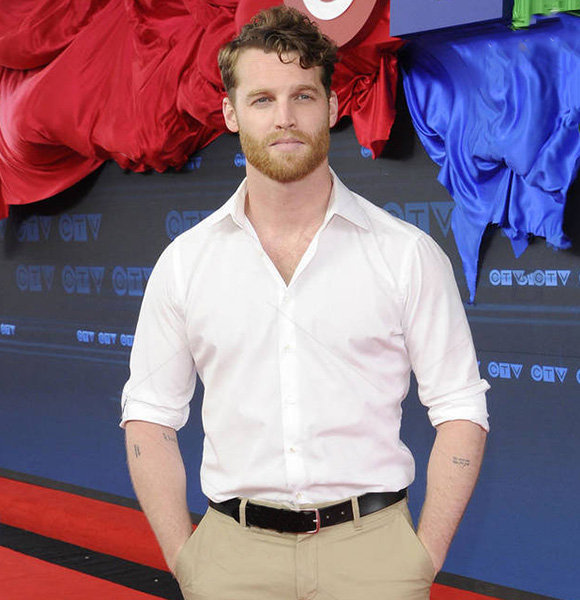 Canadian actor Jared Kesso is an award-winning actor, who rocked the silver screen as Ben Chartier in the Canadian drama series, 19-2.

With good looks and acting talents, Jared has become a heartthrob of many female fans. His sharp jawline and voice alone, are enough to captivate the female fans.

However, the million-dollar question strikes whether the actor is carrying "still single" tag or has a girlfriend in real?

The following preface answers all. Why don't you keep on reading till the end!

Jared Kesso, with his alluring height and charming looks, is irresistible to many lady fans, who could not help themselves but swoon all over him. But the handsome hunk seems to decorate his dating life with his special lady.

As heartbreaking it sounds for many, Jared's social media also has talked about his girlfriend. Jared happened to make a trip with his friends back in December 2012 and tweeted about the trip. While replying to the tweet by Brett Catto, he mentioned his girlfriend would be driving Jared and his friends.

Jared's girlfriend became his driver in August 2016 too!

While Jared was in-between juggling shows, he used to write scripts on the laptop, while his girlfriend drove both Jared and his dog to New Brunswick and Prince Edward Island. But Jared's confession of having a girlfriend came later in May 2017 during an interview with the HELLO. Pointing out his style in uniform, he got asked about his preference for keeping a beard.

Jared responded that mom and grandma will be disappointed on keeping the beard whereas cutting the beard will do the same to his girlfriend. Well, he diplomatically stated,

"I don’t like to disappoint the women in my life"

Despite all, Jared has successfully maintained his girlfriend's identity a secret. He has also made sure that his social media does not leak his girlfriend's name and whereabouts. Perhaps, Jared prefers privacy and wants to keep his girlfriend out of the limelight as his silence on his love life poses the same.

Beard has been an issue for Jared from before!

He revealed that his mother made him cut his beard off while replying to Gayle Frank's tweet on 5 February 2014.

But his mother is not all that got features on his social media. In a tweet video shared on 17th September 2015, he documented his father, J.H Kesso speaking on their family sawmill in their hometown of Listowel, Ontario. His father has been handling the family business since 1872.

Again, in an interview with cbc.ca on January 2017, Jared mentioned that his parents still live in Listowel looking after the family business. He stated,

"My parents still live there, business is still there, I go back quite a bit, and as much as it's a lot like my life growing up in Listowel, it's not directly based on Listowel."

Jared also remarked that he visits his parents in his hometown, Listowel whenever he gets a chance. Similarly, he has two siblings, i.e., one sister named Abigail and a brother named Alan Keeso.

His sister talked about being a nurse at Sick Kids Hospital in Toronto back in 2013. He tweeted in 2013 about the passion of his sister who wanted to be a nurse at that time. Also, he wished his sister and her husband Christopher Hopkins on the 2017's New Year via tweet.

And his brother, Alan is in the Canadian army. He expressed how he was proud of his brother being promoted to the Lieutenant of the Canadian Armed Forces via tweet back in November 2013.

Since he chose the different profession from his siblings, he had earned the best actor award at the Canadian Screen Awards in Toronto on 1st March 2015.

Given his success in both small and big screens, one would find it hard to believe that there was a time in Jared's life when acting was his second option. A hockey enthusiast since his childhood, the Godzilla star had aspirations to become a professional hockey player, before he shifted his focus on performative arts.

Besides Godzilla - which grossed over half a billion against the budget of $160 million - Jared has starred in two television movies about Don Cherry.

And with the popularity of Letterkenny, his reputation as an actor with range is likely to see new heights. The small-town southern Ontario roots inspired-sitcom is all set to clinch all the major honors at the 2019 Canadian Screen Awards.

The comedy series is the byproduct of a collaborative effort between Jared and his partner Mike Broden, who set up a YouTube channel in 2013. Titled Play Fun Games Pictures, the platform laid out the initial blueprint to what would eventually become Letterkenny.