By LRU Writer | On: November 15, 2019
Jenni Farley has completed a full circle with a new boyfriend who attended her wedding ceremony with ex-husband...was even stabbed by Jenni in a drunk condition and cheated on him with...has officially confirmed thier relation via Instagram, posting lovely pictures of the two on a...decided to have a breast implant before the shooting of... 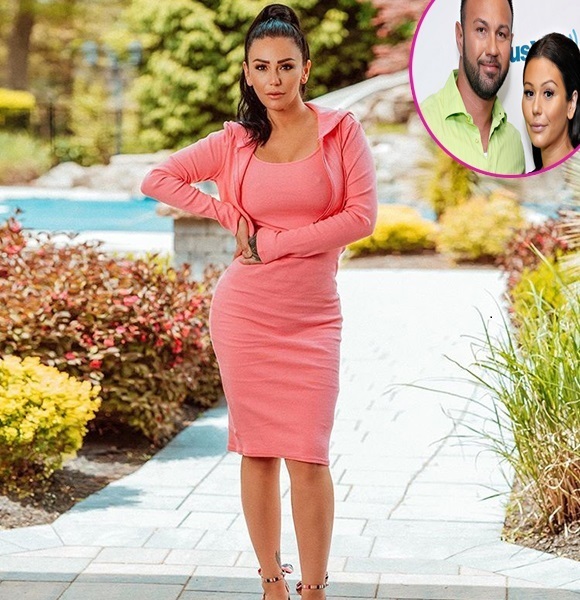 Jenni Farley completed a full circle with her new boyfriend, who was once an attendee at her wedding with ex-husband Roger Mathews in 2015.

While she was long-time friends with Zack Clayton Carpinello, they didn't date in the past as Jenni was a married woman. However, once her husband Roger was out of the picture, there was no one to stop the adorable duo from dating.

Jenni Farley has had a hot and cold outing when it comes to her relationships.

The reality show actress dated Tom Lippolis for two years but eventually ended the romance in 2010. Though the relationship lasted for a couple of years, it was remembered for all the wrong reasons.

During their time together, a drunk Jenni once stabbed Tom and also cheated on him with Roger.

After she eventually split with Tom, the Jersey Shore heartthrob continued her dating affair with Roger and ended up married to him in October 2015.

As husband and wife, the duo nurtured two kids: a daughter named Meilani Alexandra Matthews and a son called Greyson Valor Matthews. Unfortunately, their happiness did not blossom as they filed for divorce in 2018, two years after marriage.

Unfortunately, her son Greyson was diagnosed with autism, and it had a significant impact on their marriage. After all, it's always a challenge for parents when their children are struggling with health issues and growing up different from other kids.

Her husband wasn't taking their son's condition so well and had a frequent burst of anxiety from time to time. As per the actress,

“That was a huge argument between Roger and I. [He said], ‘He’s fine, he’s fine.’ [Roger] had a nervous breakdown in the pediatrician’s [office]. My heart broke for him because he was like, ‘I just want my son to walk down an aisle and have a family of his own.’”

The couple tried to work together as parents, trying to give their son special needs and care that was required. Moreover, her child showed sign of improvement as she had cited,

"He’s in four or five different therapies, but he is just kicking ass. Every day gets better. Every day he’s learning something new. … It went from, he didn’t know one word or understand a word in September to now, it’s March and he’s combining two, three-word sentences. [He does] sign language. He knows his colors, his numbers.”

Also, Greyson's condition showed more improvement after undergoing Applied Behavior Analysis (ABA) therapy in 2019. Unfortunately, though, her child's health indirectly bought a challenge to the relationship that ended on a bad note. However, Jenni and Roger started co-parenting their kids even after the split.

After she separated from her husband, Jenni started dating her old friend, Zack Clayton Carpinello. The couple, who first met through Jenni's sister Erica, confirmed their romance via an Instagram post in April 2019. Jenni Farley with boyfriend Zack Clayton Carpinello during the shoot of a makeup video in August 2019 (Photo: Jenni Farley's Instagram)

Slowly they worked out their relationship and started as an official couple. But, much to the disappointment of their fans, there was a twist in the tale in the newly formed bond. Just after six months of their relationship, the couple split with a rather unexpected incident that took place in MTV's Jersey Shore episode, which aired on 11 October 2019.

Her new beau Zack was seen wrapping his arms around one of the contestants, Angelina Pivarnick, and asking about her sex life. Adding to the same, he also grabbed her back and was cozy with Angelina the whole time. The incident completely devasted Jenni Farley, and she could control her emotions.

Letting herself loose, she took to her Instagram and shared feeling devasted with the actions of her boyfriend. She also added feeling cheated for five long months and hurt to different levels. On the other hand, Zack was apologetic for his incident on the show.

Within hours of the Instagram post of Jenni, Zack responded with a justification of his own. He said:

"I made mistakes that I cannot take back, which I take full responsibility for."

Also, he apologized for the mistake he had committed and guaranteed not to repeat them. However, just after a week of their split, they appeared to had have reconciled as the reality actress was spotted with Zack in Universal Studios, Orlando.

On a sad note, the relationship took a turn for the worst as another Jersey Shore cast member reports that the two are taking time apart. Deena Nicole Cortese shared a few words to describe the status of their relationship. According to Deena, it was just one unfortunate episode for the lovebirds. As of now, Jenni and Zack are not together but they are working on their issues confirmed Deena.

Her ex-husband Roger also had some words to share about her recent issues. All roger wants is peace with his ex-wife. Talking about turmoils in her relationship, her ex-husband hoped Zack and Jenni could fix the issues they were having

Jenni also opened up about her heartbreaking divorce from husband Roger Matthews. In it, she talked about how people are supposed to be celebrating and starting a new chapter after the divorce, but she was getting heartbroken.

It was all quite stressful for her the entire process of divorce, dealing with custody issues and other problems she had. Now adding on the pressure of boyfriend troubles life is getting difficult for her in 2019.

Jenni Farley was born in Franklin Square, New York, on 27 February 1986. Her mother was mentally ill due to which she was separated from her at a tender age.

As a child without a mother, she was raised by her father, Terry Farley. While attending high school, she was very much into computers, mainly graphics designing. Though she did not eventually complete her studies, she opened up her website for graphics designing called MissDomesticated.

In 2009, during her time in college, Jenni got a chance to appear on the reality show, Jersey Shore. But, before making her first TV appearance, the 5 feet 7 inch (1.70m) beauty opted to make minor changes to her body.

While many celebrities go under plastic surgery, Jennie decided to have a breast implant before the shooting of Jersey Shore. After the first successful surgery, she again went through the same procedure in 2015.

With such an enhancement to her body, the reality star is turning heads with her sizzling hot looks in TV shows and series.

In the reality show industry, Jenni Farley is a well-established name. She has been part of numerous projects like The Mint, The Real, Snooki & JWoww, and Jersey Shore Massacre, earning a hefty sum for herself.

From her accolades in acting alone, she has managed to afford a mansion worth $1.4 million -which is on sale from June 2019. Not only her assets, but she also earns a salary ranging from $300,000 to $10 million, which gives us a brief idea about her ever-growing net worth.

On top of that, the 33-year-old is coming up with new productions in 2019, which will raise Jenni's value as a brand.