Did Jo Koy Wife Up His Beautiful Girlfriend? 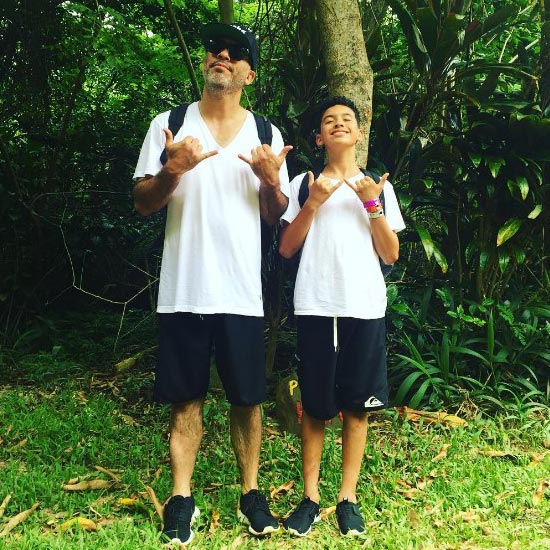 Filipino-American stand-up comedian Jo Koy received his fame from the show The Adam Carolla Show with his semi-regular appearances.

The once-married comedian cherishes his life with his son more than his professional life. He usually flaunts his fatherhood on social media claiming his son changed his life.

Adding to his happiness and social media, now we get to see another member, his girlfriend.

Who is Jo Koy's Girlfriend?

Jo is unmarried at the moment, but he is dating his beautiful girlfriend, Chelsea Handler. Chelsea is a comedian, actress, television host, and producer. She hosted the late-night talk show Chelsea Lately on the E! network from 2007 to 2014 and then released a documentary series, Chelsea Does, on Netflix in 2016 January.

Looking at their similar career paths, we can surely have a slight assumption about how the boyfriend and girlfriend met. The duo announced their relationship through Instagram; girlfriend Chelsea was the first one to upload a picture of them kissing on 27th September 2021 making them media official. He’s on tour, I’m on tour, sometimes we tour together. #VaccinatedAndHorny #FunnyIsFunny. All coming to a city near you!

The couple seems very in love and happy; after the said post, the duo constantly uploads snippets of them together, giving what fans love. Seeing them all happy and so in love, we cannot wait for the wedding bells as they would have such a lovely wedding.

Talking about marriage, the star was previously married before Angie King. But the marriage couldn't last as he divorced his wife while keeping the reasons for the split under the wraps.

Talking about his former wife, she is an art creator and curator by profession. Her focus is on religious sacramentals, saints, and prayers inspired art; the knowledge for her artwork comes from her Catholic Filipino upbringing. On the 24th of January, 2019, she even hosted her pop-up shop to promote her art.

Well, it can be assumed why the former pair were attracted initially. Jo and Angie's creative careers and similar Filipino ethnicity could have brought them together. However, the marriage couldn’t last, but one good thing came out of the fallen marriage: their son Joseph Herbert Jr. We can see that his son means the world to him, and everyone knows what children mean to their parents. Having such an amazing bond with his son Jo has committed his ex-wife to stay in a healthy relationship for the sake of their son. He even pays a high amount of child support to his ex-wife.

Jo never entertains questions about his ex-wife, not even her name, during his stage performances. "Mother of my son," "ex-wife," and "former girlfriend" are the terms that he prefers to use when it comes to referring to her. He hasn't even revealed her name. Even on Valentine's Day (2009), he said:

"I am so thankful for the mother of my son. She’s given me the most important person in my life – my son. I thank her for taking good care of him while I’m away and on the road, being a good mom to him and friend to me."

Parents have immense love and affection for their children, and yes! Koy is no exception. He loves and gets inspired by his offspring and holds immense gratitude for his kid. He reckons his son is the funniest guy he knows. He wants to keep his personal and dating life as silent as possible for the sake of his son.

Well, his little son, Joseph, is already in his teens. On his 15th birthday, Jo could not stop himself from gushing about the proudest moment. He quoted that he is happy with the way his son has bloomed into a responsible teenage boy.

You May Also Like:- Comedian Steve Byrne Secret Wedding To Wife; Stand Up Comedian Details

With an adorable long caption, he Instagrammed the sweetest picture of his son in April 2018 with the best wish he could give him. Moreover, if we go back to his previous married life, no reports on the cause of separation between him and his ex-wife have been found.

Jo Koy has been reportedly witnessed numerous times with other girls, but the exact source that will verify such reports doesn't exist. Though it may not be a genuine rumor, it is believed that he was once dating Tia Carrere,  an American actress.

But they are just rumors and not concrete statements. His dating life after his divorce was a mystery.

Being secretive and famous, some people were fast to assume Jo's sexuality and tag him as gay, but the rumors came crashing down when he uploaded a picture with a woman named Amy Bray, who, as per his posts, had a lot of meaning to his life.

Here in this post, he wished a very happy birthday to his ex-girlfriend, Bray. Speculations about their romantic connection turned out to be true when news broke that Jo got engaged to his fiance in 2017. But, the pair did not end up together and gradually broke up.

Jo is a satirical comedian who frequently tours the college circuit and performs in clubs across the country. He was also known for appearing on the sketch comedy show Chelsea Lately, as a regular panelist.

He is very hardworking and makes no compromises when it comes to his professional life; thus, this talented and determined comedian is said to have a staggering net worth of $5 million, according to celebritynetworth.

Koy has a mixed ethnicity with texture from his Filipino mother and European-American father. Jo left school to give full-time focus on comedy.

Born on 2 June 1971 in Tacoma, Washington, Joe is currently a Los Angeles resident. His career as a stand-up comedian began in 1994 at a Las Vegas coffee house. He is also involved with The Lupus Foundation, which aims to serve the community and bring awareness.