By LRU Writer | On: September 12, 2019
Child prodigy JoAnna Garcia started acting at her local theater when she was just age ten. Naturally, she...JoAnna had a whirlwind wedding. One day in August 2009 she was going on a date...Now, the couple boasts a happy life with two children... 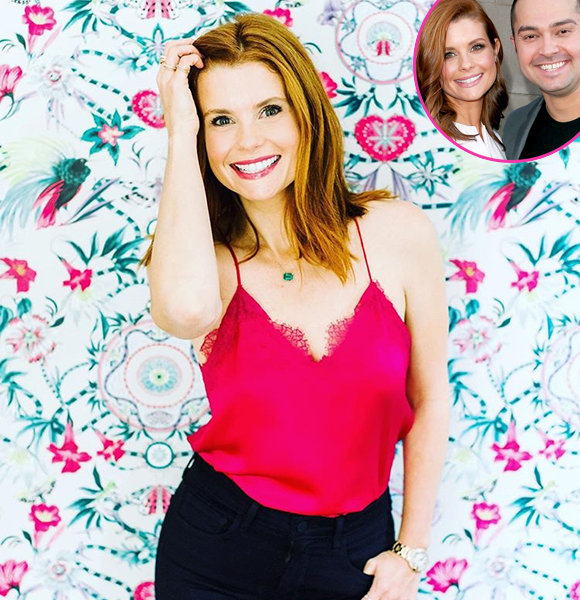 Child prodigy JoAnna Garcia started acting at her local theater when she was just age ten. Eventually, she got discovered by Disney. However, her parents - Jay Garcia and Loraine Garcia - rejected the offer and kept little JoAnna in school.

But, opportunity knocked JoAnna’s door again in the form of the 1992 TV series, Superboy. This time, her parents gave in, and she started her acting journey.

Today, JoAnna is remembered for her portrayal of Cheyenne Hart Montgomery in the sitcom, Reba, and parts in TV shows namely Gossip Girl and The Mindy Project. Further, her projects; TV movie Happy Accident and TV series Sweet Magnolias are in the making as of 2019.

JoAnna had a whirlwind wedding a few years back. In August 2009, she commenced a dating affair with former MLB player Nick Swisher. It didn't take much time for the couple to get serious as they got engaged after only nine months of dating.

Following the engagement, JoAnna and her boyfriend got married in an intimate wedding ceremony in December 2010 at Breakers Resort in Palm Beach, Florida.

On the joyous day, the TV actress stunned in a Monique Lhuillier gown. And, joining the gorgeous bride at the wedding party as bridesmaids were her Reba co-stars: Melissa Peterman and Reba McEntire.

Post the wedding, JoAnna and her husband hit another milestone when the duo became parents to daughter Emerson Jay Swisher on 21 May 2013.

The pair went for a round two in 2016 as the actress became a mother again, giving birth to a daughter named Sailor Stevie Swisher on 28 June 2016. As of now, the couple boasts a happy life with two children.

Looking back at JoAnna’s dating life, she did go through a public heartbreak once. It so happened that she was dating Trace Ayala - famous as Justin Timberlake‘s childhood friend. The pair’s relationship was rather serious as they got engaged on 18 June 2008. However, JoAnna and her man didn’t go forward with their wedding as they parted ways in August 2009.

JoAnna boasts a long career in Hollywood. Well, her over 50 acting credit is a testament to her busy career in the industry.

The 40-year-old actress’ memorable roles include TV shows; Privileged, Astronaut Wives Club, and Animal Practice. She has also dabbled in movies; American Pie 2 and Not Another Teen Movie.

Along with her acting roles, JoAnna’s purchase of a Los Angeles home worth $2.395 million in 2006 also hinted at her burgeoning net worth.

Thus, it is no surprise that she boasts a net worth of $8 million, courtesy of her remarkable career.

Along with a loaded bank account, she posses envy worth measurements. JoAnna stands at a height of 5 feet 5 inches (1.65 m) and boasts a weight of 54 kgs.