Joey King & Whimsical Relationship With Boyfriend! Fairytale Or Much More?

By LRU Writer | On: September 06, 2019
American actress Joey Lynn King, who is famously known for her role as Ramona Quimby in fantasy movie Ramona and Beezus, has a love life that's more like a fairy tale. She found her love during work and even starred as a couple on the screen with her boyfriend. 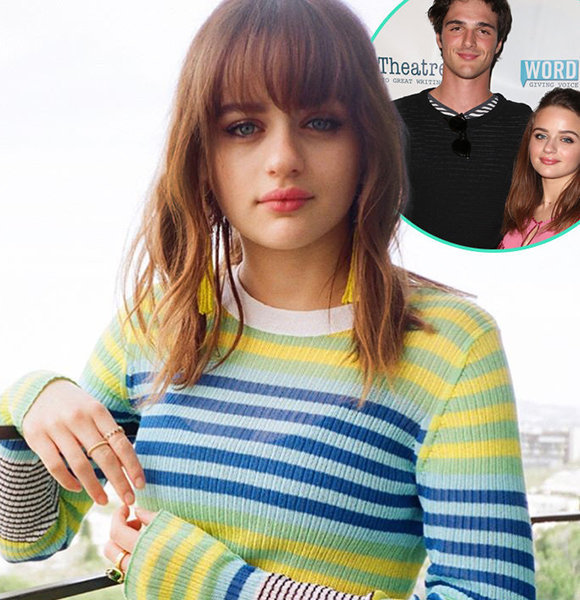 American actress Joey Lynn King, who is famously known for her role as Ramona Quimby in fantasy movie Ramona and Beezus, had a love life that's more like a fairy tale.

She found her love during work and even starred as a couple on the screen with her boyfriend. But, it turns out that some fairy tales don't always have an expected end. In reality, love is variable and not just a constant as shown on screen. Let's go through her experience and witness the actress' lovelife.

A job can turn out to be a blessing when you garner success and fortune with them, but it can sometimes be more fruitful than that. A perfect instance of such a scenario was the dating relationship of Joey.

Joey dated the handsome actor Jacob Elordi after she met him in South Africa on the set of their Netflix movie The Kissing Booth. Interestingly, The duos portrayed the roles as a couple in the film. Joey Lynn King as Shelly 'Elle' Evans and Jacob Elordi as Noah Flynn on the set of The Kissing Booth (Photo: movies.uk.com)

Joey played a high school teenager, who has a massive crush on Noah Flynn played by Jacob. When Joey signs to run the kissing booth at a spring carnival in the movie, she finds herself face-to-face with her long-term crush, and the two grow a budding affection for each other.

The pair's relationship in the movie appeared to have affected them in real life as the couple started dating and replenishing their time with each other.

When the Joey was asked how she and Jacob ended up together, she replied saying their relationship just turned out naturally. Talking with Rouge Magazine, she divulged saying,

"it was just so refreshingly natural.”

Well, working together sure gave them benefits.

Both the partners even flaunted their relationship in their social media accounts time and again. Back on 6 April 2017, Jacob Instagrammed a picture, where he was giving a piggy ride to Joey at the Hollywood Sign View Point.

Joey also uploaded a picture with Jacob on 29 October 2017. The couple can be seen in a matching Jack and Sally Halloween costume in the photo that Joey captioned writing that she and her boyfriend could live like that if they want.

You May Also Like: Jai Courtney & Girlfriend Madly In love, Wife To Be? Gay Talk of Suicide Squad Star

The pair also walked the red carpet as a couple at 2018's Daily Front Row Fashion Los Angeles Awards held at Beverly Hills Hotel, California on 8th April 2018. After days of their appearance, Joey and Jacob were spotted shopping at The Grove, Los Angeles, on 11th April 2018. They had worn matching blue jeans with brown belts and had walked hands in hands.

Moreover, the lovebirds were also photographed shopping together at the Farmer’s Market on 22nd April 2018. The duo spent quality time with each other, and some of the glimpses of their relationship were transparent in their social accounts. Jacob uploaded a picture with Joey in his Instagram on 2 May 2017. In the film, Jacob could be seen giving a forehead kiss to Joey while she was all in smiles.

Adding to their romance, in June, Joey flew into his set in Vancouver to surprise her boyfriend on his 21st birthday as the pair lived in different worlds miles apart from each other.

Moreover, the pair even attended the premiere of Joey's new film Slender Man, which was held on 8th August. During the event, they held tight to each other and even had some romantic moments together while Jacob planted a sweet kiss on Joey's head.

Likewise, Joey also spoke about her relationship with Us Weekly during the 2018 Teen Choice Awards that was held on 12th August. She revealed that being in a relationship with someone, who understands her profession does make it easier.

Well, the pair sure seemed delighted in each other's company as they often documented their date nights on Instagram, which ranged from putting on face masks at home together to date to concerts.

Joey, who has a net worth of $3 million, also shared pictures with Joey from time to time. On 10th May 2018, she Instagrammed a slow-motion video of Jacob carrying her and via the caption said that it was the feeling they are experiencing for the release of their movie.

Joey and her beau Jacob who were the youngest ”it” couple in Hollywood seem to have parted ways. Or, at least the fans think so!

Well, the couple who were so open about their romance on Instagram stopped posting about their passion altogether. On 14th November Jacob deactivated his Instagram handle, and just two days after the incident Joey posted a cryptic tweet about holding on to her dog.

Although Jacob did return around New Year 2019 to the famous photo sharing site, there was no sign of his girlfriend in his posts. Add to that; the pair weren't seen together for a while. The handsome hunk wasn’t present when Joey won Favorite Movie Actress at 2019 Kids' Choice Awards.

Besides, he chose to go to HBO’s Golden Globes 2019 with his Euphoria co-star, Hunter Schafer.

In 2019, the worst speculation of the couple's fans turned out to be true. It turns out Joey and Jacob had indeed parted ways from each other in late 2018.

In August that year, the Kissing Booth actress was spotted spending time with her newfound love, Steven Piet. And, her new boyfriend turned out to be the executive producer of her Hulu's show, The Act.

The new love birds attended the screening of Harry Potter and The Chamber of Secrets in Hollywood Forever Cemetery. Moreover, the two were joined by Joey's two sisters: Hunter & Kelli King, and their partners.

The two probably met through the filming process of The Act, but it's not yet known who approached whom first.

However, it seems, Joey's ex-bf Jacob Elordi isn't by himself after the breakup. He too is having his share of good times. Joey's former partner was spotted in Greece with his Euphorias co-star Zendaya Coleman spending vacation together.