By LRU Writer | On: July 08, 2021
By the time Johnny - who is of American nationality - had come out as gay in...Sadly, the Texas native's former partner, Estelle, passed away in...After straining his vocals, the legendary singer of African-American ethnicity sought...In the biography below, we discuss...he's haunted by the fact that he couldn't do right by his former partner(s) by marrying them in a flashy wedding... 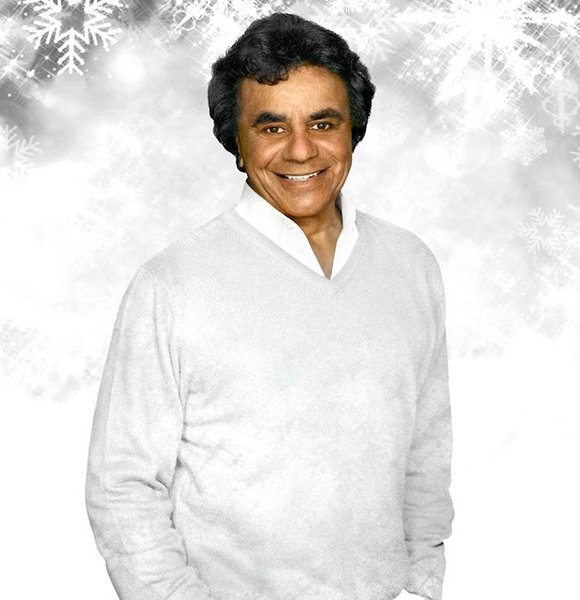 Only a few living musicians can compete with the renowned crooner, Johnny Mathis. He has made his impact on the music scene with the release of his first single, Wonderful Wonderful.

Similarly, since his debut, he has sold over 180 million records worldwide!

The A Certain Smile singer, who actively advocated for Civil and Gay Rights in the 1960s, musicianship, and activism go hand in hand for him.

Here, we shall unveil who Mathis is while dissecting the It's Not For Me To Say singer's preferences and beliefs on married life through references to his previous interviews.

Plus, the musician spills the beans on his romance with a past partner, who died a decade ago.

Johnny Mathis: The Singer Journey & His Coming Out Story

One thing for certain, music has been arguably the only single constant factor in Mathis' life across all of his romantic affairs with previous flames!

John Royce Mathis, the fourth of seven Mathis children, was born on September 30, 1935, in Gilmer, Texas. He got his passion for music from his father, Clem Smith, a small-time artist in Texas

Read Also:- Ashley Parker Angel Nearly Married & Had Wife | Not So Gay Or Is He?

Connie Cox, a Bay Area teacher, volunteered to instruct him when he was 13 years old in favor of his father completing odd jobs for her.

In many ways, Mathis is following in his father's footsteps in the music business. When asked about his father's influence, the native Texan once said:

“I’m just grateful to my dad. He was my best pal and the reason that I sing today is because I loved him so much. He was quite a wonderful singer. I followed in his footsteps and he guided me brilliantly.”

The songwriter returned to his true interest, music, after attending San Francisco State College with the intention of pursuing a degree in education.

A brief encounter with Helen Naga, the co-founder of the then-popular Blackhawk, ensured that his path to the music industry was only a short walk.

After being batted around by the industry's top record labels, in 1957, the Chances Are artist released Wonderful, Wonderful under Columbia Records. The song would eventually reach number one on the Billboard Hot 100. By the time the George Washington High School alumni came out as gay in 1982, he had a long list of successes under his belt, including Chances Are and It's Not For Me To Say.

The same Southerners who chastised him for his role in the Civil Rights Movement in the 1960s were the ones who threatened to kill the American artist once he came out.

When he sat down for an interview with British Tabloid Express in 2014, he went into greater depth on the matter. He stated,

"A few people in the Southern states didn't like it. I was in no real danger but when you're young it's difficult to get over. It doesn't bother me at all now."

Is It True That Johnny Mathis Married His Partner In A Spectacular Wedding?

With his soul-filled vocal performances, the singer grabs the audience's attention whenever he enters the stage. His fans would naturally assume that he is the same outgoing person outside of it.

However, nothing could be further from the truth. In actuality, the 85-year-old has been an introvert his entire life. Consider Mathi’s reluctance to hand out random interviews for instance. In a 2017 Express interview, the Gina hitmaker gave a rare insight into why he doesn't flaunt his love life, claiming that stardom compels him to give up a lot, but he decided not to give up his privacy.

According to records, the songwriter has only one public connection. Before coming out as gay in the 1970s, he had an on-again, off-again relationship with Ronettes vocalist Estelle Bennett.

Unfortunately, the former partner of the Texas native died in 2009. Mathis must be troubled by the idea that he couldn't do right by his former partner(s) by marrying them in a spectacular wedding as he nears the end of his time on Earth, right?

On the contrary, the artist is quite pleased with his single status. He informed the Guardian in 2014:

"I've never been married and I have no regrets about not starting my own family. I come from a large one so there are so many people around all the time. I've been very happy but I've never gotten married."

Nonetheless, he also appears to enjoy his role as the cool uncle to his 15 nephews and nieces. The A Certain Smile vocalist alleged in the same Guardian interview:

"I would have been a good father because I've been a father to my brothers' and sisters' children. I have about 15 or 16 nieces and nephews – all studious, smart, good-looking kids."

Often referred to as a romantic singer, he developed a drug addiction as a result of his detractors and the hardship of singing day after day.

Everything that happened after that would catapult him into a life of drugs and drink. In the same 2014 Express interview, he summarized his encounter with Dr. Marx, adding,

"I went to see him because I was doing five shows a night at the Copacabana in New York and got laryngitis. Everyone on Broadway went to him and so did the Kennedys. He gave me vitamin shots which brought my voice back beautifully but left me with a drug addiction. It was very traumatic but I just had to stop."

It was, however, the former First Lady of the United States, Nancy Reagen, who convinced him to join a rehab facility after she learned about his drinking problems at reception.

All we can say is cheers to Johnny Mathis for never conforming to cultural norms and doing what he loves, from establishing a career out of his hobby to coming out as gay!