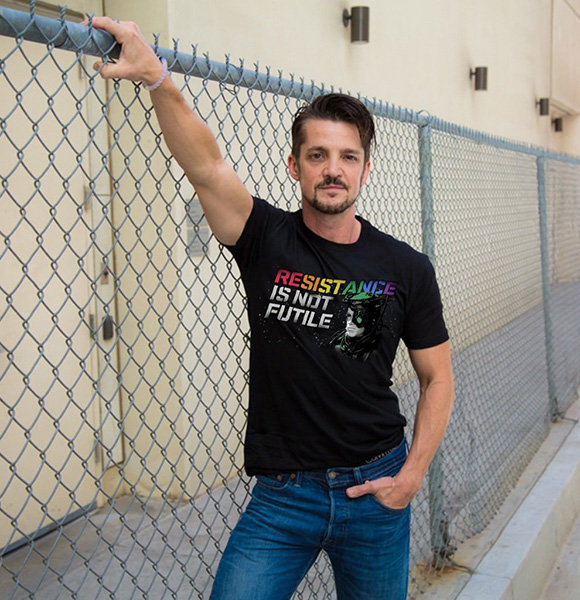 American actor, Jonathan Del Arco's early acting career, was held back by Hollywood's homophobic nature as coming out could end an actor's career.

But the determined actor was proud of his sexuality and didn't hide his orientation, but was always open about his sexuality

With no jobs and agent, he more focused on the advocacy which ironically turned his career on. Eventually, the Uruguayan native began working as a consultant for the Gay, Lesbian and Straight Education Network (GLSEN) which changed the idea of people on sexual orientation or gender identity.

Well, with his name as an actor and an activist, he cherished a long-time married life with a partner which he flaunts proudly on social media.

The openly gay actor, Jonathan who beautifully portrayed the gay character in TNT's The Closer, is always open about his sexuality. And soon after he finished his high school, he moved to New York City to start his career as an actor.

But in the city, AIDS was epically ravaging the gay community, and the disease did not spare the life of his partner. He lost his first partner to AIDS.

After he lost his partner, he moved to Los Angeles but still, he was not able to forget the traumatic loss of his partner which led him to live under the survivor guild( a mental condition that person thinks they have done something wrong by surviving a traumatic event).

In addition to the syndrome, he still tried his luck to be an actor and then 24 years old passionate Jonathan could not get the role as he was truthful about his orientation.

The Major Crimes star is married to longtime partner Kyle Fritz, a talent manager since 1992.

He was just aged 26 when he got married to Kyle and probably no one had expected that their relationship would long last. But still, after 26 years of married life, they are going strong with their relationship.

In fact, Jonathan gushed that they have been together since their elementary school but it seems only after he lost his first partner to AIDs, the two started dating.

And here the couple is already into their 26th wedding anniversary. On their 23 years of married life in Feb 2015, Jonathan Instagrammed the adorable picture with his partner. The Closer star and his husband flaunts their every moment onto Instagram which has already caught the breath of many fans followers. On 24 October 2018, he Instagrammed the glimpse from the afternoon tea date and they seemed to more into love.

Similarly, the couple seems to share the dashing son as he tweeted the glimpse from his son's wedding day. Sharing the picture from the vineyard, he wrote:

My two beautiful gay sons got married in vineyard at sunset

Well, the happiest husband and proud dad created the environment for the LGBTQ people so that they would face no difficulty while coming out.