Jordan Calloway Still In Search of a Girlfriend? 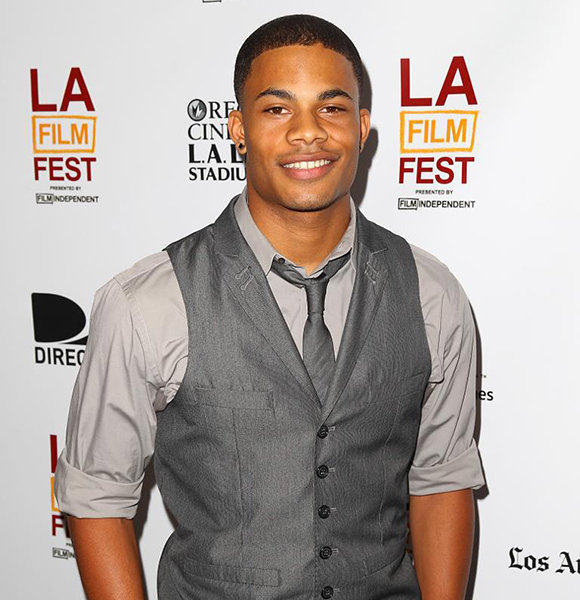 A person doesn't want their private things getting exposed. Similar is for the celebrity like Jordan Calloway, who doesn't enjoy his personal life getting the media's attention.

Jordan is one of the favorite actors and has shared many things about his personal life with his audience. However, he has kept his dating life well hidden. Is he in a relationship, or has he had any girlfriend? Let's find out.

Jordan Calloway is already a renowned name in the entertainment world, but would you believe this handsome hunk might be single?

Explore: Inside Scoop on Lily Travers's Life- Married or Single?

On February 15, 2012, Jordan happened to reply to one of his fans (Ms_Malone on Twitter), where he mentioned that he is only his Mom’s Valentine.

Jordan talks about not having a girlfriend on Valentine's Day. (Source: Twitter)

It seems like Jordan still hasn't found a girlfriend to celebrate Valentine's Day.

However, he has been involved in having a celebrity girlfriend.

There were rumors that he was dating his Unfabulous co-star Malese Jow. Fans were delighted to learn that he had finally found a girlfriend. However, both of them being their dating rumors.

After that, he was dating actress Alexandra Shipp, but they appeared to be more of a friend than a couple.

Jordan has always put his family and his work first. Maybe that's why he doesn't have time to date or find a wife.

Jordan is often known as a family guy. He mostly spends his free time enjoying himself with his family. He especially shares the moments with his niece and nephew, who are the children of his brother Niles Calloway.

Learn About: Who Are Bodhi Ransom Green's Celebrity Parents? Jordan wished his niece on her birthday. (Source: Instagram)

That's not all! Jordan also gave away a glimpse of his bond with his nephew while going on their family road trip. Jordan had a great time with his nephew and niece during his family vacation. (Source: Instagram)

Jordan has always been close with his family. With his family's support, he has established his name in the industry.

Jordan is the son of actress Tony Calloway and cinematographer Joseph W. Calloway. Unlike other celebrities, Jorden is a college graduate. He graduated with a Bachelor of Fine Arts in Cinematic Arts Production from Azusa Pacific University.

Jordan shared a throwback picture of his graduation day before, on February 26, 2016, which has been deleted, with the caption that reads:

"#TBT College Graduation w/ my lil PI sis... wasn't easy.
"When the tough gets going, the going gets tough. Whether you want to or not." -6th grade teacher."

As acting runs in his blood, following his parents' footsteps, Jordan has not only continued the family's profession but also excelled in his predecessors.

Jordan made his acting debut in 2000, which has garnered much success and fame through more than two decades of his contribution to the entertainment industry.

From the same series, he gained acclaim for Best Young Ensemble Performance in a TV Series (Comedy or Drama) in both 2006 and 2007.

His popularity touched its peak when he played Khalil Payne in Black Lightning.

Besides his awesome acting, he is also famous for his attractive physique. The actor possesses an attractive physique that is more than enough to grasp attention at the first look. The alluring physique with the killer looks, Jordan's physique is something every fan wants to feast their eyes on all day long.

Still, this handsome has not found someone to spend his life with. We hope he will be more about his dating life in the coming days.

Stay tuned to get more updates on Jordan Calloway.