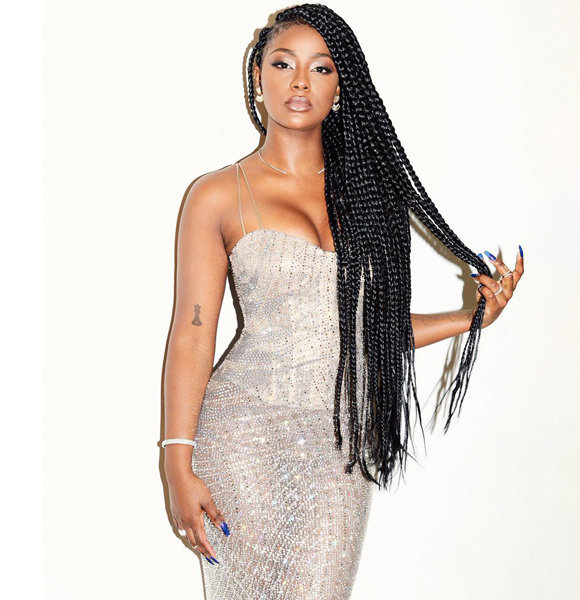 A promising artist, Justine Skye is swiftly climbing through the ranks and has established herself as a talented singer in the music industry. She has worked with the likes of Tommy Hilfiger, Jay Z, and Tyga at a very early stage of her career.

Being as beautiful and talented as she is, the fandom really wants to know more about the rising star, with one question always constant about her boyfriend.

So, let's break the ice, shall we?

Does Justine Skye Have a Boyfriend?

Single now singer is currently focusing on her rising career and does not have a partner at the moment.

Nevertheless, she had earlier been in a relationship with her now-former boyfriend, Giveon. The couple started dating on 23rd December 2020 and later parted ways in October 2021. Moving on, the reason for their split was not made a public knowledge.

Before her former partner Giveon, Justine dated DC rapper Goldlink. She opened up about her relationship via Instagram on 16 January 2019, where she admitted to being in a relationship with her new boyfriend for three months. Before dating Goldlink, Justine was in a constant physical and mental drain. She had accused her ex-boyfriend Sheck Wes of domestic violence and refusing to accept his crime.

However, after much investigation, Sheck Wes was adjudged not guilty.

Based on the incident between Justine and Sheck, her former-boyfriend Goldlink released a song titled Justine’s Interlude in January 2019. The song addressed the allegations of domestic violence and the relationship between Justine and her ex-partner to make her feel better.

Inheriting an Afro-Jamaican and quarter Indian ethnicity, Justine was born on 24 August 1995.

Being a native of Brooklyn, New York, Justine stands at the height of 5 feet 9 inches (1.79 meters).

Justine, who is at the age of 26, was previously famously recognized for her purple-tinted hair and brightly-hued lipstick. Now adding on to her charm, she is followed by millions worldwide for her beautiful voice and amazing personality.

Justine is the daughter of her parents: Nova Perry and Christopher Skyers. Being the only child of her parents, she has no siblings. Her mother, Nova, is an entertainment lawyer, whereas her father, Christopher, works as a corporate merchandiser.

Extroverted now, the singer was shy as a teen. Justine dropped out of high school to pursue a career in music but eventually was homeschooled by her parents.

It was when Justine visited the music panel of BMI with her mother and stunned everyone through her singing talent that Justine finally overcame her shy nature.

With releasing more than 30 songs, Justine Skye has made a name for herself in the music industry; moreover, she earns an average of $7.2K - $115.2K per year from her Youtube channel, which has more than 200K subscribers.  In addition to that, she has also established herself as an actress, which has further boosted her net worth.

She has also worked with the likes of Tommy Hilfiger, Jay Z, and Tyga at a very early stage of her career.

To date, she has featured in movies and TV shows like Wonderland and The Fashion Fund. Besides acting, Justine's hit singles like You Don't Know Me, Hard Work, and Everyday Living has further propelled her net worth up to $2 Million, according to Celebrity Net Worth.

Recently she has released her single What a lie on 22 April 2022, which has already surpassed 200K views.

Witnessing the star singer's rising and growing career, we cannot wait to update you guys more on her!