By LRU Writer | On: June 14, 2019
Katya Elise Henry started her Instagram in 2015 to document her fitness journey...she had a fair share of dating affairs in her life...Things were going well for the entrepreneur and her boyfriend... 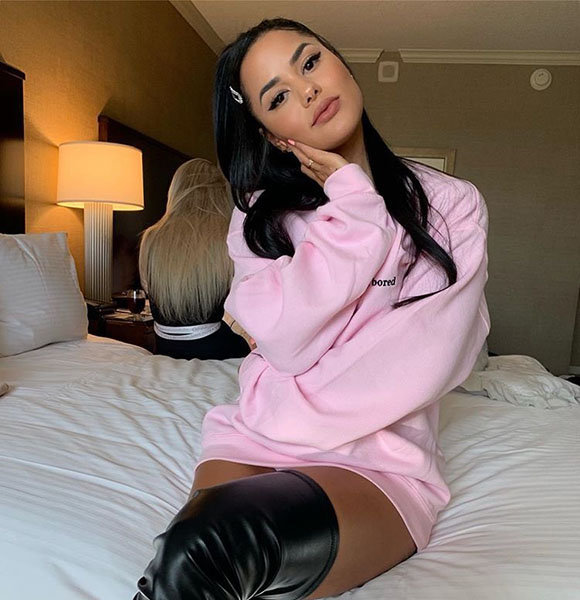 Katya Elise Henry started her Instagram in 2015 to document her fitness journey. She was a nanny at the time. Since her social media began inspiring people towards fitness, she took up personal training full time and started website Workouts by Katya.

Today, the 25-year-old is one of the successful Instagram fitness star amassing more than 5 million followers on the social media giant, Instagram, and a popular fitness website.

Katya was born on 14th June 1994 to Derick Anthony Henry and Tawnya Lynn Nelson. Her bodyguard father and personal trainer mother had instilled the healthy way of life in Katya since childhood.

Thus, she was always into staying fit; she was part of cheerleading till the age of 18, at her Desert Mountain High School. Before attending the educational institution, she went to Prior Lake High School and then to Horizon High School.

Besides the lesson of practicing healthy life, the fitness expert also boasts multi-ethnicity from her parents. She boasts mixed race of African American, Swedish, Native American (Sioux and Potawatomi tribes) and Russian ancestry.

Katya comes from a family of three siblings; she has two sisters; Tanaya and Gabrielle. Tanaya is a model, actress, and a jewelry designer.

Katya had a fair share of dating affairs in her life.

She famously dated singer Austin Mahone in 2015. The pair met via Instagram and started dating. Things were going well for the entrepreneur and her boyfriend. They were often photographed enjoying the quality time together.

But in 2016, due to the absence of their public appearances as a couple, speculation grew that the pair had separated. Finally, Katya’s singer boyfriend settled the matter on Mario Lopez’s show Extra in February 2017; there the singer revealed that he was single.

Similarly, the fitness star also corroborated the news and revealed her single status via a YouTube video on her channel in August 2017.

Fast forward to 2018, Katya started dating NBA Lakers player Kyle Kuzma, but the pair broke up in 2019. Post-breakup, she addressed her single status via the YouTube video entitled Q&A *I finally addressed it* on 11th June 2019.

Katya - height 5 feet 2 inches (1.57 m) - is a confident woman in a real sense. She came from nothing and built a fitness empire.

Today, her workout videos are one of the accessible fitness content, followed by millions of people. She earns an average annual salary of $53,136, as a fitness model and her YouTube channel tilted Katya Elise Henry fetches her an average of $1.8K - $29.3K a year. Well, she also partners with brands for workout products and promotes them via her Instagram.

No wonder, her net worth is increasing day by day.