By LRU Writer | On: March 29, 2019
American fashion model, Kimora Lee Simmons is the top model of the industry who was walked for Chanel at the young age of 14. Perkins has been featured on the cover of the German, Indonesian, Singaporean and Malaysian editions of Harper's Bazaar. Born to an African American father and a Japanese mother, Kimora Lee Simmons holds multi-racial blood in her vein. For her mixed ancestry, she also used to be the target of bullying. Not only she was born to multi-racial parents but also her children are mixed ethnicity from her different racial relationships. 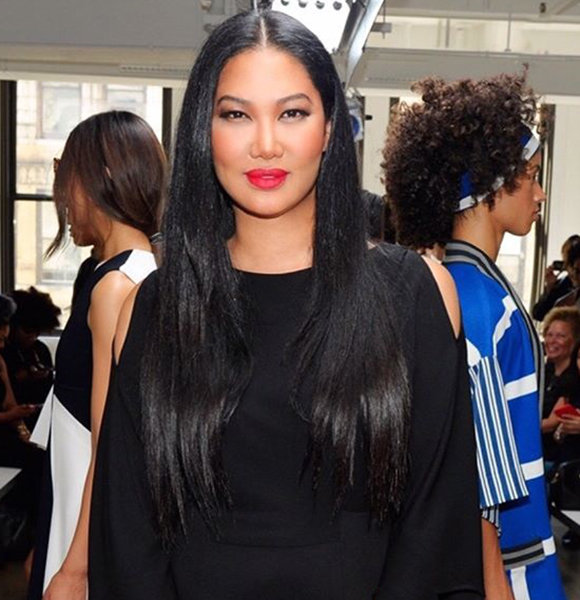 American fashion model, Kimora Lee Simmons is the top model of the industry who walked for Chanel at the young age of 14. Perkins has been featured on the cover of the German, Indonesian, Singaporean and Malaysian editions of Harper's Bazaar.

Born to an African-American father and a Japanese mother, Kimora Lee Simmons holds multi-racial blood in her vein. For her mixed ancestry, she also used to be the target of bullying. Not only she was born to multi-racial parents but also her children are of mixed ethnicity as a result of her different racial relationships.

The mixed ethnicity model shares four children with the partner of different racial groups which has made her family "A Family of Multi-Racials.'

She met her first husband, Russell Simons during the New York City's Fashion Week in 1992. At that time, she was just 17 and was in high-school whereas he was 35.

You May Like:- Asian Ethnicity Actress Kristin Kreuk Leaving Acting Career? Does She Plan to Getting Married or Something Else?

Despite their vast age difference, the then 23-year-old model got married to the then 41-year-old Russell on Caribbean Island of St. Bart's on 20 December 1998. The couple welcomed their daughter Ming Lee Simmons on 21 January 2000. After two years of Ming's birth, the couple got blessed with another daughter named Aoki Lee Simmons on 16 August 2002.

Also, Ming and Aoki got spotted stunning the ramp with their model-mother. Kimora Simons' walking on the ramp along with her two daughters (Photo: Kimora Simmons' Instagram)

The couple separated in March 2006. And after two years of separation, she filed for divorce in March 2008 and was finalized in January 2009.

After the separation with the first husband, Kimora shared a romantic relationship with actor and model Djimon Hounsou in March 2007. The couple also participated in a traditional Benin commitment ceremony in the summer of 2008. Similarly, they welcomed their first child, a son named Kenzo Lee Hounsou in May 2009. The couple, who was yet to tie with the sacred marriage vows legally, announced their separation in November 2012.

Next, she got married to former Goldman Sachs banker Tim Leissner. Kimora announced about their marriage in February 2014 and disclosed that they had been married for a while.

Also, the married couple welcomed their first child, a son named Wolfe Lee Leissner in April 2015. The model-turned-fashion designer and her husband Tim asked the rap mogul Russell to be the baby Wolfe's godfather. Kenzo's daddy, Djimon Houston also made frequent visits to the family at various functions. Well, since Kimora's daughter have grown up to a beautiful teenage girl now, her eldest daughter Ming Lee Simmons looks like her mother; whereas, her another daughter Aoki Lee Simmons is the daddy's girl. Also her son, Kenzo Lee Hounsou rectify like his father, Djimon Hounsou and Kimora's youngest Wolfe holds the looks of both mother and father.

As the pace of time, Kimora's children are growing up which makes a beautiful combination of mixed ethnic family.

Besides her good looks, Kimora's kids have seemingly inherited their dad's intelligence. Her middle daughter Aoki, in particular, is the brightest of the Kimora's children.

At age 16, Aoki got accepted into Harvard. On 28th March 2019, she announced the news via Instagram. Sharing a clip of Kimora and the company reacting to the development, she gushed:-

In response to the story, Kimora congratulated her daughter for getting into Harvard "on her own merit."

The news comes weeks after Aoki took to Instagram to rant about the racism she faced in school. Without divulging the name of her accuser, she blasted the racist white kid for throwing the N-word around her.

Kimora Former Brother-In-Law:- How Much Is Joseph Simmons Net Worth? Get Family & Kids Details Here

Kimora too had something exciting to share earlier that month. She set the Twitter ablaze after announcing she was relaunching the Iconic women urban clothing line, Baby Phat.

Speaking to HipHop Dx after the announcement, the model-turned-entrepreneur revealed that both of her older daughters were going to play a big part in Baby Phat's relaunch and subsequent rebranding.

Back in 2004, her then-husband Russell Simmons had sold the company for $140 million.