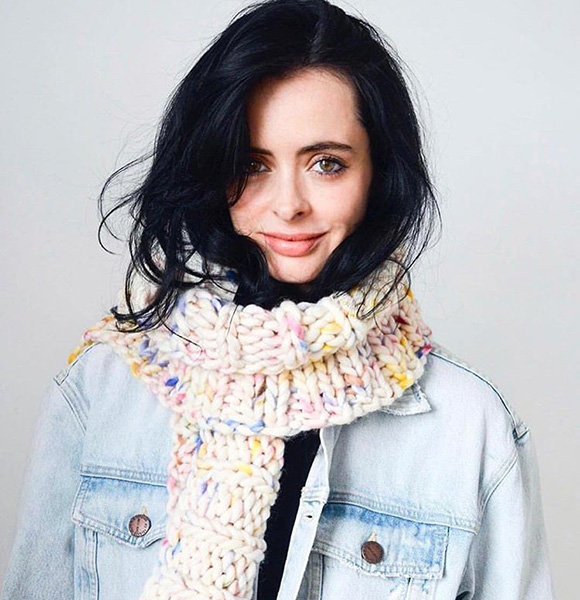 Best known for bringing a realistic feel to the Marvel's comic character of Jessica Jones on Netflix's web series of the same name, Krysten Ritter has established herself as an actress and musician in her two-decade-long career.

Formerly a supermodel, she began her modeling career at an early age of 15. By the time Krysten was 18 years old, she had already turned into an international model, performing catalog, print, and runway work in popular cities like New York, Milan, Paris, and Tokyo.

Shifting her interest later into the entertainment industry, the actress has experiences in both television and silver screen. Her work on various movies and TV shows include hits like Don't Trust the B---- in Apartment 23, Veronica Mars. Gilmore Girls, Gossip Girl, Gravity, and Breaking Bad.

The news of Krysten's pregnancy in February 2019 raised a lot of questions on her dating life and married status.

While Krysten - age 37 - was pregnant with the baby of her musician boyfriend Adam Granduciel, she never revealed the nature of their relationship to the general public or media.

So, some considered him as her husband, others claimed that she has was not married to her longtime partner. Regardless of her status, Krysten shares a beautiful baby with her husband-prospect, Adam.

The actress and her boyfriend have been dating each other since early 2014, and it was about time the pair took their connection to the next level.

In June 2019 - in anticipation of her first baby's arrival - Krysten's friends threw a baby shower for her. The theme of the bash was music. And, the guests attending the party got to enjoy pastries designed in the shape of instruments.

A month later, the Breaking Bad actress and her musician boyfriend Adam got blessed with their first child — a baby boy named Bruce Julian Knight Granofsky. They welcomed their first bundle of joy Bruce on 29th July 2019 at the Cedars-Sinai Medical Center.

Credit to the duo, they refrained from sharing the news to the world. Instead, the new parents savored the milestone to themselves.

Even when media outlets got hold of Bruce's birth certificate in the second week of August 2019, Krysten and Adam refused to share their experience immediately.

Krysten Ritter is a beautiful woman, and it comes as no shock that she dated a few boyfriends before settling down with the American musician and record producer.

Dating back to the year of 2009, she romanced her Gravity costar, Ivan Sergei. With blooming romance on the sets, they were quite open about their dating life, openly kissing and cuddling; however, their relationship lasted no more than a year.

A year after the split, Krysten made headlines when she was reported to be dating True Blood actor Brian Geraghty in 2011. Her then-new boyfriend lasted one more year than her previous relationship but eventually ended in 2013.

Growing up on a beef farm near Shickshinny, her parents eventually separated. While her father relocated to Benton, Krysten stayed back with her mom at Pennsylvania.

It was during her final years at the high school where the slim beauty of 5 feet 9 inches (1.75m) height and weight of 57 kgs received the opportunity to work as a model.

While her parents wanted Krysten to enroll herself in the armed services, she decided to concentrate on her modeling career instead.