By LRU Writer | On: June 11, 2019
Lara Trump boasts one of the most famous surnames in the world...Lara- 5 feet 9 inches(1.8 ml)- spotted her future husband at a mutual friend’s party...After the arrival of another baby, Lara family will be complete with two kids... 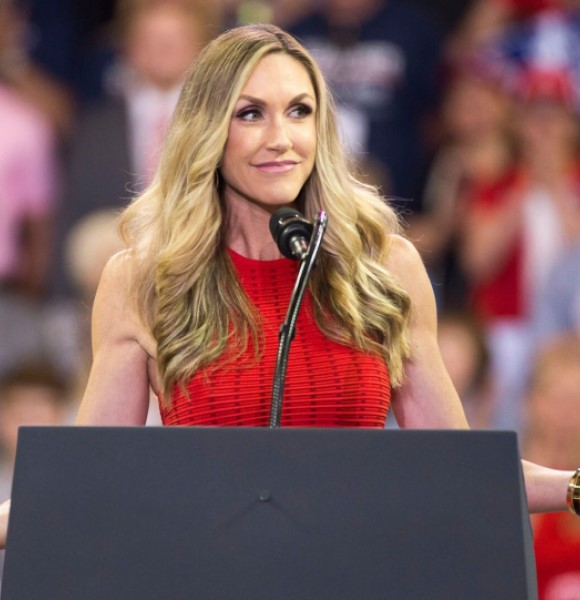 Lara Trump boasts one of the most popular surnames in the world. Born Lara Lea Yunaska, she got her last name via her marriage to Eric Trump - son of 45th President of the US, Donald Trump.

Besides being the first family’s daughter-in-law, she is senior campaign adviser for Trump’s 2020 re-election campaign. Previously, she worked as a TV producer at Inside Edition from 2012 to 2016.

Lara got married to Eric Trump on 8th November 2014.

The pair tied the knot after dating for six whole years. The reason behind such long courtship was because Lara's then-boyfriend, Eric wanted to be very sure of the relationship before taking the plunge. Well, the pet parents had a normal meet-cute in spite of running in rich-high profile circles. Lara - height 5 feet 9 inches(1.8 ml) - spotted her future husband at a mutual friend’s party in New York as both of them were the tallest one there. However, they didn’t see each other for a whole three months after the first meeting.

But after the first date, the pair’s romance took off, and they started dating officially.

Lara and her husband finally got down to business as they decided to get married on 8th November 2014.

However, there was a glitch before the big day. Just two weeks before the wedding ceremony, Lara - an experienced horseback rider - got into an accident. The unfortunate incident broke her wrists that required surgery.

However, the bride-to-be bounced back and got married on the set date.

While she wore beautiful Vera Wang gowns at the ceremony, she let go of the cast at the main event. She wore fingerless gloves during the reception to hide the bandages. The service took place at President Trump’s Mar-a-Lago estate in Palm Beach, Florida.

Eric’s elder brother served as the best man and his elder sister, Ivanka Trump became a bridesmaid for the occassion.

Add to that, Ivanka’s husband, Jared Kushner officiated the wedding while their daughter, Arabella, served as the flower girl. Besides being Lara’s sister-in-law, Ivanka is a major celebrity.

Interestingly, people reportedly go to doctors to get plastic surgery to look like her.

The beautiful union has blessed Lara and her husband with a son named Eric ''Luke'' Trump, born on 12th September 2017.

Well, the lovely couple are set to welcome another baby into the family. The former TV producer is pregnant with another child due in August 2019. After the arrival of another baby, Lara family will be complete with two kids as she always wanted at least two children.

As a blossoming family with a baby due, there is no sign of divorce between Lara and her husband.

Lara used to make an annual salary of $102,011 working as a television producer at Inside Edition. Post leaving her job; she doesn’t worry as her husband is estimated around $300 million as the vice president of the Trump Organization.

Taking about Lara’s education, she went to Emsley A. Laney High School then got into North Carolina State University to study Communications and graduated in 2005. No one to slow down, she got a degree in Pastry Arts from the French Culinary Institute in New York.