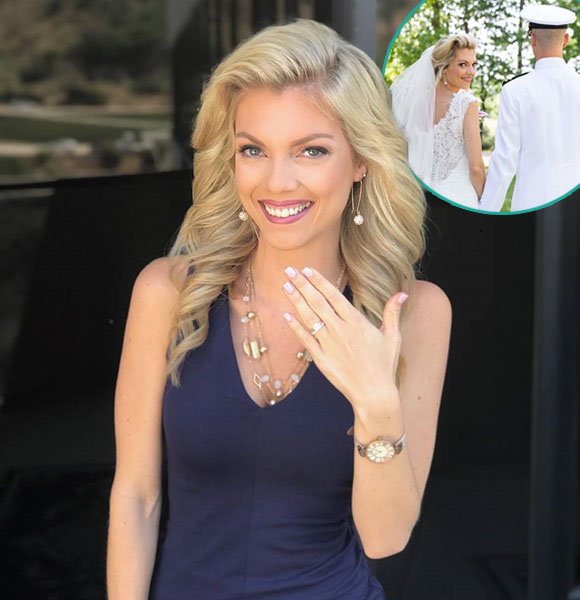 Known with the verse, 'Beauty With the Brain," Tipping Point's host, Liz Wheeler was showered with the well-wishes and the congratulatory message when he shared the gorgeous picture from her wedding day.

Well, her followers envy her husband for getting the beautiful wife like Liz and also denoted him to be the luckiest guy in the world. Keeping the identity of her husband low-profiled, she claims that she was dreaming to get married since she was a little girl!

Walking down the aisle with the beautiful wedding dress was the TV host's flavor to her special day!

Liz, who has been dreaming of a wedding since her childhood, got married to the love of her life flaunting her acoustic wedding gown. However, the 28 aged hosts has kept her share of hesitation to reveal her husband's identity.

Just after being married, she took her moment to Instagram by sharing the side shot where she looked adorable in the wedding gown holding the flowers on her hand on 16 August 2017. She captioned the picture:

"90 hours married. My heart is overflowing with joy"

The then-newly wedded bride shared the picture from her wedding day with her then-boyfriend via Instagram on September 2017, where she was holding the hands of her husband on the back shot, looking at the camera whereas her husband was standing straight. After her marriage ceremony, she returned to her show, Tipping Point only after returning from her romantic honeymoon. She took to Instagram flaunting her gorgeous ring and also announced her followers that she was returning to her show tonight on 22 August 2017.

"Call me Mrs!!!! So excited to be back on Tipping Point tonight at 9pm ET!"

Liz, who resides in San Diego with her husband, is going strong with her married life. On their first anniversary, her husband gifted her the pink colored close-shoe which she gushed on her Instagram account on August 2018 quoting: "Anniversary shoes."

With her one year of wedding anniversary, she also revealed that she was dreaming about getting married since she was a little girl. Since her childhood dream fulfilled, she is also strongly committed to her career.

Read Also:- Travel Guide Writer Rick Steves Ended The Relationship With His Wife, Anne Steves in 2010. The Reason Behind the Divorce?

Liz Wheeler was born as Elizabeth Wheeler in July 1989 in Southwestern Ohio and grew up along with her three sisters and one brother. Her father owns a small business whereas her mother spent her time nurturing their children.

Beside her high-profile personality, she has not revealed her siblings' identity. She took to Instagram on 14 July 2017 sharing her reunion with her siblings quoting more Wheelers are still to come. The Penn State University graduate also hails political background as she had served as a commissioner on the Board of Zoning Appeals in her hometown in Ohio. Also, she is the youngest person in the city's history to hold that position.

The host, who holds the white ethnicity, started hosting her own primetime show after joining One America News Network's Tipping Point in 2015 which held her to the height of her career.

Before entering into the entertainment world as the host of Tipping Point, she was also engaged at the RecruitMilitary, an organization that helps the retired US army to start a normal civilian life.

You May Also Like:- Marie Avgeropoulos Has A Thing For Dating And Turning Co-Stars Into Boyfriend! Any Chance She'll Get Married To Any?

Also wrote a book with 13 other young Americans on what it means to be young and conservative and their book reached number 2 on Amazon's Kindle bestseller list in the Civic's category.

Well, since she has been working in the OANN from 2015, she might earn more than the average salary from the network which is $70 K. With the handsome salary, she might own the hefty net worth which she has confined at the moment.