By LRU Writer | On: October 20, 2019
American born actress and singer, Lucy Hale is mostly recognized for her...A role she came into contact since 2010, Lucy's character went on to continue the role until the shows...generating dating rumors...addition to her numerous tattoos, that promotes her current...From an early age, Lucy was mostly homeschooled but did...in net worth, Lucy reportedly acquired a sum of... 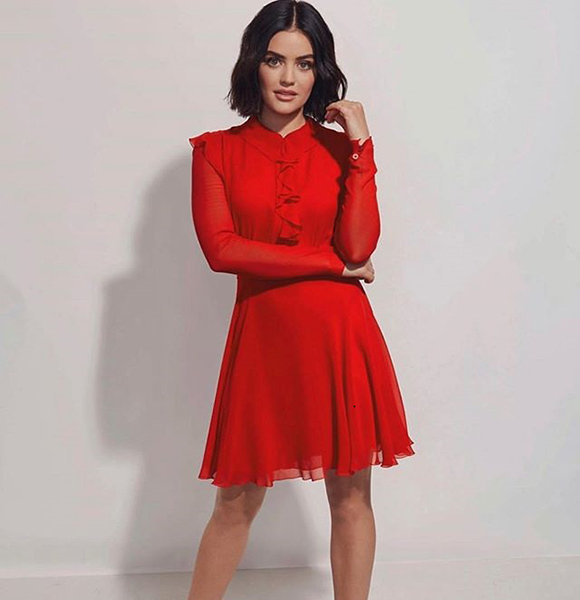 American born actress and singer Lucy Hale is mostly recognized for her work on Pretty Little Liars as the creative & artistic Aria Montgomery.

A role she portrayed since 2010, Lucy's character went on to continue the position until the shows ending in 2017. In the course of learning and adapting to her character on the show, Lucy also made appearance's on plenty of other shows & movies including How I Met Your Mother, The Apostles, Privileged, Fear Island, Truth or Dare, and The Sisterhood of the Traveling Pants 2.

In the past few years, she has been romantically linked to a few names, including heartthrobs like Adam Pitts, Anthony Kalabretta, Riley Smith and Ryan Rottman.

Her first public relationship was with musician boyfriend, Anthony Kalabretta. The couple's courtship began in 2015.

Lucy and Anthony would be mostly seen enjoying each other company from a cuddly walk to a day on the beach during their relationship. Their social media was filled with moments of them together. However, their relationship couldn't last and they separated in 2017.

Deleting and unfollowing each other respective accounts, Lucy and Anthony made sure that their seperation was official. Both never made any comments about their split, so the reason behind their seperation remains unknown to date.

Next in her life, came her Life Sentence co-star Riley Smith. The news about their dating came in February 2018 when they were seen together, but by July that year, the duo called it quits.

Only a little while after the break-up, Lucy was spotted holding hands with Ryan Rottman, quickly generating dating rumors but to no avail. The pair were never seen together since then. Lucy even went on to claim that she wasn't dating shortly after. As of 2019, she is rocking golden hair and a new ink in addition to her numerous tattoos, that promotes her current single status and view on self-love.

From an early age, Lucy was mostly homeschooled but did take lessons in acting and singing. The beauty initially shared a passion for the musical arts.

Lucy would compete in various competitions and even created her music. She also moved to Los Angeles in hopes of getting a record deal.

However, she found herself indulged in acting roles like Drake & Josh, The O.C., and How I Met Your Mother. Since then, the actress has made profound appearances in movies and TV series alike.

Over 37 acting credits, multiple awards, and nominee for her work, Lucy is rising to stardom no doubt. Working on a few projects set to release in 2020, the actress is soon to garner further attention for her acting chops. Her upcoming projects are Fantasy Island, The Hating Game, Katy Keene, A Nice Girl Like You, Big Gold Brick, Son of the South.

With a fantastic career in the last decade, it is only in numbers in which her success is left to be represented. Holder of $6 million in net worth, Lucy - height 5 feet 2 inches (1.57 m)- reportedly acquires a sum of $42 thousand per episode of a TV show.