By LRU Writer | On: May 20, 2019
Irish telly host and radio presenter Lucy Kennedy...her exact net-worth is still under review...She shares three budding children with her husband Richard, her daughters named James and Holly along with their son Jack... 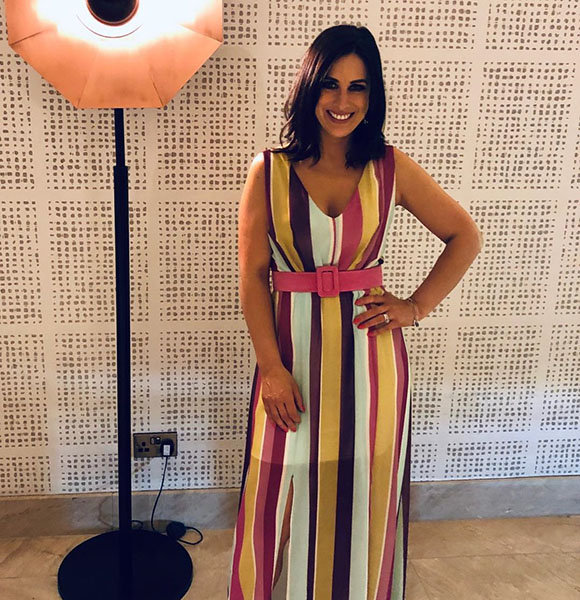 Irish telly host and radio presenter, Lucy Kennedy is notable for her recurring role as a host in shows like Livin with Lucy(2008) and The Podge and Rodge Show(2006). She won the title of a favorite female TV presenter in 2009s TV Now Awards.

Many prominent celebrities like Brian McFadden, Christy Dignam, and Katie Hopkins appeared in her famous show Livin with Lucy(2008) which aired for consecutive six seasons in a row.

Lucy was born on 21st April 1976 in Dublin, Ireland. She mostly grew up with her mother and two sisters since her parents got divorced while she was 14 years old. Her mother was a designer by profession, and her father is a famous Irish television personality.

Though Lucy has gone onto achieve tremendous success as a television host, she didn’t always want to work in TV.

As a child, she wanted to be involved in a different profession, including being a pilot, and psychotherapist.

However, life had different plans for the 43-year-old as she started her TV career as a host for a reality show titled The Ex-files(2005) on channel RTE. She then went on to host shows like Podge and Rodge(2006) and Living With Lucy (2008) on the same network.

She presented Irelands Got Talent(2017) and even hosted her talk show The Lucy Kennedy show(2009) where her father accompanied her as a pianist for the show.

Apart from working as a TV host, Lucy Kennedy has co-hosted various radio programs including The Breakfast Show on Radio Nova.

Lucy is married to her husband, Richard Governey since 2008. They first met one another during her sister's wedding and went onto marry each other after dating for eight years. Lucy Kennedy with her husband, Richard Governey on their wedding in 2008 (Photo: rsvplive.ie)

Their wedding was held quite far in Santa Maria since she and her husband wanted the wedding to be as private as possible.

During the ceremony, Lucy Kennedy wore a beautiful Grecian Style gown that was made by her mother. Interestingly, she still has the dress with her in hopes that her daughters too might wear it someday on their weddings.

She shares three budding children with her husband Richard; two daughters named James and Holly, and a son, Jack. As of 2019, Lucy Kennedy is residing in Ireland with her husband and children.

Lucy's exact net-worth is still under review. Majority of her income is generated from her TV and radio-host career, which pays on average of more than fifty thousand a year. She also sold her house in Dublin for an undisclosed amount.

She stands 5 feet and 3 inches(1.63m) in terms of her height, but her exact weight is unknown.

However, she was notable for maintaining her body weight in a short period after giving birth to her baby. Due to her focus in a strict diet after childbirth that helped her to lose most of her body weight, she won Woman's Way Celebrity Mom of the year award in 2017.