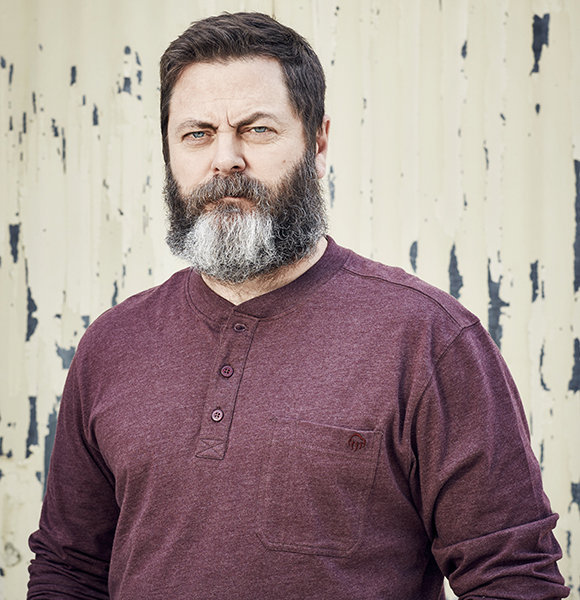 American actor Nick Offerman and his wife have been ruling as the power couple and their love is still as fresh like that of teenage love.

The couple's married life has almost touched the two decades of a relationship, however, they share no kids.

But without even no kids, the pair are growing stronger with their increasing age. In addition to their harmonious relationship, the couple is supportive towards their career and has been following two weeks rules to make their relationship stronger.

It's already an amazing feat how the Making It star is taking his woodworking career and married life hand in hand!

The anti-government bureaucrat Ron Swanson of Parks and Recreation is a married woman after he wedded the American actress Megan Mullally in 2003. However, even after their 15 years of married life, the couple remained childless.

The couple first met back in 2000 while they were rehearsing for the play The Berlin Circle. During that time, Nick was just aged 29 where his wife was in her early 40's.

At first, the couple was hitching up to be in the dating life as Megan disliked to date somebody she works with.

But when the rumor started swirling around, the couple started dating even before the play closed. After eighteen months of dating Megan, he proposed her in 2002.

And the day finally came when they were ready to be called husband and wife. On 20 September 2013, the couple invited 20 guests calling for the small-get together. But only upon their arrival, the guest got to know that it was Nick and Megan's Wedding day. After their wedding, the couple moved to Hollywood Hills into their 3,803 sq. foot house where the couple spent their glorious years together.

In an interview with GQ in May 2017, the power couple stated that the childless relationship is the main ingredient to their married life. And when they were asked if not having kids was intentional or strategic, she described claimed it to be more complex.

"I never had a burning desire to have children. But then I met Nick, and I thought “This is the only person I’d do this with.” So we tried, but I was a little long in the tooth for that sort of thing."

But they are the parents to the little poodles whom they have raised like their own kids. Similarly, their harmonious relationship has been the topic of curiosity for many of their fans.

In an interview with Today back in October 2017, while the interviewer asked the couple about their long-term relationship. The couple claimed that compromising is the main factor that has taken their relationship to this further.

Woodworking Career; Net Worth In Millions

Nick Offerman-aged 48, is known for his roles in Parks and Recreation, but beside his acting skills, his fans are on the shed about his woodworking skills.

He learned the basic woodworking skills since his childhood from his father, uncles, and grandfathers.

Though he graduated with the degree of theatre, he opened his woodshop in Chicago and broad his hand on both careers, acting, and woodworking. Also, his woodworking helped him to commence his acting career as he used his savings from woodworking into paying bills for acting.

He has beautifully separated his two professional lives. He is not an actor in the woodshop; he is just a woodworker in a woodshop. Since his acting career counts 21 years, he has seen many phases of the Hollywood industry.

And on 6 October 2018, the comedian couple is set via their tour to make the audience laugh with their comedy shows in Curran Theatre, San Francisco.

With his dedication towards the acting and Woodworking, he has accumulated the net worth of $4 million. Similarly, his actress wife has also piled up his net worth to $15 million.