By LRU Writer | On: February 20, 2019
Noah Reid is in a relationship. He is dating his girlfriend...who goes by the Instagram name...Noah has been involved with...his partner for...They are often witnessed together and their relationship is Instagram official... 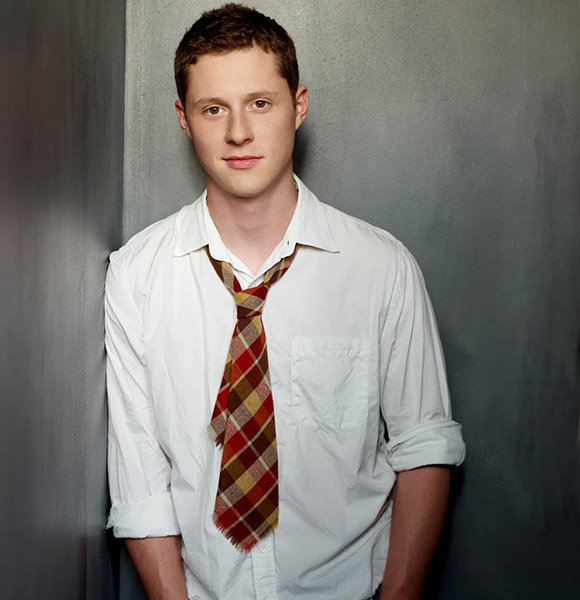 For stars who portray gay characters, it's obvious for their admirers to speculate them as one in real life as well. Many stars have gone through that, and here we're talking about another victim of the same rumor, Canadian actor Noah Reid, known as the titular character on the 2015 series Kevin from Work.

As far as his gay speculations go, there seems to be no truth in it as his current girlfriend dodges off every gay rumor linking Noah. Indeed, he has been romantically involved with his girlfriend which has silenced the rumors.

Well, take a look at the relationship that Noah shares with his partner.

Noah Reid, who has won a Canadian Screen Award nomination for Best Original Song for his work in the feature film People Hold On, shares undying romance with his girlfriend.

While he breaks the hearts of his admirers, his bond with his girlfriend is a relationship goal. Noah has been dating Clare Lydia Michelle who goes by Instagram name @clarelms.

It seems that the pair has been together for a long time now as they have made their relationship Instagram official and their pictures date back to a few years. Even though how they met and fell in love is still a mystery, looking at what they share, it seems that they are meant for each other.

Clare often appears in Noah's Instagram while he shows his appreciation for having her in his life.

Noah made sure to acknowledge her presence in his life during the special occasion of Clare's birthday when he posted a picture of her while sending out birthday wishes for his girlfriend.

Noah shared a black and white picture of Clare while marking her birthday. Through the caption, he appreciated Clare's presence and divulged that she makes his life better in every way possible.

"Happy birthday to this absolute Queen of a woman who makes my life infinitely better on a daily basis."

Adding to it, he posted a picture of his and Clare's collage picture in which they both seem to enjoy the little moments with each other while making memories.

Likewise, the couple even shares similar interests in sports. Both Noah and his girlfriend Clare enjoys baseball games often attends the live games on the stadium. Noah and Clare visited Fenway Park attending the game between Boston Red Sox and Tampa Bay Rays back on 8 September 2017.

In the meanwhile, the couple also attends formal events together. Back in March 2016, Noah and Clare attended Canadian Screen Awards together. The pair made sure to have their formal pictures taken while they posed in front of old windows stacked up on the wall.

The couple had all smiles on the picture as they posed for Vanity Fair. Through the caption, Noah revealed that the picture was taken before he faced a "graceful" loss at the Canadian Screen Awards.

Apart from it, through the Instagram posts, it has been known that the couple often jets off to their romantic getaway to a different place. The pair enjoys exploring new places while sharing each other's company: they went off to Portugal to spend quality time in each other's company.

Noah, who is at the age of 31, posted a picture of him with his partner on his Instagram in which Clare had her hands wrapped around Noah while Noah takes a selfie. In the picture, both of them had all smiles as they enjoyed their romantic vacation. Well, not just for fun time, but Schitt’s Creek star is serious with his girlfriend too. He finally did the thing! Any guesses? Here is a hint! It involves something about a ring.

If you guessed about engagement, then you’re right. Noah proposed his longtime girlfriend Clare Lydia Michelle on 1st January 2019, and she said yes! Noah sure is a smart boy, since he asked Claire to marry him on New Year’s day, there will be no difficulty in remembering their engagement anniversary. Playing a gay character on-screen, Noah recently wooed his on-screen love interest David on his hit show Schitt’s Creek by serenading him. An expert in reel life Noah sure didn’t leave any stone unturned to propose to his lady love in real life also.

As for their marriage plans, they might not walk the aisle just yet. Probably, it will take some time to see them as husband and wife as it takes a lot of planning for decorations and invitations. Nevertheless, Noah and his fiancee will sure take their time to make everything perfect in their big day.

While Noah is totally straight in his real life and loves his girlfriend dearly, he portrays a very different character on-screen. Noah, who appears as Patrick in the television series Schitt’s Creek shares gay romance on the screen.

Patrick is involved in a serious relationship with Schitt's Creek character David Rose who is portrayed by Dan Levy. In the series they are the business partner turned lovers sharing serious romance.

However, away from the on-screen portrayal, Noah made a simple gesture of sending out birthday wishes to his on-screen boyfriend. He recently posted a photo of him with Dan and wished him birthday through captions while mentioning Dan as a fake boyfriend.

Well, even though their close friendship might have raised the gay speculations, Noah's girlfriend is the only answer to all the fake rumors.