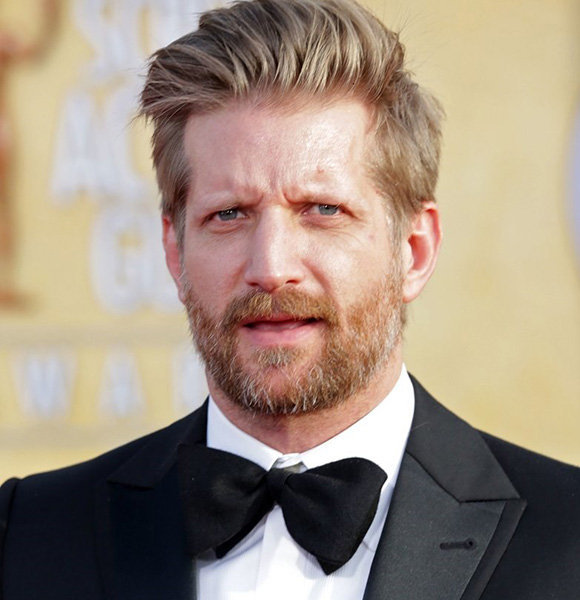 American actor Paul Sparks is considered one of the adorable and good-looking stars of Hollywood. He is best known for playing the role of Carver in the Matthew McConaughey, and Reese Witherspoon starred 2012 movie, Mud.

With over two decades in showbiz, the actor's contribution has not gone unrecognized. He has been nominated for several awards and even managed to bag some too.

For his performance in the TV series –  Boardwalk Empire, Paul captured the Screen Actors Guild Awards for Outstanding Performance, twice. In 2013, the actor won the Robert Altman Award.

Paul was born in Lawton, Oklahoma on 16 October 1971. He comes from a family consisting of parents: Michael and Jane Sparks. His mother was an elementary school teacher while his father was a football coach at Marlow High School.

As for his education, Paul - height 5 feet 11 inches (1.82 m) - graduated from Marlow High School in 1990. He also received a scholarship to study chemistry at Oklahoma State University.

But, following his passion, Paul joined New York University’s Tisch School of the Arts. He graduated in 1995 with a Bachelor's in Fine Arts, specializing in Drama.

Ever since Paul appeared shirtless in one of the episodes of House of Cards, women all around the world got fascinated by him. However, they are out of luck as the actor is happily married.

Paul married a fellow Hollywood actress named Annie Parisse in 2005. Just like him, his wife has also had a rewarding career in the showbiz. Annie had made her debut as Julia Snyder in the CBS soap opera, As the World Turns (1998 to 2001). Paul Sparks and wife Annie Parisse at the premiere of At Home At The Zoo on 22 February 2018 (Photo: broadwayworld.com)

Married for 14 years now, the pair is parents to two beautiful children. Their first child is a 10-year-old son named Emmett, while daughter Lydia was born in 2014.

Immediately after college, Paul ventured into the world of acting. Beginning with the theatre, he appeared on several stage performances like Taking Me Out, Blackbird, Orange Flower Water, and Buried Child.

Paul stepped off the stage and moved on to TV in 2010 playing the role of Mickey Doyle on HBO’s drama series, Boardwalk Empire. Although the show ended in 2014 after five seasons, the character got him the much-needed boost.

The actor has also made appearances in other TV shows & films including House of Cards, The Girlfriend Experience, The Night Of, Get Shorty, Waco, The Crown, Sweetbitter, and more.

With a rewarding career in the entertainment industry, Paul has grown to the height of stardom one can reach. Although his salary is not disclosed, the star reportedly earns more than the average of $50K.

Paul’s net worth is undoubtedly in the millions. He is also in possession of more liquid assets, i.e., cash after selling his Boerum Hill townhouse for $2.15 million in 2016.