By LRU Writer | On: April 25, 2019
American actress, Rachel Brosnahan may have been secretly married in 2018......She fueled up the wedding rumors she reached to receive her first Emmy-award with her loving boyfriend......Rachel, who played a married woman onscreen, raised wedding speculations when she and her lover flaunted matching rings on their left arms...... 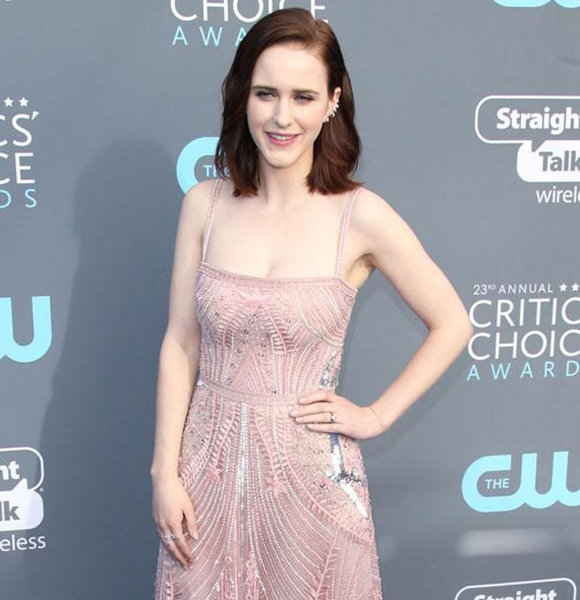 American actress, Rachel Brosnahan may have been secretly married in 2018. Well, reports suggest so!!

The actress best known for her role as Miriam 'Midge' Maisel in the hit Amazon show The Marvelous Mrs. Maisel, played a longtime married woman in the series, who gets dumped by her husband (played by Michael Zegen).

However, in real life, Rachel's marital status was unknown despite her years of relationship with actor boyfriend. But, earlier in 2018, she fueled up the wedding rumors after she reached to receive her first Emmy-award with her loving boyfriend.

So, has the beautiful actress taken a step further in her romance by turning her partner into a husband?

Let's address the wedding rumors of The Blacklist actress while also taking a tour around her dating life.

Rachel Brosnahan shared a passionate romance with her long-time boyfriend Jason Ralph, who is best known for his appearance as Quentin Coldwater on The Magicians.

Take a Look at: Erin Darke Getting Married? Rumored Wedding, Husband-To-Be Is 'Chosen One'

Reports suggest that the couple has been together for more than three years as they were first spotted dating back in 2015. The pair first crossed paths in 2014 when they shared the screen in the comedy-drama, I’m Obsessed With You (But You’ve Got To Leave Me Alone).

A year later, the pair worked together on the WGN series Manhattan, and since then they have been enjoying each other's company. It turns out, Jason has been escorting Rachel in tons of red carpet events, and they looked head-over-heels utterly for each other while appearing in those ceremonies.

Earlier this year, Jason walked alongside his lady to the 2018 Golden Globes which took place in January where Rachel grabbed herself the "Best Actress in a TV series" for The Marvelous Mrs. Maise. Likewise, he even accompanied her to the Critics' Choice Award where the Wisconsin native was named the "Best Actress in a Comedy Series."

Adding to it, Rachel and Jason also appeared together at the 2018 New York Theatre Workshop Gala which took place in April. The duo had remained low-key since then; but recently during the Emmy Awards in September, Jason and Rachel both made an appearance and raised wedding speculations when they flaunted matching rings on their left arms.

With their appearance at the Emmy Awards, the couple of three years stirred up wedding rumors. Various sources have reported of their secret wedding that assumably took place earlier in 2018.

According to a source at People, Jason and Rachel tied the wedding knot during a secret ceremony. While it is not that easy for the celebrities, who are exposed to the spotlight, to hide something as important as marriage; Rachel, now aged 28, seemed to have excelled in doing so. Likewise, another insider also opened up that Rachel often called Jason her "husband" while on the sets. However, her representative initially denied passing any comment on her personal life.

Well, the cat finally came out of the bag when Rachel revealed that The Magicians actor was indeed her husband and their wedding took place a while back on 6th June 2016, earlier than expected. According to Rachel, the reason behind why the pair chose to keep their relationship status private was Hollywood’s problematic double standards.

Before the talented actor shot to worldwide face via progressive Amazon show, The Marvelous Mrs. Maisel, she was not at the center of attention. After she became a global phenomenon, she was always asked about her relationship status on the red carpet. But her husband Jason, who was also the leading star of a relatively favorite show called The Magicians was never asked about his wife on the same events.

The different treatment allegedly showed how in the 21st century, women were still defined by their relationship. Thus, to tackle such behavior, the progressive duo chose to keep their marital status a secret for a long time.