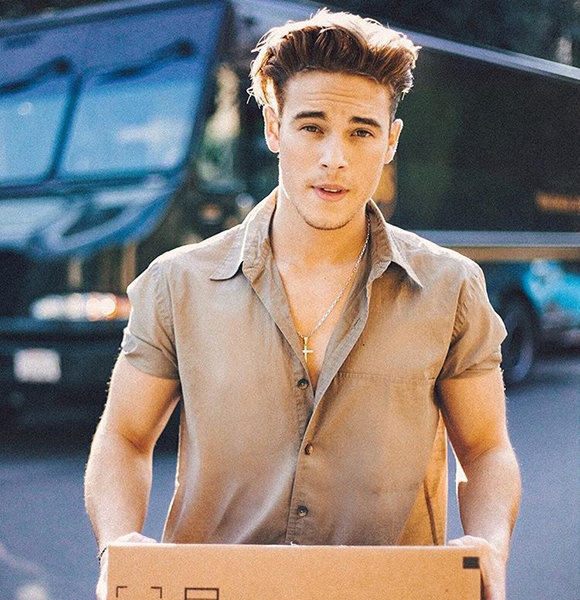 Ricardo Hurtado’s start in the showbiz was fascinating.

In just the first week of going out for auditions, he landed the part of Freddy Huerta in School of Rock. Then, he went on to star in TV shows, namely The Mick, The Goldbergs, and Speechless.

In 2019, Ricardo portrayed the part of Tyler in the movie and TV series titled Malibu Rescue. And, the show’s sequel Malibu Rescue - The Next Wave is also in production, the same year.

Who Is Girlfriend? Actor's Age

Ricardo’s dating life is filled with ups and downs.

The 20-year-old started dating Melissa & Joey actress Jada Facer in 2016. The pair’s romance began after they met at Nickelodeon studios. The young couple would sing cover songs together. Their rendition of Ed Sheeran’s Perfect was a major hit among the audience.

Further, Ricardo took his girlfriend to prom in 2017. He prepared an elaborate promposal for his lady love and even shared it on Instagram.

However, their love didn’t last as the pair parted ways in 2017.

After the breakup, Ricardo was linked to his Nicky, Ricky, Dicky & Dawn! co-star Lizzy Greene in 2018. But, neither party confirmed the news. Given Ricardo’s past relationship and link up with the opposite sex, questions regarding his possible gay sexuality never arose.

However, as of 2019, the actor’s dating status remains unclear.

Ricardo was always inclined towards performing due to his father, Ricardo Hurtado Sr.’s musical profession. According to the actor, his father’s side of the family is filled with musicians. His father grew up playing the piano while his uncle played guitar.

Interestingly, he can also sing and even play drums and guitar.

Thus, it came as no surprise when Ricardo took to both acting and music. In 2017, he released his Latin debut album titled Sun Tunes and sang the song titled Sun Sets - both in English and Spanish.

Talking more about Ricardo’s family: his father and mother Ofelia Ramirez are of Nicaraguan descent. They moved from the Central American country before the actor was born. Thus, he posses Hispanic ethnicity and American nationality.

As per his roles in TV shows, his filmography includes Nicky, Ricky, Dicky & Dawn, Glimpse, and Prince of Peoria.

Along with his acting talent, Ricardo has continued his passion for music. He boasts a YouTube channel with over 200K subscribers, where he posts cover songs and promotes his music.

In 2019, he released his English debut single titled Stay.