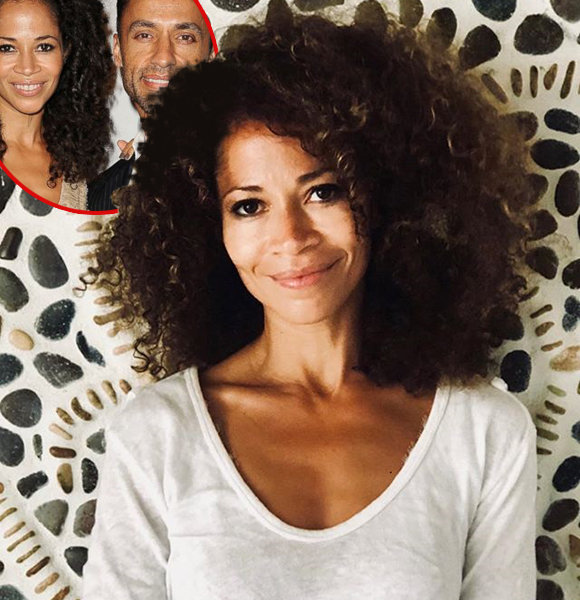 American actress Sherri Saum is best known for her portrayal of Vanessa Hart in the soap opera Sunset Beach (1997-1999). Sherri also gained recognition for her role as Lena Adams on the A.B.C. Family series The Fosters.

Further, she has also appeared in iconic music videos like Expose's As Long as I Can Dream, Dr. Dre's Let Me Ride, and Snoop Dogg's What's My Name.

Sherri still manages to keep a perfect balance in her personal and professional life with her busy schedule.

She has been in a happy married life with her husband. Keep scrolling to know more about her personal life.

Sherri Saum is married to actor Kamar De Los Reyes. Sherri met her husband in 2001 on the sets of a soap called One Life to Live (1968-2013), and they started dating instantly.

After being together for five years, the couple got married on 19 May 2007 in a very intimate Spanish-themed ceremony in front of their close friends and family. Sherri and her husband went to the U.S. Virgin Island of St. John for their honeymoon following the wedding.

He was born on 8 November 1967 in San Juan, Puerto Rico, to parents Walfredo, Sr., and Matilde. He grew up alongside two brothers Walfredo, Jr. De Los Reyes and Daniel De Los Reyes.

However, Sherri and her husband revealed that they were expecting twins, and the babies were delivered in 2014. She gave birth to twin sons, John Rubén De Los Reyes & Michael Luís De Los Reyes, on 13 May 2014.

Apart from her twins, she is also stepmother to her husband's grownup son- Caylen. Despite being a stepmother, she has a good relationship with Caylen. Caylen serves in the U.S. Army.

Even with her responsibilities as a wife and mother, she managed to perform fantastically in her career.

Sherri Saum was born on 1 October 1974 in Dayton, Ohio, U.S.A. She boasts mixed ethnicity from her African American father and Caucasian German mother. She completed her schooling at Oakview Elementary School, Kettering, and Fairmont High School. Later, she graduated from New York University with a major in psychology.

Sherri boasts a gorgeous body and stands at the height of 5 feet 7 inches (1.7 meters). Besides her beautiful body, Sherri is also blessed with naturally curly hair.

Sherri's career started at a very young age. During a Model Search America convention in Ohio, a modeling agency discovered her while she was in high school.

Later she moved to New York to pursue her career in modeling in the Big Apple. Her interest shifted towards acting, and she made her acting debut in T.V. Series Sunset Beach (1997-1999).

Saum was cast in a series of recurring roles in the Netflix fantasy drama series Locke & Key in early 2019, playing Ellie Whedon, a Matheson Academy instructor with a mysterious relationship with the Locke family. Throughout the spring and summer of 2019, she shared her time between Toronto and Lunenburg, Canada, filming and visiting her family in Los Angeles.

Sherri returned to Law & Order: Special Victims Unit in March 2022, but in a different character than the one she had portrayed almost nearly eight years before. The following week, she starred in Good Trouble as Lena Adams Foster, a state lawmaker and vivid sexter.

She has been well-established in the industry with her hard work and dedication. But she has not revealed any details about her net worth. But seeing her successful career, we can safely assume that her net worth is in the millions.

Stay tuned to get more updates on Sherri Saum.