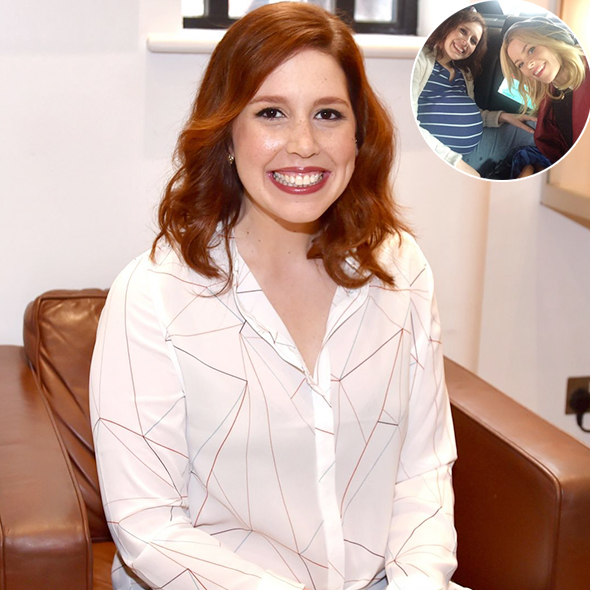 Everyone goes through a lot of ups and downs in their life, but you only live once and what really matters is how you live your life.

Millions have survived struggles and still managed to live their lives. Especially people who are battling cancer fight every day so that they can live one more day of their lives. SNL star Vanessa Bayer has a similar kind of story for her fans.

Vanessa was diagnosed with leukemia when she was 15. Though the Ohio native struggled with cancer for a long time, she was always confident and optimistic about the treatment outcome.

The Ibiza actress also became a Make-a-wish kid and had her wish of a trip to Hawaii with her family come true. She even thanks her struggles (fight with Leukemia) for what she has become now. Vanessa and her family smile outwardly for a photo (Source: People)

Vanessa always had a motivating family and a friend circle, which helped her during her battle with cancer. She was "not scared" during her cancer battle as her father and friends would make the funniest jokes based on her cancer, and in an interview with People on 30 November 2016, she stated,

“My dad is a really funny guy, and we would make jokes about my leukemia. When my friends would come over, we would joke about it too. It’s sort of messed up out of context, but it put everybody at ease. Being sick is the reason I went into comedy.”

After cracking jokes about her cancer, her interest in the comedy genre started to make a fuss. So, the Trainwreck actress often credits her experience with cancer for the incredible comic timing she possesses.

However, Vanessa has also been in dating and pregnancy rumors as a celebrity.

Seen as Ryan Gosling's wife in a skit titled Santa Baby, Vanessa did her job brilliantly on screen. The pair looked perfect in the skit: they cuddled over the enthusiasm and got overwhelmed by the idea of meeting Santa Claus.

However, in real life, there is no such fire between them. Instead, Vanessa has neutral feelings for Ryan, even though the actor is everyone's dream boy.

However, the rumors of their romance sound completely inappropriate as Ryan is very much loyal to his wife Eva Mendes and shares two children, Esmeralda Amada Gosling and Amada Lee Gosling.

The 40-year-old actress amazed her fans when her pictures flaunting a big belly swirled around the internet. Viewers started making the fuss that she was pregnant. But in fact, her big belly was not a baby bump but was instead for some acting job. In an interview with Cosmopolitan, Vanessa said she had no time for dating or a boyfriend since her work and career kept her too busy.

Moreover, there are no records of Vanessa engaged with any guy. Perhaps she is trying to keep her love life confidential.

Further, after her interview with Cosmopolitan, she is too busy working and maintaining her stardom. So, it's apparent that Vanessa is not dating anyone. She even stated,

"I moved to New York, and that's kind of a different dating scene, and my schedule with SNL is really busy, so it can be challenging to make time for dating. But I've also met so many fun and cool people that, in some ways, that's been a helpful thing for dating. I think it's changed for the better."

Since she was busy with her work with Saturday Night Live (SNL) since 2010, she went through many ups and downs in her career.

Vanessa has described her career plays a major role in keeping her busy. However, in 2017, she bid a painful goodbye to the show Saturday Night Live after seven years of being on the regular cast.

She got her first Emmy Nomination from the show and regarded the show as her home and the cast member as her family members. But she gave heartache when she disclosed that she was done with the show.

She did seven seasons with the show, and in an interview with Hollywood Reporter, she stated that she felt that it was time for someone else to do her job.

But after a year, in 2018, she again surprised the audience, this time with the delightful news of her coming back to SNL. With that, she became the longest-running female cast member in the show.

Being a cast member of Saturday Night Live since 2010 and acting in many small roles in various films and series like Trainwreck, Carrie Pilby, Office Christmas Party, Brooklyn 99, and Despicable Me 2, Vanessa Bayer owns a net worth is of $4 million. Currently, Vanessa is busy filming and will be seen in more movies and series in the coming days. Stay with us to get more updates on Vanessa Bayer.